Why don't all members of the Air Force have to be fully qualified to be a rifleman in case of hostile events? 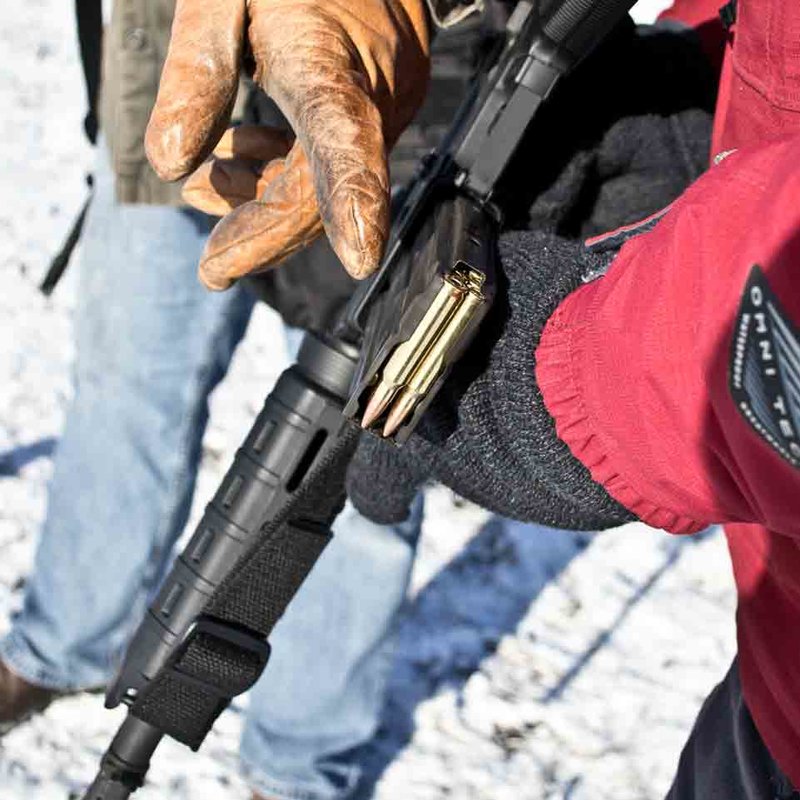 I have noticed through the years of being in the Air Force (Security Forces member here) that most people in the Air Force are clueless when it comes to M-4/M-16/M-9. This is outrageous! What are they supposed to do if the enemy comes knocking on our door step and everyone needs to fight. I have taught classes on the M-4 with communication airmen and have seen them completely mess up clearing out the weapon, loading it (magazine upside down or rounds the wrong way), and just completely incapable of achieving a zero on target after four rounds of firing. I am a big fan of how the Army and Marines teach that your are always a rifleman first. It almost seems like some of the Airmen don't expect to carry a weapon (ummmm why did you join the military in the first place)? I wish the Air Force would pick up on this to make us a more combat ready force. But, enough of me what are your thoughts?
Posted in these groups:

SMSgt (Join to see)
Posted 7 y ago
The Air Force was never intended to be a ground fighting unit. Back in the day, AF bases were protected by Army units for that very same reason. The ground fighting component of the AF is SF. Among our many duties, being the infantry of the AF is one of them. I started my military career in the Army and I will tell you that the AF as a whole was never designed to operate like the Army or Marines. The culture is completely different, and for good reason. The AF could not operate under the same culture as the Army or Marines. In SF, weapons are a tool for us. For the majority of the AF, a weapon is not a tool that they use in their day to day duties. ANd frankly, it should not be. I used to be CATM, and I can tell you that keeping an M-4 away from most AF members is a good thing.
(492)
Comment
(1)
show previous comments

CPO Nate S.
2 mo
My father was part of the flight crew on B52s. I don't ever remember him talking about qualifying with a weapon in the 50s/60s when he was in. The PJs and MPs are the only volks on the AF side I knew who had weapons on a regular basis. I think Security was separate from MPs, you know the folks that guarded some of the "special" aircraft.

In any event, just an old Navy Chief. But the AF could function in the same way as the USA or USMC. They have a very different mission. But, I do like PO1 John Millers meme. 100% spot on. In fact, I had some actual AF friends years ago (i.e., 1980s) suggest that is what they would do LOL!!!

Also, every pilot USA, USN, USMC, USCG, USAF that I have ever known had to qualify with the TO weapon 9M, 45, etc. as part of their overall survival skills, they needed to keep sharp. So, Col Joseph Lenertz Make a great and very serious point.

SSgt Kelly D.
14 d
I laughed when I read this as I went to AF basic training in the early 80’s. All of us learned how to shoot and disassemble and reassemble the M-16. It was a blast as I love to shoot. Unfortunately, some of the people on the line should never be allowed to handle a weapon but how do you know until you get them out there. After basic, we didn’t touch the weapon again so what was the point other than getting my expert ribbon…I don’t know. I do believe that we should all be trained and continue to qualify every year for readiness purposes as we have no idea where we would be stationed next.
(0)
Reply
(0)

1stSgt Nelson Kerr
6 d
SSgt Kelly D. - Training to tactfully prepare some and keep proficient to a rifleman standard takes weeks of traing per year, with people on the flight line working 12 Hours a day and 6 or 7 days a week where is that time coming from? Being a infantryman is a full time job
(0)
Reply
(0) 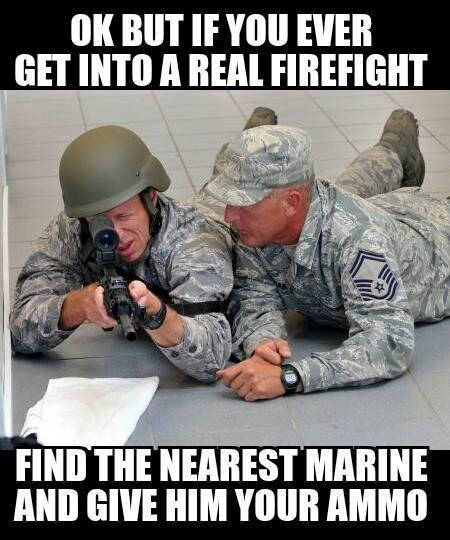 Completely in jest. I have seen people in all branches who should be permanently downloaded (having their weapons privileges revoked).
(374)
Comment
(0)
show previous comments

PO2 John Harker
15 d
In jest understood, I needed the chuckle! That said, I've seen AF personnel who could flat out scrap with the best. If you wind up in my foxhole and we're fighting off the enemy successfully, I don't care what branch you're in. If you need cover, I don't care what branch you're in, just don't get us killed. You know how to use an M9? Here's my sidearm, I need you to install a zipper on any of 'em that get within 30 yards.
(0)
Reply
(0)

PO2 John Harker
15 d
Col Joseph Lenertz My shipmates will keep you informed of incoming threats. I'll be in Fox 5 holding a perimeter so ya'll can coordinate with one another as needed. Or I may be in the engine room ensuring the ship's radar has power to spot those threats and launch you some backup.
(0)
Reply
(0)

Col Joseph Lenertz
Posted 7 y ago
Everyone sees things through their own experiences. If I were an AF Security Forces officer, I might share your opinion. As a pilot, I was required to qualify annually on my assigned personal weapon, the M-9, because aircrew members deploy more than other AF personnel. So far that makes sense. So why not go to the much bigger effort and expense of making us like the Army or Marine Corps and force every Airman to qualify annually? To put it as simply as possible, because there is a fixed amount of time and money, and there isn't an Air Force base in Afghanistan or Iraq or anywhere else we fight. When deployed, we generally either to deploy to large Airbases in-country with our Army, Navy, and Marine brethren (who are responsible to protect the base) or out-of-country where the threat is much lower (SA, Qatar, Bahrain, etc). I know there are exceptions, especially for our Special Forces community...but then they are qualified on their personal weapons, aren't they? In order to be the best at Our Job as Airmen, we spend our time and money on training aircrew, mechanics, and all the other support functions necessary to keep airpower supporting the Joint Force Commander. If we spent lots of time and money to be like the Army and the Marines, we would be better infantrymen but worse airmen.
(366)
Comment
(0)
show previous comments

SPC Lee Taylor
6 d
1stSgt Nelson Kerr - Well KID U BETTER do some research cause one was found in one of the Great Lakes and another off the shore of the east coast.
Oh and for the record American Indians are NOT the 1st people to live in America. White people are by about 4-5000 years. U demoncrats. I can tell u were never any good at ur job.
(0)
Reply
(1)

1stSgt Nelson Kerr
5 d
SPC Lee Taylor - You seem to getting your historicity from fantasy novel's or perhaps a bottle .I can find no source for either of those idiocies
(0)
Reply
(0)

SPC Lee Taylor
5 d
1stSgt Nelson Kerr - Well kid who did u brown nose to get to 1st Sgt??? I have 4 cr from 6 degrees. WHITE Skeleton were found in Washington state in a river, There was at least one found out east and TWO white mummies found in Alaska. So I do not even think u looked. Yeah I think u are the kind to lie and that u did in the military.

And they found one Nazi sub in one of the Great lakes. I found that a few years back and then there is one off of the upper east coast.
WISH I would have told the recruiter Yes rather than no on what I was offered with my dad there that had been an award winning recruiter. And I am pretty sure My ASVAB was way better than Urs kid and IIF u have any college I KNOW my scores for the college entrance test ARE way better than anything u even dreamed of.

Now that I have given u some direction go out and really do what u said u did. U Run into ur loser type.
(0)
Reply
(0)
Show More Comments
Read This Next
RallyPoint Home