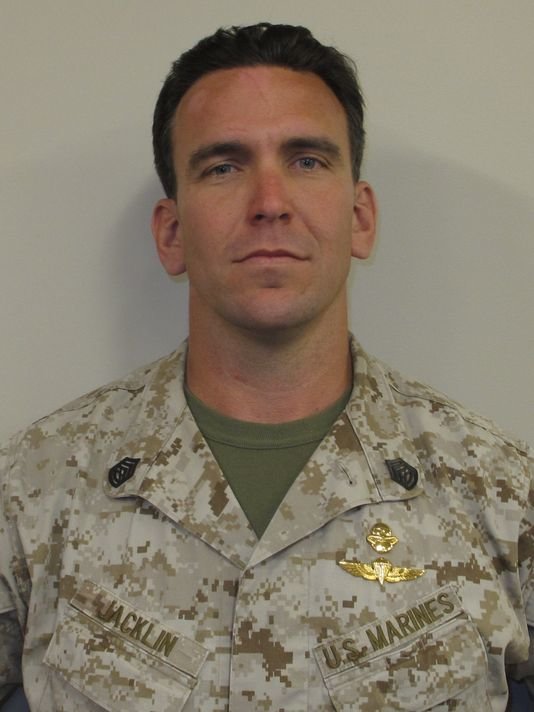 A MARSOC critical skills operator will receive the Marine Corps' second-highest award for heroism this week for bravery during a 48-hour standoff with the enemy in Afghanistan.

Gunnery Sgt. Brian Jacklin, of 1st Marine Special Operations Battalion, will be presented with the Navy Cross Thursday during a ceremony at his unit's headquarters at Camp Pendleton, California.

Jacklin earned the award for actions carried out June 14, 2012, while serving as an assistant leader of a team conducting village stability operations in the Upper Gereshk valley in Afghanistan's Helmand province, according to his medal citation.

That morning, the Marine special operations team was in a village compound when it suddenly found itself the target of heavy enemy gunfire. The attack left the team leader and another Marine critically wounded.

With the team's primary communications link inoperable, Jacklin worked to set up alternative communications with a nearby supporting unit. He called in direct and indirect fire and aircraft strikes on the enemy position, while working at the same time to coordinate an evacuation to get the wounded to safety.

Jacklin then led the team members out of their compound to set up a landing zone for a casualty evacuation aircraft, a task that required the team to cross open terrain under fire. When ongoing enemy fire forced the aircraft to wave off on its first attempt to land, Jacklin remained there, "raining M203 grenades on the enemy and directing the fires of his team" until the aircraft could safely land and evacuate the wounded.

Though the rest of the team would be relieved by another special operations unit that evening, Jacklin opted to stay behind and fight the enemy.

"Throughout a raging battle all the next day, he provided vital intelligence, tactical assistance and deadly accurate personal fires," his citation reads. "Throughout 48 hours, he inspired all around him as he led a vicious fight to defeat a determined enemy force."

During the same ceremony, five of Jacklin's fellow team members will be honored with the Bronze Star with combat "V" device for their role in the battle. The honored include Gunnery Sgt. William Simpson IV, Staff Sgt. Christopher Buckminster, Staff Sgt. Hafeez Hussein, Sgt. William Hall and Sgt. David Harris, all critical skills operators, officials said.
Posted in these groups:

CSM Michael J. Uhlig
Posted >1 y ago
Outstanding display of the Warrior Ethos and Warrior Spirit! These are the stories that need to be the headlines for our country to see! Well done Marine, I salute you!
(11)
Comment
(0)

SGT(P) Bryon Sergent
Posted >1 y ago
Not in the Corp, but I think my Marine Corps friends would say Semper Fi!
(8)
Comment
(0)

SPC Nancy Greene
8 mo
Me Eithet, worked as a Civilian Contractor at Camp LeJeune after Serving on Active Duty in the Army and I said “SEMPER Fi!”
(0)
Reply
(0)

SGT Ben Keen
Posted >1 y ago
A truly amazing example of leadership by all involved!
(7)
Comment
(0)