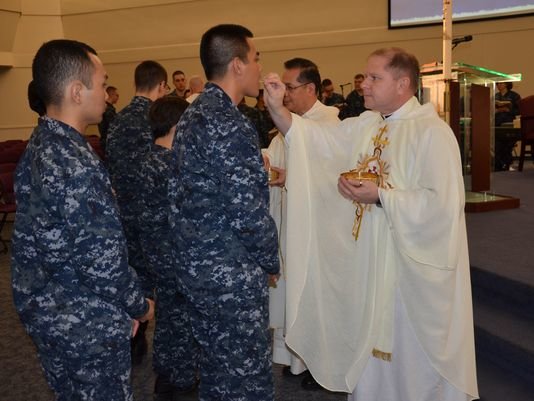 John Chantry, a practicing Druid, was shocked to receive an email April 3 advising him that he was prohibited from continuing to lead earth-centered religious services for recruits at Recruit Training Command.

Chantry, 72, says he has been leading services for between 75 and 200 recruits for about three years at the Great Lakes, Ill., facility. But on the orders of Capt. Doug Pfeifle, the commanding officer of RTC, civilian volunteers for seven minority religious communities have been asked to stop conducting services.

An RTC official who spoke on background said the volunteers were asked to leave in accordance with Navy guidance, which stipulates that a uniformed chaplain or a religiously accredited military member should conduct the service before the service pursues other avenues.

But Chantry, backed by the Military Religious Freedom Foundation and its outspoken founder and president, Mikey Weinstein, call the canceling of accommodations for minority religious groups a gross violation of the constitutional rights of recruits who practice minority religions, including Unitarian Universalists, Buddhists, Baha'i or earth-centered religions.

"It is extremely disappointing to us that some who sign up to serve aren't given the same kind of support ... as others, based on their religion," Chantry said.

On Wednesday, Weinstein penned a letter to the RTC commanding officer claiming that more than 250 recruits have been impacted by the order, and gave Pfeifle 24 hours to reinstate the civilian volunteers at RTC. Weinstein said he is prepared to exhaust all "administrative means" or even go to court to get the order rescinded.

"We have never seen a commander authorize such a sweeping abuse of the religious freedoms of those under their leadership," the letter reads.

The RTC official said the decision to change religious accommodations at boot camp was made to align with the Navy instruction. That instruction, the official said, calls for services to be conducted by a uniformed chaplain. If no chaplain is available, then an accredited military member should conduct the services, followed by a contracted chaplain or, if no one else can do it, civilian volunteers.

Recruits who practice minority religions will still be provided with time and materials during holiday routine to worship as they see fit. If recruits request a spiritual leader, the Navy will follow the guidance for identifying a suitable candidate, the official said.

The religions affected by the order include: Unitarian Universalist, earth-centered, Buddhist, Baha'i, Church of Christ, Christian Science and non-liturgical Protestant.

Naval Service Training Command spokesman Lt. Matt Comer reiterated in a statement that recruits will be allowed to practice religion as they see fit.

"As always, RTC will support the religious needs of all recruits and staff by providing them a place and time to worship as well as worship materials and chaplain support," the statement reads.

"The recent change in RTC practice regarding civilian volunteers adheres to Navy policy and reflects the religious accommodation standards and practices of the Fleet. RTC is currently recruiting uniformed volunteers to support all religious services."

But to Chantry, simply providing time and space isn't enough, and giving recruits access to chaplains who don't share their religion falls short of their needs.

"This means that we will have young people who have no opportunity to talk to people in their tradition about questions or concerns about their spiritual journey," Chantry said. "We have had people in our earth-centered worship services — whether Druid or Wiccan or heathen — who say that before they came here to RTC, they were solitary in their practice, that they couldn't find anyone who understood them.

"Now, for the first time in their lives, they had a sense that they were worthwhile."

To Weinstein, it is also a matter of safety, given that one reason recruits are given access to religious services is to bolster resilience, which can prevent suicide.

"Today the hundreds of affected sailors want to know why it is that they will no longer be allowed to practice their religion," he wrote. "They want to know why that one refuge, which has bolstered them so much during this trying time, is being swept out from under them. I would like to know as well, and soon the American people will be asking you the same question."

http://www.navytimes.com/story/military/2015/04/22/military-religious-freedom-foundation-mikey-weinstein-navy-boot-camp-recruit-training-command/26205131/
Posted in these groups:

MAJ (Join to see)
Posted >1 y ago
This one can safely be put in the category of "Navy, you just screwed the pooch."

It's true that Chaplains are charged with providing for the Free Exercise of all in their command. It's false, however, to pretend that they always can do so adequately. That's why things such as the Lay Leader program exist: to cover down on the gaps that the available Chaplains cannot authentically or properly facilitate.

The problem I have is that the command claims they need to use troops first, and outside volunteers second, but they made no effort to identify troops who could fill those roles before booting out the volunteers en masse.

This action has the SOLE effect of hurting minority religious views and injuring the Constitutionally required support of SM's free exercise, and is unethical for that reason.

Additionally, at a place like RTC, the majority of the SM's are going to be junior personnel, and thus would be both transient and unlikely to have adequate training to fill the roles, so the need for volunteers becomes that much more important.
(4)
Comment
(0)

SGT (Join to see)
Posted >1 y ago
Unless the Navy is supplying Unitarian Universalist, earth-centered, Buddhist, Baha'i, Church of Christ, Christian Science, and non-liturgical Protestant Chaplain's I do not see why they removed the Civilian Volunteers, this seems to be counter their own doctrine. All members of the Military should be able to worship freely. If we cut down our newest recruits, then we not get new ones.
(4)
Comment
(0)

CCMSgt Michael Sullivan Ph.D
Posted >1 y ago
I am a volunteer Chaplain at the West Palm Beach VA medical center. We have 3 full time Protestant Chaplains, 1 Rabbi and 1 Catholic Priest. 75% of the patients are Chatholic. The Priest gets Friday off, so I fill in for him. Not being a Priest I can not conduct a full mass or hear confessions but I can do all most everything else. As I make my rounds I have been asked to pray with a non Catholic. I have no problem as these men and woman are all vets and as a volunteer that is what I'm there to do is help.

I think the DOD is doing a bad job of recruiting Chaplins of all faith. How can the Navy get a suitably candidate if no one has had any training in that faith. If there is a local volunteer who is qualified and is properly vetted, I see no problem.
(2)
Comment
(0)
Show More Comments
Read This Next
RallyPoint Home