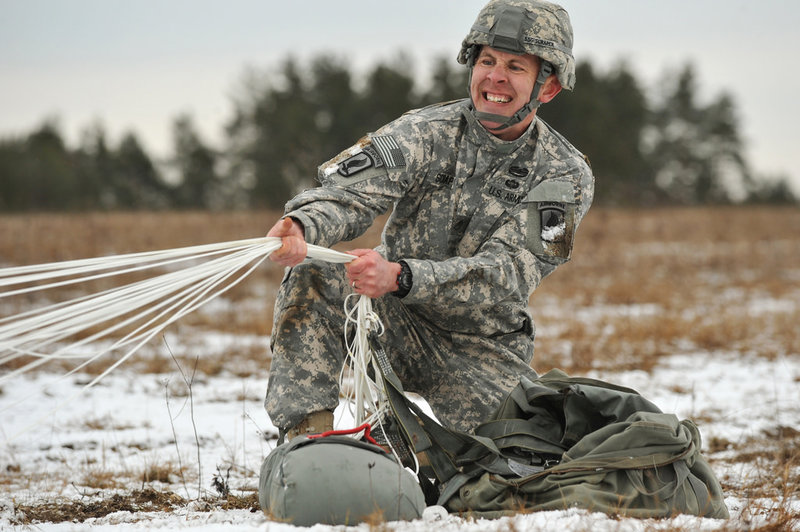 Soldiers often carry the concern that they are being assigned to or are in an airborne unit despite not being airborne qualified, and how this could impact their career.

Well, it won't negatively impact anyone’s career - unless they want it to. Being in an airborne unit, yet not being qualified, does not impact your career in any way actually. There are too many factors that limit airborne qualification. There are medical issues, such as knee problems, back problems, or not being able to pass the airborne physical for whatever reason. There’s also the modified table of equipment (MTOE) allowance; this is where soldiers are not slotted or allocated an airborne position in the unit.

Sometimes they may return back to the previous unit with an airborne tab, but not actively on airborne status.

The genetic makeup of the unit I was in was not airborne, but the other companies in the battalion were airborne units. We spent a lot of time supporting their airborne missions when they happened. I was assigned to the 95th Chemical Company, 6th Engineer Battalion, 2nd Engineer Brigade, 4-25 Infantry Division, located on Joint Base Elmendorf-Richardson (JBER) in Alaska. Outside of being the Pacific Command asset for chemical, biological, radiological, and nuclear (CBRN) matters, we also assisted the battalion with their airborne operations, ranging from providing transportation, shaking 'chutes, recovering parachutes, and other associated equipment procedures as necessary. This may be viewed as a negative thing because the word "detail" is associated with the task, but in reality it’s not. Being on this detail actually frees up soldiers to participate in operations and not cause a personnel strain. Often, airborne units need to rotate their jumpers due to inadequate amount of personnel available to support the “jump”, thus putting their “jump pay/stats/status” in jeopardy. Think of it as taking care of other soldiers and being a battle buddy. After all, this mission is bigger than you!

From a personal career standpoint, soldiers who are in these types of units and qualify to become airborne can request their Chain-of-Command to fill a vacant slot and attend airborne school. If you are haphazardly assigned to an airborne unit, but cannot be airborne for whatever reason, you can always request to be assigned to a support unit on the installation and carry on with your career as normal. This is normally the case when you are assigned to installations like Fort Bragg in North Carolina, Fort Drum in New York, Joint-Base Elmendorf-Richardson in Alaska, and Fort Campbell in Kentucky.

LTC Stephen C.
Edited >1 y ago
Posted >1 y ago
Excellent essay, SFC Randy Purham, and it all makes perfect sense. However, were I in an airborne unit (and I was), I'd want to be airborne qualified (and I was).
(15)
Comment
(0)

SFC Luis Colon
Posted >1 y ago
when I first got my assignment to fort bragg I was a young SSG, and I told myelf if I am going to be lead troops in an airborne environment I have to be airborne, so I got to the 82nd replacement as a leg, I was sent to my unit before going to Jump school and boy what an impact on my life that was, I was treated like a redheaded stepchild, but once I went to the training and show that I can hang I was very welcome to the unit.......... when I left the airborne and went to an non airborne unit, I found out that been in the airborne unit will get you molded for the rest of your life, and your attitude is totally different,
(13)
Comment
(0)

WO1 (Join to see)
>1 y
It does mold you and your personality to a point where you do not want to be in a leg/non airborne unit. Once you leave you have to not let yourself get big headed and think that it is the best thing since sliced bread. I have eased in the assignment I am currently at but at the same time I cannot wait to go back. I love the rush of jumping and performing duties as well.
(1)
Reply
(0)

1SG (Join to see)
Posted >1 y ago
I will not send a SPC or SGT to a board if he is not airborne qualified in an airborne unit. You are pro oting him to lead Soldiers. How can he lead Soldiers on the DZ if he can not jump out 9f the plane with has men. Good luck finding a BN Commander that would bless off on that promotion as well. Now I have seen legs assigned to an airborne unit, but if they wanted to stay they had to attend the school.
(8)
Comment
(0)
show previous comments

SGT Dani W.
8 mo
SFC James J. Palmer IV aka "JP4" that might still be the case, but a large amount of our the non-airborne Soldier's we get are from IET (majority go to airborne when get here), and then there are some people that we get that have been serving but aren't airborne. I think the reasoning is probably needs of the Army, it would be far more difficult for us to have full manning without being given non-airborne troops. I think you may have to be airborne to request to come here, but Army will do what it wants. I'd probably have to ask some non-airborne people that have been serving if they just got orders here or if they reenlisted for here.
(0)
Reply
(0)

1SG (Join to see)
8 mo
SFC James J. Palmer IV aka "JP4" due to funding cuts there are non Airborne slots within 82nd (the CAB and Sustainment BDE mostly). However, if you are earmarked for an Airborne slot transistion centers wont even cut the orders unless you sign documents saying you volunteer. If you are not already Airborne qualifed you will go from your new unit.
(0)
Reply
(0)

SSG (Join to see)
4 mo
The problem with the Army is that they have the wrong mentality in the upper levels of leadership. There is no problem having NAPs ATTACHED to an airborne unit, but they sure as hell shouldn't be allowed to wear the maroon beret or even the unit patch.
(0)
Reply
(0)
Show More Comments
Read This Next
RallyPoint Home