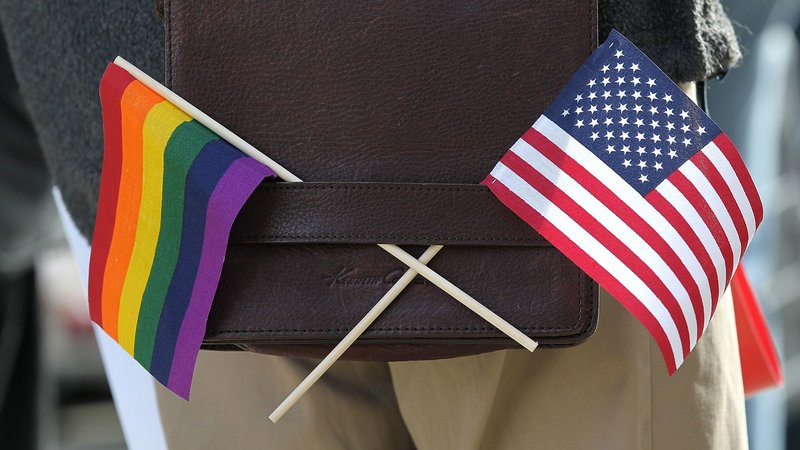 As June’s Pride month kicked off, the Biden Administration and lawmakers in Congress highlighted efforts to be more inclusive of lesbian, gay, bisexual, transgender and queer persons in the military and Veteran communities, addressing years of past discrimination and countering new restrictions of LGBTQ rights.

Department of Defense (DOD) Press Secretary John F. Kirby, speaking to reporters earlier this month, honored the “the service, commitment, and sacrifice of our LGBTQ personnel in and out of uniform.”

He said that one of Lloyd J. Austin III’s first actions as defense secretary was implementing President Joe Biden’s Jan. 25, 2021, executive order to ensure that eligible transgender persons can serve in the military openly and free from discrimination. Biden’s order also provided a path for service members to access gender-affirming medical care.

Kirby added that the DOD under Austin’s leadership is taking “concerted action” to promote and protect LGBTQ human rights around the globe.

Kirby said protecting the nation requires attracting talented volunteers to serve on — and service — aircrafts, crews and warships, and he said DOD leaders make “no apologies” for ensuring an inclusive workplace.

“If you (meet) the standards and you’re qualified to be in the military,” he said, “we want you to be able to do it free of hate and fear and discrimination.”

Inclusion is a work in progress

For the roughly 16% of active female service members and 5% of male service members who identified in a 2018 DOD survey as lesbian, gay, bisexual or some other sexual orientation, Kirby conceded these efforts are a work in progress. Indicators across several areas bear this out, both for LGBTQ personnel serving now and the estimated 1 million LGBTQ Veterans.

Military sexual assault: For instance, a RAND report released June 1, 2021, found that active duty service members who identify as lesbian, gay or bisexual or who did not identify as heterosexual are sexually assaulted at disproportionate rates. Yet DOD rarely examines this issue, the report said.

RAND researchers analyzed 2016 and 2018 data from workplace and gender relations surveys of active duty members. The data showed that lesbian, gay, bisexual or nonidentifying-as-heterosexual service members represented 12% of the active population. However, they were 44% and 43% of all sexually assaulted service members in 2016 and 2018, respectively. (The survey doesn’t ask about transgender identification at all.)

Compensation and benefits: LGBTQ advocates have long argued that policies such as “don’t ask, don’t tell,” in place from 1994-2011, and the recently reversed Trans Military Ban resulted in many harms, including the wrongful discharge from the military and denial of benefits from the U.S. Department of Veterans Affairs (VA).

A commission is needed to study the historic and ongoing impacts of discrimination against LGBTQ service members and Veterans, argued Rep. Mark Takano, the California Democrat who chairs the House Committee on Veterans’ Affairs. He introduced legislation to establish a panel that would hear testimony from service members and Veterans and their families, advocacy organizations and government agencies and issue remedial recommendations.

“Establishing this commission would help Americans understand the effects of anti-LGBTQ military policies, provide a path forward to rectify the injustices, and help create a welcoming culture for LGBTQ servicemembers and Veterans in the military and at VA,” Takano said.

In February, VA announced a wide-ranging review of services provided to LGBTQ Veterans and employees to ensure equity in delivery of medical and gender-affirmation care and procedures. In announcing this policy review, officials reminded LGBT Veterans that care coordinators are present at every VA facility. They can provide LGBT Veterans with access to primary care services, including hormone treatment and HIV prevention services such as PrEP.

Transgender health care: Another bill introduced in the House would prevent DOD from stationing service members who have transgender dependents in states or countries that prohibit or deny them gender-affirming health care and treatment, according to a statement by Rep. Jimmy Panetta, Democrat of California, lead sponsor of the legislation. At the state level, more than 20 new anti-LGBTQ laws have passed this year, many aimed at transgender people, according to the Human Rights Campaign.

List of VA programs for Veterans who are LGBTQ: https://www.va.gov/initiatives/recognizing-lgbtq-veterans-during-pride-month.

SSgt James Carter
1 mo
Exactly right!! Funny thing about incoming ordinance is that it is color and gender blind.
(3)
Reply
(0)

SSG Edward Tilton
Posted 3 mo ago
LGBTQRSTUVWXYZ. acknowledging that they are different so we can mandate their inclusion is silly
(16)
Comment
(0)
show previous comments

SGT (Join to see)
3 mo
SFC James Welch - I can guarantee you that anyone shooting at me will get one shot before I return fire and even at 70 years of age I can still put a 300WinMag round on target at 1100 yards.

SFC James Welch
2 mo
Why are you Anonymous? No courage of your convictions? You need to show your name or go somewhere else. SFC James Welch
(2)
Reply
(0)

SPC Robert Conway
2 mo
SFC James Welch the only people who are mentally unstable are those that mindlessly hate what they don't understand, like you.
(1)
Reply
(0)

1LT Neal Schwartz
15 d
It's just another distraction from the real issues. Notice they never think of promoting something everyone might agree on.
(0)
Reply
(0)