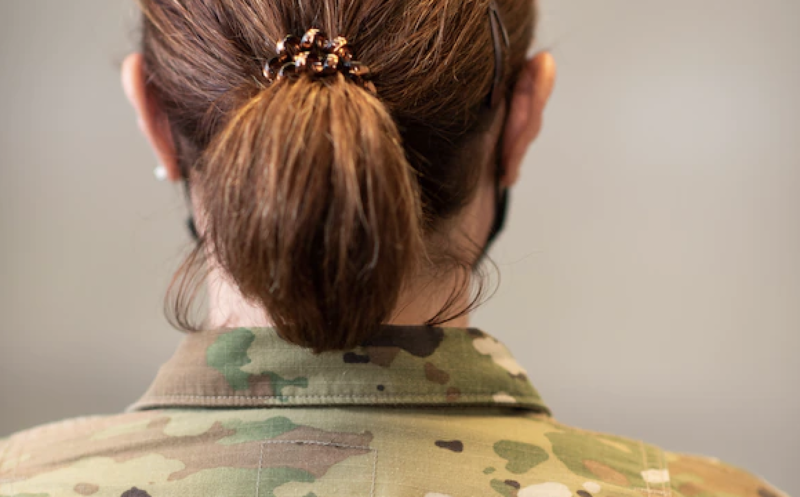 It’s official: As a female soldier, you can grow your hair to any length and wear it in a ponytail or another style, as long as it’s neat, doesn’t go beyond the collar or interfere with headgear or equipment. You can wear stud earrings in the combat uniform if not deployed or in the field, and put on certain shades of lipstick and nail polish.

As a male soldier, you can join your female colleagues in highlighting your hair in a natural color, or using nail polish, as long as it’s clear. But you still must shave your facial hair (unless you have a medical or religious exception).

These are among the appearance and grooming changes the Army added on March 2, 2021, to the newly updated Army Regulation 670-1, Wear and Appearance of Army Uniforms and Insignia, which became effective Feb. 26, 2021. The March 2 additions are an official part of the AR 670-1, but due to timing issues, were tacked onto the official document in an All Army Activities (ALARACT) message.

“I think this is really good for the Army,” said Sgt. Maj. of the Army Michael A. Grinston at a Facebook town hall earlier this year, where he previewed the policy changes, which generally apply to the regular Army, Army National Guard and the U.S. Army Reserve. He was accompanied by Sgt. Maj. Brian C. Sanders and Sgt. Maj. Mark Anthony Clark of the Uniform Policy Branch.

“These (standards) aren’t about male and female,” Grinston insisted. “This is about an Army standard and how we move forward with the Army and being a more diverse, inclusive team.”

Nevertheless, many of the changes appear aimed at improving recruitment and retention of female soldiers, who make up about 18% of the 1.01 million member Army, but exit at higher rates than male soldiers. A May 2020 Government Accountability Office (GAO) report found that the likelihood of separation for female service members across service branches is 28% higher than that of males. Factors cited for leaving include child care, family planning, organizational culture, sexual assault and work schedules.

GAO recommended that the Department of Defense develop performance-based plans to improve female recruitment and retention, and DOD agreed.

Grinston commended the diverse group of soldiers for suggesting the changes to leaders and for serving on the panel that considered and voted to approve the recommendations, which he said senior leaders accepted.

The process, Grinston said, broadened his outlook. “I used to say, ‘We’re all soldiers. I just see green,’” he said. “What I learned, even throughout myself, is that when you say that you don’t see me as a soldier.”

Some policy changes were based on the advice of experts in behavioral health, dermatology and other areas. For instance, Sanders said the panel found that previous rules requiring female soldiers to create buns from short hair led some to suffer hair damage or develop alopecia, which can lead to severe hair loss. Readiness was at issue in allowing long ponytails under certain conditions, Grinston said, by letting females fit helmets more snugly.

Additional changes promote diversity and inclusion by standardizing terminology in grooming and appearance, removing potentially offensive words to describe appearance such as mohawk or Fu Manchu, and allowing accents and hyphens to nameplates.

· Authorizing the carrying of bags, handbags, purses and backpacks and allowing combat uniform sleeves to be rolled up.
· Adding the Improved Hot Weather Combat Uniform as an authorized uniform.
· Implementing policy for the new Army green service uniform.
· Adding guidance on wearing of shoulder sleeve insignia for distinctive unit and military operations in hostile conditions.

With more than 100,000 signatories to a change.org petition asking the Army to allow facial hair in a garrison environment, Grinston was asked if male soldiers will be allowed to grow beards.

Although he said this “is not one of the things we looked at” in this review, Grinston reminded leaders that there are valid, authorized exceptions to the no-beard rule.

“If there is an exception to policy to have a beard, there should be no leader out there telling a soldier to shave,” he said. “We have to be better than that.”

Women in the Military
Posted 1 mo ago
Responses: 15

SSG (Join to see)
1 mo
It's been amazing! Less headaches from tight hair, loosened hair a little and using different styles to be professional and much less painful.
(8)
Reply
(0)

Lt Col Scott Shuttleworth
Edited 1 mo ago
Posted 1 mo ago
I have heard that the buns or pulled up gives headaches...plus it is difficult to wear caps and combat headgear. I am all for it...makes operational sense. Foreign governments have been doing this for a long time. Don't know if it helps with retention...changing hair styles and breastfeeding changes etc aren't the issues I am hearing about...I am hearing about sexual assault, harassment, just overall treatment of women in the ranks. Until we get that addressed and under some sort of control, hair styles etc won't mean a hill of beans...I don't think I will ever hear someone say "they let me keep my hair long so I am going to reup!" IMHO.
(12)
Comment
(0)

SPC (Join to see)
1 mo
Same here, I've heard seen and experienced those things I we should not tolerate it. It's truly insane and victims I know genuinely have interest in being/staying in the Army.

However I will say though these aren't the major problems that plague part of the force. I haven't asked others but I have been definitely been far more inclined to want to stay in with these changes. Large part of life is on-duty, feels better to live.
(1)
Reply
(0)

SFC (Join to see)
1 mo
Lt Col Scott Shuttleworth - Grooming regulations, breastfeeding, postpartum and sexual assault, harassment are ALL issues that females discuss. It's quite possible to have more than one cause. Those are all issues that needed to be addressed. Grooming regulations are the easiest one to tackle and change than a culture that has allowed sexual assault and harassment. That is going to take years upon years to change - just like how long it took to get these things changed. To get postpartum issues addressed. To get the Army to make a damn breastfeeding policy. So your honest opinion isn't really worth much honestly when those aren't things that really ever affected you.
(0)
Reply
(0)

Lt Col Scott Shuttleworth
1 mo
SFC (Join to see) no they didn't but they affected my airmen!
(1)
Reply
(0)

TSgt Ann Smith
21 d
SFC (Join to see) - No, it doesn't take long to change bad behavior. The hire ups just need to INFORCE the rules and kick da azz out who beak them. And stop victimizing the victims. TIMES-UP MF!
(1)
Reply
(0)

SSG (Join to see)
1 mo
From my personal experience being able to wear posted earrings, having different "relaxed" hair styles and doing up my nails isn't making me want to stay in.

I appreciate the changes, but it's not the reason I'm pushing for the next eight years. My female trainees are loving it, but as we change generations we might see these changes help in a larger scope.
(4)
Reply
(0)

TSgt Ann Smith
21 d
SSG (Join to see) - the AF has ALWAYS had the privilege to try and look like a girl in that baggy uniform.
(1)
Reply
(0)
Show More Comments
Read This Next
RallyPoint Home