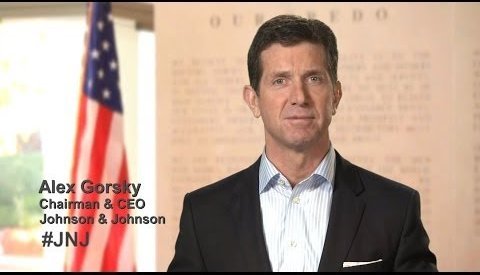 Alex Gorsky is the Chief Executive Officer (CEO) of Johnson & Johnson. Gorsky experienced a rapid and extremely successful rise through Johnson & Johnson (J&J) as well as other medical and pharmaceutical companies. Importantly, Gorsky is a former US Army Captain, a US Army Ranger School graduate, and Airborne qualified.

“Johnson & Johnson picked company veteran Alex Gorsky as its next chief executive, giving him the reins to a health-products giant that makes some of the world's most well-regarded medicines but whose reputation has been battered by quality problems at such iconic brands as Tylenol. The 51-year-old Mr. Gorsky will take the helm of J&J this April as it struggles to overcome the quality problems that have cost it more than $1 billion in lost sales and forced the shutdown of a production plant. . . Mr. Gorsky is a former U.S. Army Ranger who began his J&J career as a pharmaceutical sales representative in 1988 and has held leadership positions in J&J's pharmaceuticals and medical-device businesses.”

In a series of interviews in previous publications, Alex Gorsky credits the values, mentoring, and mission focus of the US Army as being critical to his career success as well as instrumental in leading successful business teams.

Here are a few of the outstanding business quotes where Alex Gorsky describes the full value he gained from applying his military skills to business.

Gorsky Lesson #1: Mission Focus & a Can Do Military Culture: “[T]he military’s CAN-DO culture has helped him in business. ‘There’s a general attitude in the military of trying to do everything possible to accomplish the mission. We have the same kind of commitment to improving patients’ lives. We face daunting challenges every day, and it’s important to do our best to come up with solutions.”

Gorsky Lesson #2: Mentoring & Coaching Is Essential to Building Talent. “David (a J&J employee) says Gorsky continued to mentor her even after he left J&J for Novartis, responding ‘almost instantly’ to emails and calls no matter where in the world he might be. “You have to be involved, and that means being approachable, making yourself available, and providing candid, specific feedback.”

Gorsky Lesson #3: Values and Purpose Are What Build Success for an Organization. “People want to feel like they’re working for a higher purpose, for something enduring. Johnson & Johnson’s Gorsky argues that focusing on “people and values” is a key strategy to sustainable success. Using his employer as an illustration, Gorsky mentions J&J’s decades-old “credo,” which speaks to the firm’s responsibility toward customers, employees, communities and, lastly, shareholders. The credo provides grounding for employees, he says, particularly important “at a time when everything seems to be changing.”

Gorsky’s military experience proved essential to his success in leading teams, achieving business results, and being selected as the next generation leader for Johnson and Johnson.
Posted in these groups:

SMSgt Dr. G. A. Thomas
Posted >1 y ago
Good to see our military service as an asset rather than a stumbling block
(3)
Comment
(0)