Those Four Words: My Transformation Through The USAF 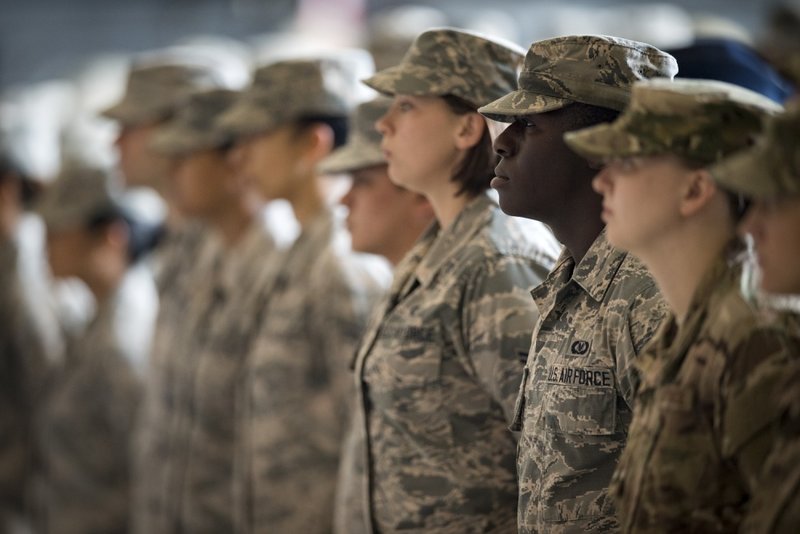 When I was a young, I remember my step dad taking our family to an air show in a nearby town. Enthralled by the different types of planes, the loops and barrel-rolls; I decided I wanted to be around airplanes. Every weekend we would drive past this small airport and I would crane my neck to see if one of the hangers were open so I could just get a peek at those planes once more. Years later, when I was in seventh grade, the movie “Pearl Harbor” came out, reinforcing my desire to work with planes. I remember telling my best friend, "When I grow up, I am going to join the Air Force."

At the time, it was just one of those things you say as a child without really meaning it. Only when another friend said, "I could see you joining", did I realize that I had to either do it or call my bluff. I decided the best choice would be to tell them I had changed my mind. I didn't think I could do it. But this meant that when I graduated high school, I had no plan. So after graduation, I ended up working in part-time jobs as a waitress, clerk, and finally a cashier. Due to the my inability to support myself, it finally became apparent that I was becoming more of a burden to my parents than anything else. They finally gave me my ultimatum. "You have a choice", they said. "You can either go live with your father or you can join the military." If you knew the relationship I have with my birth father, you would know that I would choose living with him when hell froze over. So, I chose the lesser of the two “evils” and decided to join the military.

The next choice I had to make was which branch I’d enlist in. We narrowed down my options to the Navy or the Air Force. I am terrified of going underwater and drowning and would rather be shot than drowned. This ruled out the Navy for me (plus there was nowhere to practice swimming). My older brother was already in the Air Force, so I had an "in" as far as information about what it was really like. Decision made - I was "off into the wild blue yonder" as our song says.

After the decision was made, it was time to meet my recruiter and take the ASVAB (Armed Services Vocational Aptitude Battery). After the test, the proctor took me outside the classroom and asked what I wanted to do in the Air Force. I said, "Something administrative. Why? Did I do bad or something?" He told me "You can do anything you want. You made a 92." I was shocked! I had been out of high school for about four years. Most of the other students around me failed, and some of them were still in high school or currently in college. Upon receiving my test scores, my recruiter asked if I wanted to become a linguist. Of course I did! I went to Dallas, TX to take my next test, the DLAB (Defense Language Aptitude Battery) which I barely passed with a 105; passing for the Air Force was a 100. My next step was waiting for a job opening to drop. I was in the DEP (delayed enlistment program) for a year. Finally, the phone call came. There was a job opening for me and a date to ship off to basic: April 19, 2011.

I will never forget the day I left - trying not to cry as I surreally told my mom and stepdad goodbye. It wasn't like I was really leaving. After all, I was still in Texas so technically I was still at home. Our group drove to Dallas from Waco. We spent the night at the hotel and I tried to calm my nerves. This was my third or fourth trip to Dallas...but this time, I knew I wasn't going back home the next day. The next morning I woke up early, rushed to get everything ready and get downstairs for breakfast. I wanted to do everything right. I found the kids that I connected with on the way down and we stuck together. After breakfast we got on the bus for our five hour drive to San Antonio. We arrived in the afternoon and I expected sergeants or TI's to jump on the bus and start yelling at us but they didn't. After a few hours of boring in-processing, my group and I got separated. I was now on my own. My first encounter with a TI was when I was escorted to my dorm. Her name was Senior Airman White. She was a skinny African American girl about my height. She saw I was wearing the Air Force t-shirt my recruiter had given me for joining. It was the nicest shirt I had at the time which was why I wore it. Little did I know then, but it was also a sign recruiters had with TI's letting them know to be hard on a particular person. She yelled in my face, "Who told you to wear that shirt?"

"No one told you to wear that shirt? You just wore it on your own?"

"Take it off and turn it inside out. You are not in my Air Force yet."

Off came the shirt, I turned it inside out and put it back on. That night I remember thinking to myself, "What did I get myself into?” as two tears silently ran down my face. It's not like I had much of a choice though. This was where my life took me. I was either going to get through this or die trying.

Fast forward a bit: I would cry almost every night because I was so stressed and couldn't figure out how to deal with this new life I threw myself into. I had to learn how to work with females who got their feelings hurt at the slightest "insult", encourage females who just couldn't make it through one more night, think for other females who, sometimes to this day, I wondered how they made it that far in life (this coming from a pretty sheltered girl). Loyalty was another thing I learned a lot about. Loyalty is not just given. It is earned. I remember the first time we really screwed up as a flight and our TI, SSgt Glover, was mad at us. The females were saying things like, "I feel like I just let my dad down."

"Psh, I don't." was my reply. I didn't care if he was disappointed in me. Who was he to me? Just some guy who was in charge of making sure I stayed alive during this training. That is, until I found out he cared about us. I was very sick one week to the point that I lost my voice. My marching and drills were just not on point like they should have been. He halted our flight and came around to where I was standing. He bent down and shoved his binder inches from my face. "Trainee Chiles, what is the matter with you? Are you sick or something?"
"Sir, Trainee Chiles reports as ordered." I squeaked, "Yes sir, I am." I don't know if he really expected that response. He told me that we were going to be marching by the clinic in a bit and I was to stay there and get seen. I could feel a tear welling up because I knew then that he cared. Unfortunately, I was unable to wipe the tear away before he saw it. "Is that a tear I see running down your face? Get that off of there!"

After eight weeks of training, drills, classwork, sand, sweat, and grime, we finally graduated. I have never felt so much pride as I did during our Airman run. We sang jodies with our TIs as we ran by our parents - the perfect picture of fitness. Then came the day we got our Airmen coins. I can still feel the heat on my toes through my black patent leather low-quarters. I was in the front row too, no one to block the sun from my feet or my eyes. I remember waiting for my parents to come tap me out of formation. I was almost panicked because I didn't see them coming. I didn't want to be one of the last ones. Then I heard it. Those four words that I had never heard my parents say, "I'm proud of you."

Although I have had a few times that I wished I could go back and undo some of my mistakes, I really think that life forced the right decision on me. Before I joined, I was very sheltered. I am the youngest of eight children. I always had someone telling me what, where, when, and how to do things. I never really had to think for myself until I got to BMT. If I had undone those mistakes, yeah maybe I would still be in Texas, working at a desk job somewhere, and possibly hating the job. Instead, I am here. I may not like the monotony of my job now, but I have traveled to some places I wouldn't have otherwise. I have tried foods I had never heard of before, I have learned a little bit of a new language. But most importantly, I have made a life for myself.

And they are proud...of me.
Posted in these groups:

SFC James J. Palmer IV aka "JP4"
Posted >1 y ago
This is a superb write up SSgt (Join to see)! Command post is a great forum for this stuff.

SSG Diane R.
Posted >1 y ago
SSgt (Join to see) thanks for sharing this great anecdote! You're a great Storyteller. ♡
(7)
Comment
(0)

SSgt (Join to see)
>1 y
Thank you this actually started out as one of my English papers for college. Another command post entry sparked my desire to share this.
(3)
Reply
(0)
Show More Comments
Read This Next
RallyPoint Home