Should We Be Upset At Those Who “Dodged The Draft”? 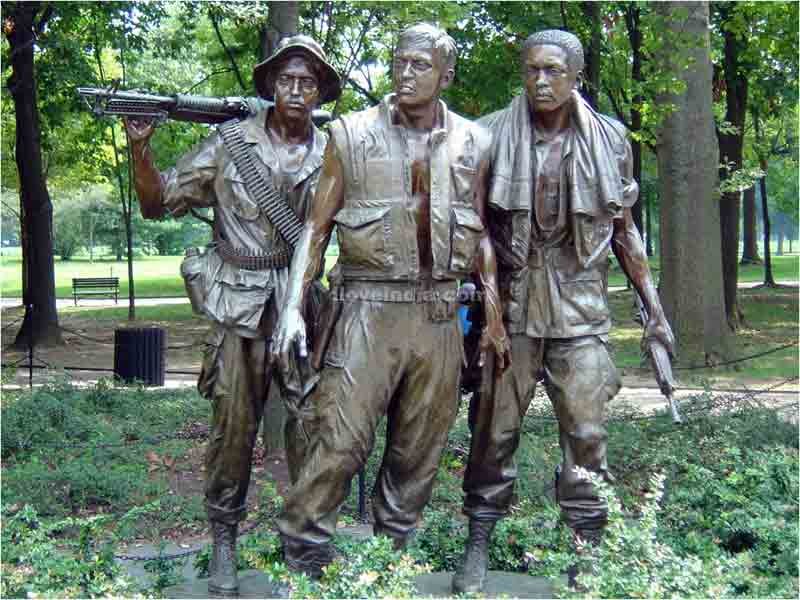 I’ve seen a number of posts elsewhere provocatively calling President Trump a “draft dodger” for utilizing three educational deferments and one medical exclusion during Vietnam. I know this can be a sensitive issue for many of us who have served. Many of my military friends seem to want to pile on, and comment with disdain over his actions, and this issue. Some of this is just politics, for others it’s more personal.

I’d like to present a position here that may be unpopular with some. As a freedom loving American who voluntarily served in the US Army and Michigan National Guard for 22 years, including a tour in Iraq (2004-2005), I am thankful that I’ve never had to contend with an active draft. Most of us here have served in the military. Most of us served voluntarily; some were forced to “serve”. I’ve heard some who were conscripted say they are thankful they ended up in the military, or that they were thinking about volunteering anyway. I’ve also heard some say it was the worst thing that’s ever happened to them. There are still others who can’t comment because they didn’t make it back alive.

Most of us who joined the military will tell you they served to protect the freedom that is America, and we DO enjoy a great many freedoms that people in other countries do not. Now for the controversy. Can we include a draft as one of those freedoms? I contend we cannot. I’ve heard arguments for the utility, and necessity of a draft to fight our wars. But what is a draft when we REALLY take time to consider its nature. I’d like to place two definitions below to set the premise that guides my thinking on this issue. (I always use Merriam Webster for consistency’s sake.)

Servitude: “a condition in which one lacks liberty especially to determine one's course of action or way of life.”

Slavery: “a person held in servitude as the chattel of another
: one that is completely subservient to a dominating influence“

Given these two definitions, it’s hard to argue that a draft doesn’t, at best fit the first definition, and at worst the second. When confronted with being drafted, we are given a “choice” either go to war, put your life in danger and do what you’re told, or go to jail. It’s a false choice, because either way you lose the choice to determine your life’s course of action, or you become a slave to the prison system. When I’ve made this argument, the replies, and questions seem to indicate that it’s ok to draft people for a host of reasons, and I have a host of reasons in disagreement.

“It’s a price we have to pay to live in a free country.”
Are we really free if our government can place us into servitude, or slavery without due process?

“Other countries do it.”
We’re not other countries. We’re America, and we abolished servitude, and slavery over 150 years ago. Why would we want to resurrect slavery to fight wars?

“How can we count on volunteers to enlist in great enough numbers to fight our wars?”
How about we offer commensurate pay and benefits that will draw enough citizens to volunteer? If that doesn’t work, perhaps our government should re-think the necessity of that particular engagement.

“Don’t you find it dishonest to use deferrals, or medical exemptions to avoid the draft when others didn’t do so?”
Those deferrals, and exemptions were legal, weren’t they? Would you call taking your mortgage interest deduction, or other legal deductions to lower your tax liability as dishonest?

All of these questions, and answers, are ancillary though, because these questions ALL avoid, bypass, or totally ignore the basic premise that a draft is based upon involuntary servitude at best, and slavery at worst. So, when someone gets all up in arms about President Trump, or anybody else “dodging the draft” by taking legal deferrals, I say, “I don’t blame them”. I tell them I didn’t blame President Clinton for avoiding the draft, and I don’t blame President Trump either. My support of President Clinton in this regard back in the 1990’s certainly caused some consternation among my Republican friends. It’s the price one pays for being philosophically honest, and consistent. Some have asked, about those who fled the country to Canada to avoid the draft, while others went along with it and were deployed to Vietnam. My answer is that I didn’t blame black slaves from fleeing slavery to Canada in the 19th century nor do I blame anybody else for fleeing to Canada to escape our slavery of the Vietnam era.

I understand that the military isn’t for everybody, and we don’t want just anybody fighting next to us. I want people fighting next to me who volunteered. Someone who has that special love of country, of service, and of unit that promotes an effective force.

In summary, I start from the basic premise that a draft is involuntary servitude/slavery, and therefore I can’t blame anybody for avoiding such bonds, either within the system of deferments, and exemptions, or outside the system by fleeing the country. America is a great country because we did away with things like slavery and spearheaded the concept of economic and individual liberty. These concepts led to the greatest worldwide advancements of production, technology and efficiency ever known previous to the founding of our great nation.

I’m sincerely interested in your thoughts, comments, or questions on this issue.
Posted in these groups:

Maj John Bell
Edited 16 h ago
Posted >1 y ago
For those who chose not serve and stuck around to face the music. I disagree, but respect.

For those that avoided service, but used the rules to do it. I don't like it, but harbor no ill will. "The rules is the rules."

For those that ran, they made a choice and they should have been forced to live by their choice. I don't like them standing on American soil, breathing American Air, and enjoying American freedom. I forgive, but do not forget. I don't go looking for a pissing contest, but If they bring up the subject, I'm not going to pussyfoot around it. They are not to be trusted.
(204)
Comment
(0)
show previous comments

Maj John Bell
1 mo
PFC Timothy McCarthy - You are correct, my mistake, the first draft lottery was held on December 7, 1969.

Who Has To Apply For The Draft?

The draft for the U.S. Military has a long and interesting history. Learn about the many manifestations of this defense policy here.

CPT John Miller
16 d
SP5 Stephen Sossaman - Good reply, I also do no hate the President. I feel sorry for his shortcomings and wish we had someone who was not a big baby everyday on twitter. But we get the leaders we deserve.
(1)
Reply
(0)

Sgt (Join to see)
Edited 1 y ago
Posted >1 y ago
I agree with you that I want men and women serving that are joining of their own free will. I do not agree with you that a draft is slavery. I volunteered and knew that I would be going to Vietnam. I never gave any thought to draft dodgers. What bothered me were the scum bags that greeted me at LAX when I returned from Vietnam. They tried to block my way, asked me how many babies had I killed, told me to repent for my sins, etc. I was in uniform flying military standby. One of the hardest things that I have ever done, was not confronting these scum bags.
(168)
Comment
(0)
show previous comments

LCpl Mario Pina
1 mo
Like wise,we had items thrown at us and booed
(1)
Reply
(0)

SGT Doug Blanchard
26 d
Had a similar incident happen when I flew home on leave after graduation from BCS/AIT. I was in my Class "A" uniform, as that is what they required us to wear back then.
There was some local hippie types at the airport when I deplaned. I was greeted with taunts, name calling, had someone throw a milkshake on me, and such. I and another soldier that was changing flights locally just looked at each other, we must have read each other's thoughts though, as we told them thank you and it shocked the crap out of them when we did. I further explained to them that they should actually be the ones saying thank you for having the freedom to do what they did to us, even though I felt like knocking some heads together.
But Sgt Hallock, THANK YOU FOR YOUR SERVICE AND SACRIFICE, from this Cold War Era Veteran.
(1)
Reply
(0)

SGT Clifford (Mug) Hall
Posted >1 y ago
As a Viet Nam era enlistee I chose to enlist. I didn't run off to Canada. I am admittedly more upset with folks like Kerry & McCain that embellished their own record, profited from it and have become national embarrassments. Lack of information is the biggest enemy. If the reasons were legitimate I have no problems with deferments.
(112)
Comment
(0)
show previous comments

SGT Pete Padilla
26 d
Mcain spent 5.5 years in the Hanoi Hilton. He was wounded and tortured. How did he embellish. Kerry was wounded twice.
(3)
Reply
(0)