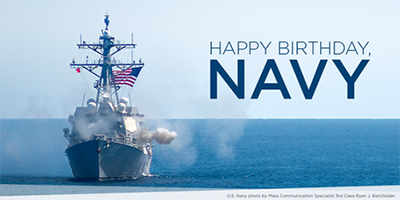 Today, on Oct. 13, the U.S. Navy turns 246 years old. That’s the day in 1775 that the Continental Congress issued a resolution calling for “a swift sailing vessel” to be fitted for 80 men and 10 carriage guns, with the ability to set out for a three-month cruise. (It was later, on April 30, 1798, following the Revolutionary War and amid tensions with France, that President John Adams signed the law establishing the Department of the Navy.)

As the Navy heads closer to its quarter millennial mark, here are just a few notable “firsts” in achievement within the second-oldest service branch:

First African American Medal of Honor recipients (U.S. Navy): Aaron Anderson (1811-1886; true name, although listed in records as Sanderson), Robert Blake (unknown), William H. Brown (1836-1896), James Mifflin (unknown), Wilson Brown (1841-1900), John Lawson (1837-1919), Thomas English (1819-1868) and Joachim Pease (1842-not listed), various naval ranks. This group of eight sailors were among the 26 African Americans who received the first Medals of Honor for service during the Civil War. According to citations listed by the Congressional Medal of Honor Society, the sailors were commended for these variety of acts:

Anderson, serving on the U.S.S. Wyandank, fended off “devasting” enemy fire in the clearing of Mattox Creek, Virginia.

Blake, who fled bondage to serve on the U.S. Steam Gunboat Marblehead off of Legareville, Stono River, in South Carolina, was honored for actions on Christmas Day, 1863: “Serving the rifle gun, Blake, an escaped slave, carried out his duties bravely throughout the engagement, which resulted in the enemy’s abandonment of positions, leaving a caisson and one gun behind.”

William H. Brown, on board the U.S.S. Brooklyn during successful attacks against rebel gunboats defending Fort Morgan in Mobile Bay, Alabama, was honored for staying in his powder division position during “furious action.” He is the only one of the eight sailors that the society lists as being buried at Arlington National Cemetery.

Wilson Brown was on the U.S.S. Hartford during that same attack on Fort Morgan: “Knocked unconscious into the hold of the ship when an enemy shellburst fatally wounded a man on the ladder above him,” his citation reads, “Brown, upon regaining consciousness, promptly returned to the shell whip on the berth deck and zealously continued to perform his duties, although four of the six men at this station had been either killed or wounded by the enemy’s terrific fire.”

Lawson, also serving as landsman on the U.S.S. Hartford, stayed at his post despite being hit and wounded in the leg by an enemy shell that had killed or severely injured his six-person crew.

Mifflin, an engineer’s cook also on the U.S.S. Brooklyn at Mobile Bay, “remained steadfast at his post and performed his duties in the powder division throughout the furious action(,) which resulted in the surrender of the prize ram Tennessee and in the damaging and destruction of batteries at Fort Morgan.”

English served on the U.S.S. New Ironsides in attacks on Fort Fisher during December 1864: “When the enemy came out of his bombproofs to defend the fort against the storming party, the ship’s battery disabled nearly every gun on the fort facing the shore before the cease-fire orders were given by the flagship.”

Pease, the citation says, served with gallantry under fire as the No. 2 gunman on the U.S.S. Kearsarge when that ship destroyed the Alabama off the cost of Cherbourg, France, in June 1864.

Born in Montserrat, West Indies, and buried in Queens, Sweeney earned his first award while serving on board the U.S.S. Kearsarge, at Hampton Roads, Virginia. On Oct. 26, 1881, his citation reads, he jumped into a strong tide to save a drowning shipmate. He earned the second award while serving on board the U.S.S. Yantic at the New York Navy Yard. On Dec. 20, 1883, a boy named A.A. George fell from a nearby ship, the U.S.S. Jamestown, into the frigid waters below. Sweeney and another sailor dove in, performing another successful rescue. According to the U.S. Navy League of the United States, Sweeney is just one of 19 service members to receive the nation’s highest military decoration twice.

First woman to serve in any branch of the U.S. military in a nonnursing capacity, Loretta Perfectus Walsh (1896-1925), rank of chief yeoman (F). As the nation prepared for war in 1917, Navy leaders worried that few men had enlisted. The Navy secretary turned to women the swell the ranks, granting them the ability to join the U.S. Naval Reserve Force. Walsh, of Olyphant, Pennsylvania, become the first of 11,000 women who would eventually sign up, joining as chief yeoman, according to a Navy pamphlet. Her public enlistment is credited with influencing more women — and men — to enter service in the lead up to the United States formally entering World War I on April 6, 1917.

First Asian American female to serve in the Navy and first female gunnery officer, Susan Ahn Cuddy (1915-2015), rank of lieutenant. Los Angeles native Cuddy, a lieutenant in World War II, rose to become the first Asian American naval officer and first female gunnery officer, according to a Department of Defense (DOD) article, a feat made more remarkable given the anti-Asian sentiment of the time. Cuddy attributed her nontraditional path to the influence of her father, Donan, a Korean independence leader who encouraged her to pave her own way. (In the late 1930s, DOD notes, he was imprisoned in Korea for anti-Japanese activities and died in custody.)

After the attack on Pearl Harbor, Cuddy enlisted in the Navy. She overcame rampant racism to become gunnery instructor, gunnery officer and lieutenant. She also served in naval intelligence, using her Korean language skills to decode documents, according to DOD. She continued in civilian life to supervise intelligence analysts and oversee top secret projects in positions for the National Security Agency and DOD. She lived to be 100 years old.

First African American female officers in the Navy, Harriet Ida Pickens, rank of lieutenant (j.g.), and Frances Eliza Wills, rank of ensign. Following a decision in October 1944 by President Franklin Roosevelt to reopen the Navy to African American women, New York City natives Pickens and Wills earned their officer commissions on Dec. 26, 1944, according to the Naval History and Heritage Command.

First African American enlisted female in the Navy, Edna Young, rank of chief yeoman. Sworn in on July 7, 1948, Young is cited as the first female to enlist in the regular Navy.

First Native American graduate of the Naval Academy, Joseph James Clark (1893-1971), rank of admiral. Eventually achieving the Navy’s highest rank, the Pryor, Oklahoma, born son of Cherokee Indian William A. Clark and Lillie Berry Clark became in 1917 the first Native American to graduate from the U.S. Naval Academy in Annapolis, according to the Naval History and Heritage Command.

Search and read citations of all Medal of Honor recipients: https://www.cmohs.org/recipients.

PFC David Foster
Posted 2 mo ago
It seems the Navy has many causes to celebrate today.... Long live the Navy!
(12)
Comment
(0)