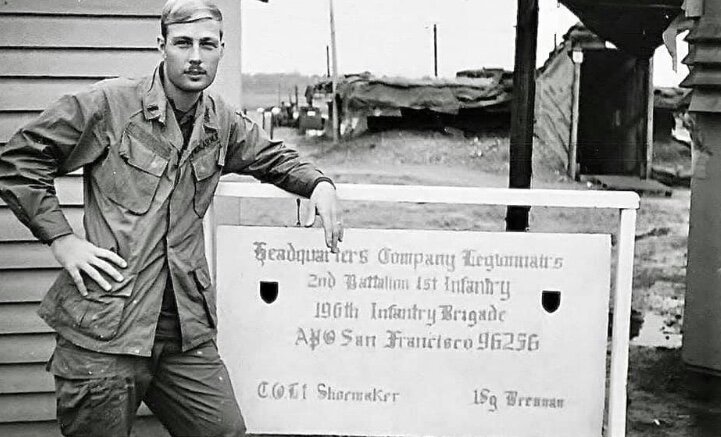 An absolute honor to interview John Shoemaker for this week’s Veterans Spotlight. Born in Fitchburg, MA he attended UMASS and graduated with a BBS in Management before enlisting in the Army in 1968. He would go onto serve his country for (4) years as a Combat Platoon Leader and Company Commander in the 196th Light Infantry Brigade of the “Americal” Division in Chu Lai. He completed his basic training at Fort Dix, NJ, Advanced Infantry Training at Fort Polk, LA and Airborne & Officer Candidate School Training at Fort Benning, GA before going to advanced jungle training in the Panama Canal Zone.

Lt. Shoemaker left for Vietnam with his first-born son only (3) months old. He arrived in Vietnam and immediately went through two weeks of in-country training and was assigned to a Firebase on Hawk Hill then to Hill 251 just west of Chu Lai. His first day on patrol, provided him with a memorable experience. “My commanding office told me ‘you’re just an observing officer’…..we were marching through a rice paddy, I was 5th in line…..radio guy was in front of me….I was mesmerized as I waded through this dark brown, putrid, god-awful-smelling water filled with water buffalo and human excrement and leeches….I thought, I’m not watching Walter Cronkite anymore….then, it seemed like the whole world blew up…..a huge explosion…..the guy in front of the radio man stepped on a booby trap…blew off his feet……almost split the Lieutenant in front of him in two….I was now in charge…..all our guys had zero combat experience…..one of the soldiers came up to me and said, ‘ok Lieutenant, what do we do now?’ I was on patrol for just two hours and thought ‘how am I gonna’ last a year?’ He continued. “My only thought was I had to keep my soldiers alive and kill as many NVA soldiers before they killed me….thought there’s no way in hell I’m getting out of here alive…..was scared every day and I said (expletive) it, I’m taking the battle to the enemy….I was in the jungle 3-4 weeks at a time…..was always afraid of losing a limb or being captured……resigned myself that the latter was never going to happen” he said.

I asked Lt. Shoemaker about the holidays and how it might have affected him. “There were no holidays for me….did have a chance to see Bob Hope….it was a life experience…..got to meet him years later….took a bunch of my guys from Hawk Hill…..had to drive a long ways….all I could think about on the way is to hell with Hope, what happens if we got ambushed? We couldn’t carry guns, only the MP’s escorting us could…..would have been the perfect time” he remembered.

I asked Lt. Shoemaker, the feeling of losing a soldier under your command. He replied with this; “It’s simply devastating….you constantly think ‘what could I have done, what should I have done’? It eats at you….I lost (5) guys…..two gunshot and three from booby traps….I wanted to kill (10) NVA for every one I lost….I was just so pissed….when a soldier is lost, it stays with the family forever….the pain never goes away….nobody knows how they suffer” he recalled. He continued, “I had a soldier that had two parents that were doctors...this kid was in med-school studying to be a doctor….great kid….he enlisted to go to Vietnam because his parents told him he should do something for his country that would have purpose….he took a bullet to one of his major organs in a firefight….he died in shock in the helicopter….an asset of humanity that was tragically lost” he said somberly.

Lt. Shoemaker offered this when I asked him his thoughts on the protesters of the Vietnam War. “I rejected it at the time, because it showed our country in a bad light and divided. It destroyed our country’s morale, unity and patriotism.”

Thoughts on service? “I thought I needed to serve…..my dad was in the Navy in WWII….I was inspired by my dad….being a Combat Platoon Leader in Vietnam proved to be who I am, it changed who I was….and it created who I would be….I would do everything over the exact same way.” He was awarded (3) Bronze Stars, (2) for Valor, the Air Medal, (2) Army Commendation Medals, (1) for Valor and the Purple Heart. Lt. John Shoemaker, thank you for your service to our great country.
Posted in these groups:

MAJ Bob Miyagishima
Posted 7 mo ago
Very well written, you could and should write a book about your wartime experience. I've only known and read one other account of a hero and MOH recipient, Hiroshi Hershey Miyamura. He was captured in the Korean War and was a POW as well. God bless you Lieutenant Shoemaker.
(13)
Comment
(0)

CPL Douglas Chrysler
Posted 7 mo ago
Thanks for sharing this article.
(12)
Comment
(0)
Show More Comments
Read This Next
RallyPoint Home