“I really believe that to be effective as a MCPON, it’s really necessary that whoever is selected in the job have at least three years to work with their CNO,” Stevens said in a phone interview. “That amount if time is truly necessary to establish a close working relationship and be an effective team and accomplish things for our sailors."

Stevens accomplished a lot.He oversaw the continued professionalization of the chief's mess Navy-wide that drove a drop in cases of misconduct. He also expanded the Senior Enlisted Academy and made it mandatory for selection to master chief.
Tablets are now teaching platforms at boot camp and could soon be issued to all sailors. And Navy Secretary Ray Mabus has named DDG-119 for the first MCPON, Delbert D. Black — a honor that Stevens advocated for.

His highest profile and most controversial move came a few months into his tenure, when he "sundowned" chief petty officer induction and mandated tough, professional training instead.

It's the right time to move on, he said.

"I recognize if I stayed any longer that I would be disadvantaging a generation of master chiefs, taking from them the opportunity to compete to be MCPON because they would hit high-year tenure," said Stevens, who is 51.
Wanting to keep his decision to leave low-key, Stevens is announcing his plans to the master chiefs of his leadership mess, who will push it out to the force.

His job has been tough on his family. His wife Theresa has rarely come with him on the many fleet trips that are a part of his job.

"She has given me up to the Navy for four years and she deserves to have her husband back full-time,” he said. “She says it’s like I’ve been been on deployment for these years, but I come home to do my laundry.”

That approval has set in motion the search for the master chief to whom Stevens will pass the ceremonial cutlass that symbolizes the office. The choice falls to the CNO, but Stevens said he's making recommendations about the qualifications to compete for the job.

Stevens said he'll recommend all six current fleet master chief’s automatically be eligible to apply, regardless of their time in the job.

“I’m also going to recommend that all command master chiefs who are currently or have served at least 18 total months in a billet at the three or four-star level also be eligible for consideration,” he said.

This will bring the eligible pool of candidates to somewhere in the neighborhood of 20, he estimated. It will still be up to the master chiefs themselves as to whether they will apply. Setting these prerequisites will prevent more junior master chiefs from being selected, but he believes the top job requires someone familiar with working with staffs.

“It’s critical that whomever is selected be familiar with how staffs work at the highest levels of the Navy,” he said. “It’s something that only experience can bring to even the best command master chief and they need that to be effective in the Navy today.”

The last such "deep select" was Master Chief Petty Officer of the Navy (SW/FMF) Joe Campa, who was picked by then-CNO Adm. Mike Mullenin 2006. Prior to that, he was the command master chief at Joint Task Force Guantanamo Bay, Cuba, a one-star billet.

Stevens said that in thisday and age that step would be tough to make.

“You don’t see anyone brought up from the O-6 level to be CNO, so I don’t think it should be any different for selection to MCPON,” he said. “It’s a very steep learning curve and it was tough enough for me just coming in from the fleet level." 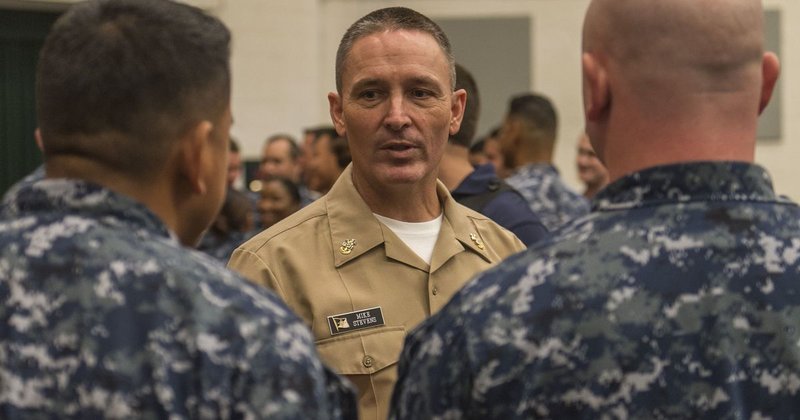 LTC Stephen F.
Posted 4 y ago
Thanks for mentioning and honoring Master Chief of the Navy (AW/NAC) Mike Stevens SFC Joe S. Davis Jr., MSM, DSL. I am glad that he was there to be the Master Chief who "sundowned chief petty officer induction and mandated tough, professional training instead."
(1)
Comment
(0)

PO1 William "Chip" Nagel
Posted 4 y ago
Fair Winds and Following Seas Master Chief. Thanks for all Your Help over the Many Years.
(1)
Comment
(0)

MCPO Jerry Woller
Posted 1 mo ago
One of the worst MCPON's we have ever had. Thanks though for dropping the turd in our punch bowl and making us MCPO's try to sell it to the Fleet. MCPON Stevens was the driving force behind getting rid of Navy Rates and giving everyone a MOS like the rest of the services. Worst decision ever made.
(0)
Comment
(0)
Show More Comments
Read This Next
RallyPoint Home