LCDR Andy Hill
27.6K
17
21
4
4
0
In 1919, the US Congress appropriated funds to convert the collier, Jupiter to the first US carrier, USS Langley. In November 1921, to prevent an arms race after the war, representatives from the United States, the United Kingdom, Japan, France, and Italy began talks in Washington, D.C.

On the basis of decoded diplomatic messages, the United States and Great Britain knew what arms limitations the Japanese would accept in the peace talks following the war, and negotiators bargained accordingly. The Washington Naval Treaty, also known as the Five-Power Treaty, was signed on February 6, 1922.

In treaty, construction was limited on battleships, battle cruisers, and aircraft carriers. Cruisers, destroyers, and submarines were not limited in numbers by the treaty but were limited to 10,000 tons displacement.

Advancements in aircraft and tactics highlighted the 1920s and the carrier became an integral part of fleet operations during the 1920s.

America will celebrate the 100th Anniversary of the Aircraft Carrier. The USS Langley, CV-1, was commissioned on March 20, 1922 and became America's first carrier. A new era for naval aviation began with the arrival of the Langley in San Diego on November 29, 1924. 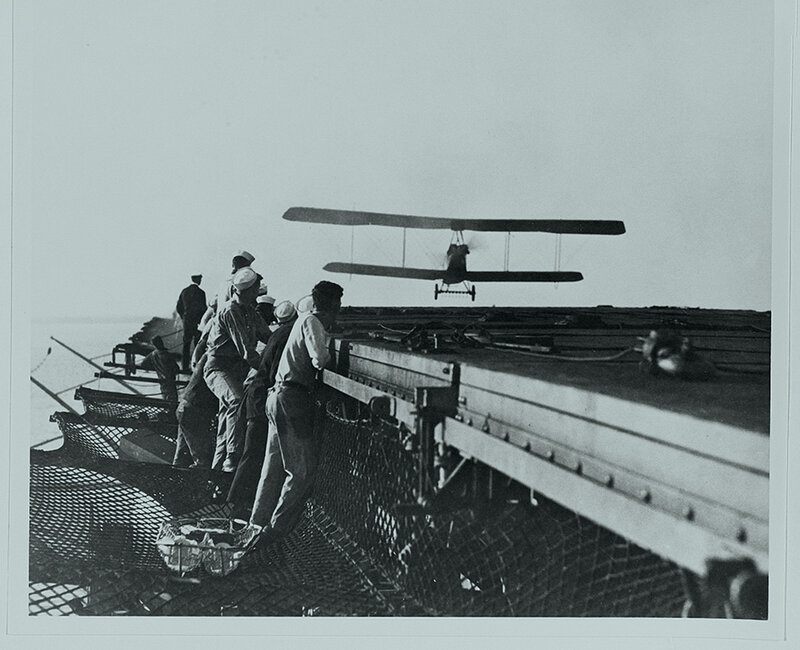 Posted from airandspace.si.edu
Posted in these groups:

MAJ (Join to see)
Posted 7 mo ago
That’s crazy good. I believe we were conceptualizing about planes and their capabilities and roles, but an aircraft carrier born in that era is quite amazing to me.

Here is some military history. When we sunk all Japanese carriers, it meant we would win the sky and the ocean. Then we took land back. I believe the loss of her carriers allowed us to checkmate the Japanese.
(2)
Comment
(0)
show previous comments

LCDR Andy Hill
7 mo
I found a real gem on a website for telling the story about the Pacific war. https://pacificwar.org.au/Introduction.html

LCDR Andy Hill
7 mo
MAJ Ken Landgren. We were not prepared while Japan attacked Malaya, British Borneo, Philippines & the Dutch East Indies. Japan attacks Guam and Wake Island. I think you'll find the story of the Battle of Coral Sea most interesting, the US and AUS engaged the Empire of Japan about a month prior to Midway to stop their invasion at Port Moresby shortly after the Doolittle Raid.
https://pacificwar.org.au/Battle_Coral_Sea.html

Attack on the Philippines, 8 December 1941 On 8 December 1941, as prelude to multiple amphibious landings in the Philippines, the Japanese launched air attacks on U.S. and Filipino bases. Cavite Navy Yard, primary base of the U.S. Asiatic Fleet, was first bombed on 10 December and had been largely destroyed by the time of the evacuation of Manila on 25 December.

Fair Winds and Following Seas to another great lady.
https://www.independent.co.uk/news/world/americas/kitty-hawk-1-cent-scrap-ebay-b1996695.html

LCDR Andy Hill
7 mo
Named for the famed location where two brothers Orville and Wilbur Wright first successful had a the world's first powered flight. At the end of October when the USS Kitty Hawk Veterans Association held a reunion in Nashville there was one thing was on everyone's mind: The ship was going to scrapped despite years of efforts and fundraising to turn the aircraft carrier into a museum. Naval Sea Systems Command spokeswoman Colleen O'Rourke told the a local Newspaper in October that the Kitty Hawk was headed for the scrapyard after years of being held in reserve status at the Inactive Ship Maintenance Facility in Bremerton. This was the Navy's plan all along, ever since the ship was decommissioned in 2009, although it had not yet been officially announced until that point. The former Kitty Hawk sailors felt blindsided by the news.
They had previously believed they would at least get a chance to save the aircraft carrier from the fate of being towed to the scrapyard, which is what happened to the last three inactive aircraft carriers moored in Bremerton.
(1)
Reply
(0)

CWO4 Terrence Clark
7 mo
LCDR Andy Hill
Whole hunk of yard art. For me just a refreshing of petsonal memories concerning her and the Connie - last of the oil fireds.
https://www.navytimes.com/military-honor/black-military-history/2017/02/28/race-riot-at-sea-1972-kitty-hawk-incident-fueled-fleet-wide-unrest/

It was not a good time for the carrier Kitty Hawk as it steamed across the South China Sea toward Vietnam in October 1972. The ship already had been deployed for eight months, and was on track to spend a record number of days at sea with a grueling pace of flight operations to support U.S. troops in Vietnam.

SSG Gregg Mourizen
Edited 7 mo ago
Posted 7 mo ago
Navy Base North Island in San Diego was also known as the Home of Naval Aviation
Charles Lindberg took off from San Diego on the Maiden flight of the Spirit of St Louis. From what is known today as the Midway District.

There is a movie from the 1930's called the 'Flying Docs' commemorating the birth of Naval Aviation, also set on North Island

Not many people know that Navy Base San Diego, originally known as a Destroyer Base, was originally set up to abide by the above Five-Power Treaty. It's original purpose was to decommission and dismantle Destroyers. In the late 1930's, the Shipyards were converted and they were then use to build Destroyers.
(1)
Comment
(0)

LCDR Andy Hill
7 mo
Jack rabbits to jets is a phenomenal account of how American inventors began with Army and Navy, and how Naval Aviation at NAS North Island evolved. https://www.amazon.com/Jackrabbits-Jets-History-North-Island/dp/ [login to see]