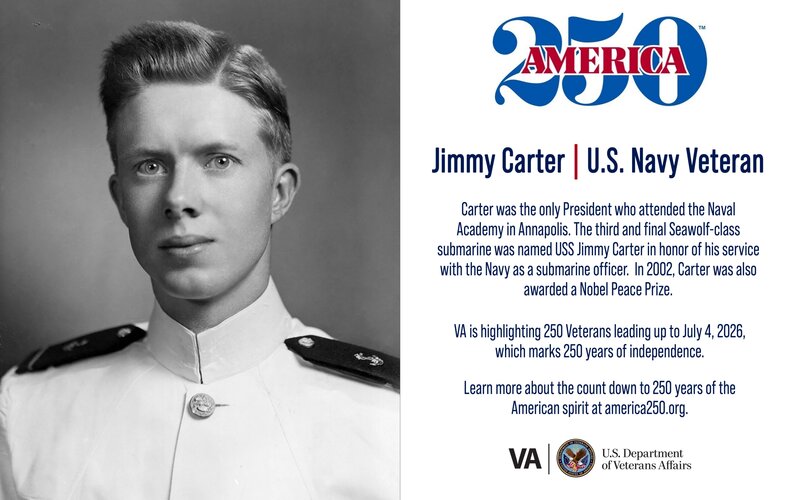 PFC David Foster
Posted 10 mo ago
They don't make them like Jimmy Carter every day. The last I heard, he was 95 and working for Habitat for Humanity.
(1)
Comment
(0)

SPC Lyle Montgomery
10 mo
It's a good thing that they don't make themlike him anymore. He seems like a good human being but was a lousy president but not as bad as Obama and Biden. I lost all respect for him when he pardoned all the Vietnam draft dodgers.
(2)
Reply
(0)

CPO Nate S.
2 mo
SPC Lyle Montgomery - Frankly, as an Independent the very LAST Dem I ever voted for! What hit Carter squarely in the nose was the history he was challenged to fix from the Watergate Debacle and Fords near melt down. The nation needed a NEW face. That face was smashed with the beginnings of OPEC cartel that was too influential causing gas shortages I still remember, which led to the development of the Strategic Petroleum Reserve that was "... started ... in 1975 (just before Carter's presidency) to mitigate future supply disruptions...". He also developed the Camp David Accords! On top of that the IHC was the real dagger to his heart that caused the Reagan revolution.

Like many "INDPENDENTS" I vote for idea. Carter at the time had run out of ideas and Reagan was more closely aligned with much of my thinking at the time. Also, I was not impressed at the time with his choice to pardon "draft dodgers" as I was just entering the USN to serve as my father has severed during Korea for him!

But, one veteran, put it to me this way. What if Lincoln, in his desire to return a broken nation from the hell of an "un-Civil War", had he sought to punish the South. Lincoln saw the need to make the nation whole which is why he urged US Grant to offer Lee generous terms for his troops. Of course, after Lincoln's assassination that went to @#@#$@#!

Frankly, all Carter was attempting to do was, for those who had exercised their 1st Amendment as we both are now, in this "...peaceable assembly..." on RP, was to offer them a way to return home, much had Grant was asked to do. Again, some of those who should have been punished - the most violent and unrepenting of the lot. Perhaps there is a silver lining for those that choose to enter the lion's den of Vietnam and the politic nightmare it evoked. At least, those who dodged were off the battlefield and did not cause situations that could have led to the massacre of US troops because as you suggest they were willing to turn their backs, in much the same ways as many in the current crop in Congress are turn their backs on "We the people.........".

Finally, when the Israelis offered as they did on 04 Jul 1976 during Operation Thunderbolt (https://en.wikipedia.org/wiki/Operation_Entebbe) to carryout a similar raid on behalf of rescuing the US Hostages in almost the same manner, Carter, some historians would not have suffered the "US alone" ill-fated rescue had he used his tactical submariner training much like how H. Norman did when liberating Kuwait way back when (i.e. GWI - 1990s).

We only consider Carter because for many of us he is a recent memory. But when historians look at all of Presidential history they see the "Worst" president in different terms. I agree with some positions in this list (https://www.c-span.org/presidentsurvey2021/?page=overall) while I very much disagree with the placement of others on this list. But Carter is NOT at the bottom as the rhetoric would suggest. Here are some other references to consider:

FYI, I am not saying by sharing these links I agree or disagree with their rankings, I am saying upon closer examination there are some interesting patterns and biases.

All in all, Carter, for a brilliant as he was to get into Hyman Rickover's nuclear power program, he was not wholly prepared to deal with DC and the swamp!

SPC Lyle Montgomery
2 mo
Cpo Nate S I respect ypur opinions on Jimmy Carter, As I said He is a good human being but I volunteered for the draft in 1969 and ended up as an Army grunt in Vietnam where We lost a lot of good men while the protesters and cowardly draft dodgers ran off to Canada. At least 2 from my small hometown fled to Canada. I could have been OK with that while they stayed there but Carter let these cowards come back to the US and that sucked. We lost 3 good men here to that debacle, Vietnam but we served I know that the Vietnam war was an unnecessary culsterfuck but the same can now be said about the gulf war. However when we are called to serve as good citizens, we should respond and not run away and cower in a foreign country. Draft dodgers are cowards and should never be forgiven. At least, that's my opinion.
(0)
Reply
(0)

CPO Nate S.
2 mo
Listen, I had some guys (friends) just a year or two older than me who went, and some did not return, while others (not-friends) "escaped" the draft and lived. I am still angry the older friends died, and those cowards lived. I get it. Yet, I am only making historical references and sharing other perspectives.

War is a debacle, especially when run by politicians with their self-interests leading the way vs supporting troops with honor by helping to make any conflicts short and allowing out men and women to come home with HONOR. Carter was handed a bag of post-Watergate and post-POTUS Ford crap that I am not sure those around him helped him manage as well as he could have, especially in a crisis.

This said if ONLY Biden and Carter were the only two standing from which to choose as POTUS, I would rather have a NAVY nuclear-power trained submariner than someone who is China's stooge. Frankly, my 21-yo grandson who head is crewed on straight is who I advocated if he were 35-yo at out nations time of need. Hec, I'd even vote for you!!!

Yes, Carter made mistakes but those mistakes, as distasteful as they are, are no match to the crap that Biden and his dishonorable bunch are pulling!!!

If China really tests us, I am genuinely concerned Biden, nor his National Security Team will have the guts to defend those who will be on the front line. Who knows, they might have to call you guys like and me back to duty (LoL) if things get too nuts!

BTW, thank you for your "professional/mature" response. Some on RP would rather rant and make incoherent arguments that make no sense. So, I am pleased in my coms with you! Again, thank you! Who knows if I get your way I buy you a beer and a good stake and we'll chat!
(0)
Reply
(0)
Read This Next
RallyPoint Home