Baltic sea otters, take cover. On Saturday, the B-52 long-range bomber will be dropping some inert mines over the water to test its targeting skills during BALTOPS 2016.

The Cold War-era bomber, like a smartphone, keeps improving with upgrades, new software and weapons.That’s why mission planners and commanders say the B-52 brings more to the table during exercises BALTOPS and Saber Strike, ongoing in the Baltics, Finland, Sweden, Poland and Germany these next few weeks.

Dropping mines is something the B-52 is capable of “but we don’t get a chance to do too often,” said Col. Kieran Denehan, 5th Expeditionary Operations Group commander.

The job will be to hit their sea targets, or the “splash points,” evaluated by the U.S. Navy, to see just how well the bomber can hit up a mine field if it were laden with explosives.

The same will be done during U.S. Army Europe-led Saber Strike, working with joint terminal attack controllers on the ground.
For the U.S. and allied aircrews, the B-52 is the perfect aircraft for these exercises “because we do so much. If it’s air to ground, the B-52 can employ that weaponry, from unguided ... up to 2,000-pound bombs, to laser-guided munitions to GPS-guided munitions like JDAMs,” Maginness told Air Force Times on Thursday.

“It’s kind of funny to compare...an aircraft built in the 50s to a smartphone, but it was really a smartphone before we knew what a smartphone was,” he said. “It is in the sense that if you wanted to have a different capability, you download the app for it."

Not to mention, the heavy bomber is using its targeting pods and sensors, getting the weapon right on the bull’s-eye.

“We’re using targeting pods on almost every sortie profile we fly, and we've [used] limited electronic countermeasure equipment allowing us to look at the defensive systems on the B-52,” Maginness said.
Maginness and Denehan said that the three B-52s launch at the same time for both land and sea operations. The B-52s roughly fly two sorties — about eight hours of flight time — a day.

This is the third year the aircraft has been invited for exercises.

"It's kind of like throwing a party," Denehan said. "Months in advance, you know who you're going to invite, what you're going to be serving ... so the infrastructure is there, who your guests are, where they're coming from."
But lead planners still use an aerial tasking order cycle to plan a flight 48 to 72 hours in advance, tasking various aircraft from B-52s to F-16 fighter jets to play their part in specific drills.

Airmen have been working with liaison officers from dozens of countries to coordinate the ATO, familiarizing themselves with the tiniest of details, including other pilots' call signs, to best execute their mission plan, said Capt. Andrew Paulsen, 5th Expeditionary Operations Group mission planner. Not everyone is synced up on the same time zone or same language, making coordination incredibly complex. 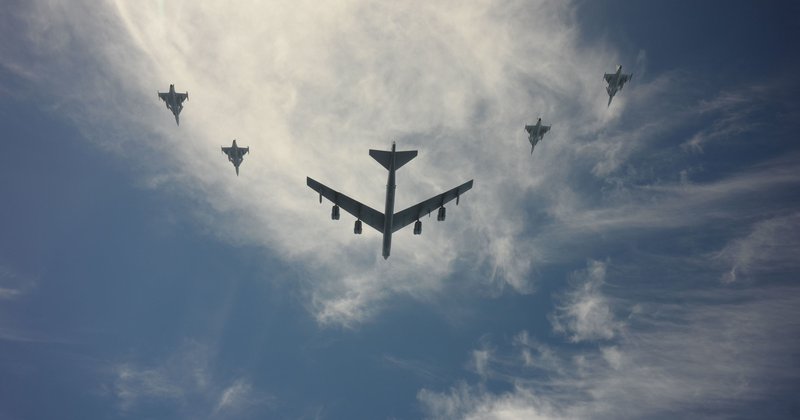 LTC Stephen F.
Posted >1 y ago
That is interesting news SFC (Join to see) that B-52 long-range bomber will be dropping some inert mines over the water to test its targeting skills during BALTOPS 2016.
This reminds me of Dr. Strangelove for many reasons.
I am glad that the B-52 which is a venerable and robust airframe is continuing to be used in strategic missions.
(1)
Comment
(0)

SFC (Join to see)
>1 y
LTC Stephen F. the B-52 is unstoppable and a force to be reckoned with in strategic missions world-wide IMO.
(1)
Reply
(0)

PO1 William "Chip" Nagel
Posted >1 y ago
I would love to see some Video of those 500 lbs Imitation Mines hitting the water.
(0)
Comment
(0)
Read This Next
RallyPoint Home