Bleeding France to Death: Battle of Verdun in WWI

SGT (Join to see)
478
32
5
13
13
0
On February 21, 1916, during World War I, the Battle of Verdun began with a German offensive which led to an estimated 1 million casualties and became the longest battle of the entire war. From the article:

"The Battle of Verdun was fought during World War I (1914-1918) and lasted from February 21, 1916 until December 18, 1916. The longest and largest battle fought on the Western Front during the conflict, Verdun saw German forces attempt to gain the high ground around the city while drawing the French reserves into a battle of annihilation. Striking on February 21, the Germans made early gains until increasing French resistance and the arrival of reinforcements turned the battle into a grinding, bloody affair.

Fighting continued through the summer and saw the French commence counterattacks in August. This was followed by a major counteroffensive on October which ultimately reclaimed much of the ground lost earlier in the year to the Germans. Ending in December, the Battle of Verdun soon became an iconic symbol of French resolve to defend their country.

Background
By 1915, the Western Front had become a stalemate as both sides engaged in trench warfare. Unable to achieve a decisive breakthrough, offensives simply resulted in heavy casualties with little gain. Seeking to shatter the Anglo-French lines, the German Chief of Staff Erich von Falkenhayn began planning a massive assault on the French city of Verdun. A fortress town on the Meuse River, Verdun protected the plains of Champagne and the approaches to Paris. Surrounded by rings of forts and batteries, Verdun's defenses had been weakened in 1915, as artillery was shifted to other sections of the line (Map).

Despite its reputation as a fortress, Verdun was selected as it was located in a salient in German lines and could only be supplied by a single road, the Voie Sacrée, from a railhead located at Bar-le-Duc. Conversely, the Germans would be able to attack the city from three sides while enjoying a much stronger logistical network. With these advantages in hand, von Falkenhayn believed that Verdun would only be able to hold out for a few weeks. Shifting forces to the Verdun area, the Germans planned to launch the offensive on February 12, 1916 (Map).

The Late Offensive
Due to poor weather, the attack was postponed until February 21. This delay, coupled with accurate intelligence reports, allowed the French to shift two divisions of the XXXth Corps to the Verdun area prior to the German assault. At 7:15 AM on February 21, the Germans commenced a ten-hour bombardment of the French lines around the city. Attacking with three army corps, the Germans moved forward utilizing storm troopers and flamethrowers. Staggered by the weight of the German attack, the French were forced to fall back three miles on the first day of fighting.

On the 24th, troops of XXX Corps were compelled to abandon their second line of defense but were buoyed by the arrival of the French XX Corps. That night the decision was made to shift General Philippe Petain's Second Army to the Verdun sector. Bad news for the French continued the next day as Fort Douaumont, northeast of the city, was lost to German troops. Taking command at Verdun, Petain reinforced the city's fortifications and laid out new defensive lines. On the final day of the month, French resistance near the village of Douaumont slowed the enemy advance, allowing the city's garrison to be reinforced.

Changing Strategies
Pushing forward, the Germans began to lose the protection of their own artillery, while coming under fire from French guns on the west bank of the Meuse. Pounding German columns, French artillery badly bled the Germans at Douaumont and ultimately forced them to abandon the frontal assault on Verdun. Changing strategies, the Germans began assaults on the flanks of the city in March. On the west bank of the Meuse, their advance focused on the hills of Le Mort Homme and Cote (Hill) 304. In a series of brutal battles, they succeeded in capturing both. This accomplished, they began assaults east of the city.

Focusing their attention on Fort Vaux, the Germans shelled the French fortification around the clock. Storming forward, German troops captured the fort's superstructure, but a savage battle continued in its underground tunnels until early June. As the fighting raged, Petain was promoted to lead the Centre Army Group on May 1, while General Robert Nivelle was given command of the front at Verdun. Having secured Fort Vaux, the Germans pushed southwest against Fort Souville. On June 22, they shelled the area with poison diphosgene gas shells before launching a massive assault the next day." 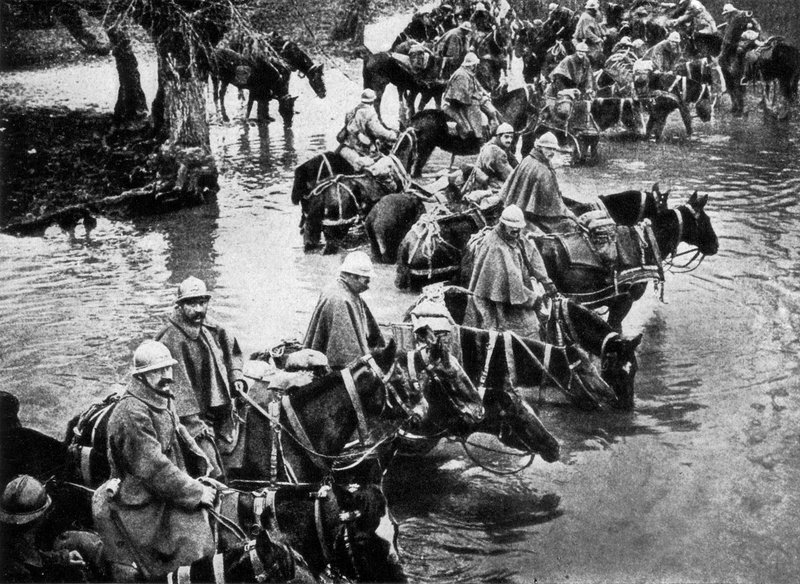 Bleeding France to Death: Battle of Verdun in WWI