PO1 William "Chip" Nagel
1.21K
46
21
10
10
0
China has warned the UK's Carrier Strike Group, led by the aircraft carrier HMS Queen Elizabeth not to carry out any "improper acts" as it enters the contested South China Sea.

'The People's Liberation Army Navy is at a high state of combat readiness' says the pro-government Global Times, seen as a mouthpiece for the ruling Chinese Communist Party (CCP).

China has been closely monitoring the progress eastward of the Carrier Strike Group, which is currently sailing through the South China Sea en route to Japan, while accusing Britain of "still living in its colonial days".

The Royal Navy has been carrying out exercises with the Singaporean navy and Britain's Defence Secretary Ben Wallace has made no secret of the intention to conduct a so-called "Freedom of Navigation" exercise through the South China Sea.

Contrary to a 2016 international court ruling, China claims much of that sea as its own and has been busy building artificial reefs and runways, some of them close to the territorial waters of neighbouring states.

Both US and Royal Navy warships have recently challenged China's claims to sovereignty in the South China Sea by purposely sailing through it. 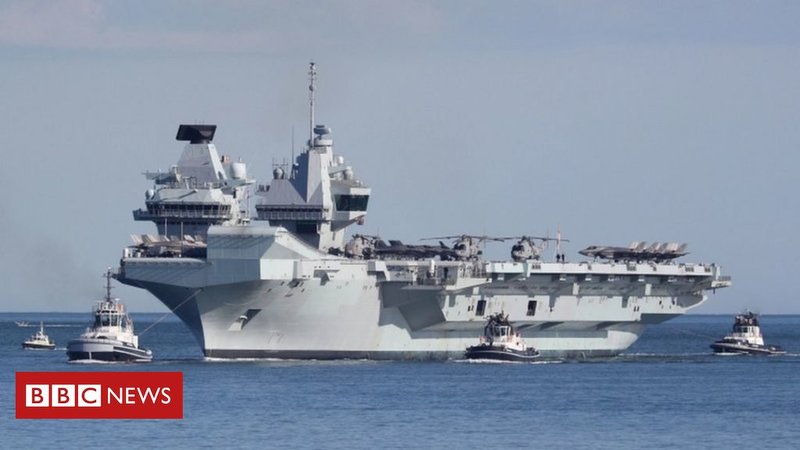 SPC Kelley McMahan
1 y
Begging the Colonels pardon but I know a slew of Korean war vets that would adamantly disagree with you Sir.
(1)
Reply
(0)

1stSgt Edward Jackson
1 y
SPC Kelley McMahan - During the Korean War, China did not send out their Navy to challenge the USN or the RN.
Massive waves of ChiComm troops screaming and running down upon US and UN troops is one thing. But these waves of troops are not going to charge the RN CVF, or her task force.
The ChiComms are bluffing here in the 21st Century. If they did attack the RN CVF Task Force, they know they would face the full combat strength of the RN, USN, RAN, ROKN, JMSDF, and Deutsche Marine at a minimum.
Allied SSNs and SSKs will play hell with the PLAN surface fleet and their SSKs, SSNs, and SSBNs. The PLAAF cannot compete with the USAF, RN, RAAF, and JASDF.
China does not have enough nukes to go nuclear. They have about 300-350 total warheads. The ChiComms will order the DPRK to join them. But I think Putin and the Russian Forces will sit this one out.
(1)
Reply
(0)

LTC Greg Henning
1 y
SPC Kelley McMahan - Understand the Korean War comment and China took huge losses. Modern Warfare is not 1950s. There is too much to lose going to war for China today we are their number one trading partner. Tough talk is part of this culture.
(1)
Reply
(0)

SPC Kelley McMahan
1 y
Fair enough. But much like the Japanese they tend to be more farsighted when it comes to planning than our Government. I they take von Clausewitz better to heart than our political leadership does. That reference being "Diplomacy is warfare by other means." The point in their favor is the 100 year plan. Our leaders are not noted for that kind of patience, theirs are.
(1)
Reply
(0)

LTC (Join to see)
Posted 1 y ago
The UK has every right to be there in those international waters. This area of the Pacific has been a trouble spot as China has built their man-made islands near the Spratly Islands. Nice share PO1 William "Chip" Nagel ...
(3)
Comment
(0)

PO1 William "Chip" Nagel
1 y
LTC (Join to see) I Rather Enjoyed Cruising thru the South China Sea on USS Arkansas CGN-41 during Fiery Vigil/Desert Storm/Southern Watch in 91 and Desert Strike in 96.
(2)
Reply
(0)

LTC (Join to see)
1 y
Haven't been to that part of the Pacific. Of the many places I'd like to go is to Australia, Japan & Saipan (Commonwealth of the Northern Marianas - CNMI). The furthest west I've been was when I lived in Hawaii, on Oahu.
(1)
Reply
(0)
Show More Comments
Read This Next
RallyPoint Home