Nelson was charged with second-degree murder in 2020 in connection with the death of Jesse Sarey, a 26-year-old man Nelson shot outside of a grocery store in 2019.

The 38 photos released on Wednesday include pictures capturing tattoos on Nelson’s hands: “JUDGED BY XII” on the right hand. “CARRIED BY VIII” on the left. That’s shorthand for an old policing proverb: “I’d rather be judged by 12” jurors than “carried by six” — or sometimes eight — pallbearers.

The pictures also show numerous other tattoos covering Nelson’s arms, back, and feet, which contain images of skulls, wolves, and the grim reaper, among others. 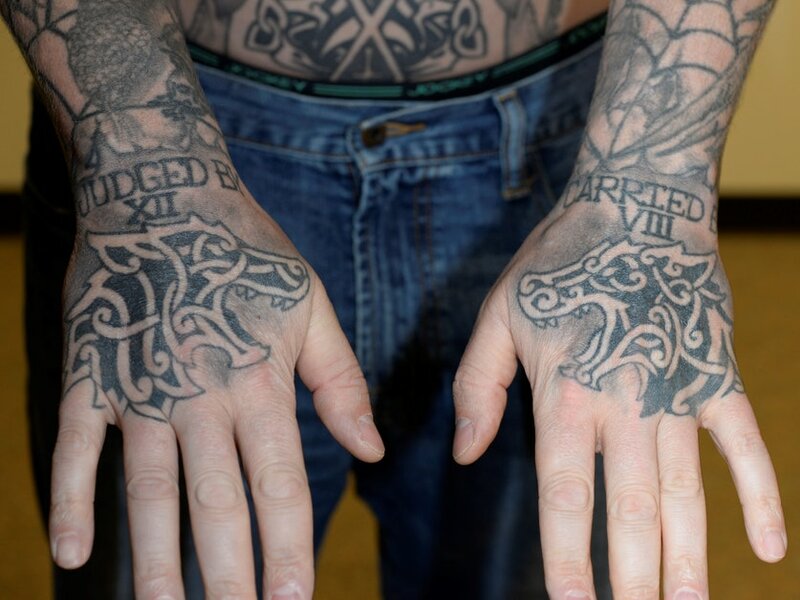 Posted from kuow.org
Posted in these groups:

SFC (Join to see)
Posted 2 mo ago
PO1 William "Chip" Nagel good morning, thank you for the solid read/share of the most informational good buddy.
(3)
Comment
(0)

SGT (Join to see)
Posted 2 mo ago
PO1 William "Chip" Nagel
..."Additionally, Nelson faces a first-degree assault charge, also in connection with the May 2019 shooting death of Jesse Sarey, whom he shot twice – once fatally in the stomach and again in the forehead – after responding to a call saying Sarey was behaving erratically at a Walgreens.

Jury selection for Nelson’s trial, which has been continued multiple times, is slated to begin in November 2022. The trial is currently expected to start in January 2023, according to the King County Prosecutor's Office.

“The continuance is really hard,” Simons said. “The piece that makes it the most difficult is our family, we're trying to move on with our lives, we're trying to heal. And it prolongs that healing process.”

Simons said she’s attended every hearing related to the case over the last 18 months.

"I know that healing is going to be a lifetime thing, but this just keeps reopening it all the time,” she said.

Judge Nicole Gaines Phelps granted the state’s motion for photographs of Nelson’s tattoos, but has not ruled on whether the photos will be admissible as evidence during the trial."
(3)
Comment
(0)

PO1 Jeff Chandler
Posted 2 mo ago
Just wait. Washington’s “ban the box” will make it even worse.
(0)
Comment
(0)
Read This Next
RallyPoint Home