SGT (Join to see)
3.61K
16
3
8
8
0
On September 12, 1919, Adolf Hitler joined the obscure German Worker's Party as its seventh member, agreeing not with worker's rights, but with its German Nationalism and antisemitism. From the article:

"Nazi Party
Under the leadership of Adolf Hitler (1889-1945), the National Socialist German Workers’ Party, or Nazi Party, grew into a mass movement and ruled Germany through totalitarian means from 1933 to 1945. Founded in 1919 as the German Workers’ Party, the group promoted German pride and anti-Semitism, and expressed dissatisfaction with the terms of the Treaty of Versailles, the 1919 peace settlement that ended World War I (1914-1918) and required Germany to make numerous concessions and reparations. Hitler joined the party the year it was founded and became its leader in 1921. In 1933, he became chancellor of Germany and his Nazi government soon assumed dictatorial powers. After Germany’s defeat in World War II (1939-45), the Nazi Party was outlawed and many of its top officials were convicted of war crimes related to the murder of some 6 million European Jews during the Nazis’ reign.

Nazi Party Origins
In 1919, army veteran Adolf Hitler, frustrated by Germany’s defeat in World War, which had left the nation economically depressed and politically unstable, joined a fledgling political organization called the German Workers’ Party. Founded earlier that same year by a small group of men including locksmith Anton Drexler (1884-1942) and journalist Karl Harrer (1890-1926), the party promoted German nationalism and anti-Semitism, and felt that the Treaty of Versailles, the peace settlement that ended the war, was extremely unjust to Germany by burdening it with reparations it could never pay. Hitler soon emerged as a charismatic public speaker and began attracting new members with speeches blaming Jews and Marxists for Germany’s problems and espousing extreme nationalism and the concept of an Aryan “master race.” In July 1921, he assumed leadership of the organization, which by then had been renamed the Nationalist Socialist German Workers’ (Nazi) Party.

Through the 1920s, Hitler gave speech after speech in which he stated that unemployment, rampant inflation, hunger and economic stagnation in postwar Germany would continue until there was a total revolution in German life. Most problems could be solved, he explained, if communists and Jews were driven from the nation. His fiery speeches swelled the ranks of the Nazi Party, especially among young, economically disadvantaged Germans.

In 1923, Hitler and his followers staged the Beer Hall Putsch in Munich, a failed takeover of the government in Bavaria, a state in southern Germany. Hitler had hoped that the “putsch,” or coup d’etat, would spark a larger revolution against the national government. In the aftermath of the Beer Hall Putsch, Hitler was convicted of treason and sentenced to five years in prison, but spent less than a year behind bars (during which time he dictated the first volume of “Mein Kampf,” or “My Struggle,” his political autobiography). The publicity surrounding the Beer Hall Putsch and Hitler’s subsequent trial turned him into a national figure. After his release from prison, he set about rebuilding the Nazi Party and attempting to gain power through the election process.

Hitler and the Nazis Come to Power: 1933
In 1929, Germany entered a period of severe economic depression and widespread unemployment. The Nazis capitalized on the situation by criticizing the ruling government and began to win elections. In the July 1932 elections, they captured 230 out of 608 seats in the “Reichstag,” or German parliament. In January 1933, Hitler was appointed German chancellor and his Nazi government soon came to control every aspect of German life.

Under Nazi rule, all other political parties were banned. In 1933, the Nazis opened their first concentration camp, in Dachau, Germany, to house political prisoners. Dachau evolved into a death camp where countless thousands of Jews died from malnutrition, disease and overwork or were executed. In addition to Jews, the camp’s prisoners included members of other groups Hitler considered unfit for the new Germany, including artists, intellectuals, Gypsies, the physically and mentally handicapped and homosexuals.

Militant Foreign Policy: 1933-39
Once Hitler gained control of the government, he directed Nazi Germany’s foreign policy toward undoing the Treaty of Versailles and restoring Germany’s standing in the world. He railed against the treaty’s redrawn map of Europe and argued it denied Germany, Europe’s most populous state, “living space” for its growing population. Although the Treaty of Versailles was explicitly based on the principle of the self-determination of peoples, he pointed out that it had separated Germans from Germans by creating such new postwar states as Austria and Czechoslovakia, where many Germans lived.

From the mid- to late 1930s, Hitler undermined the postwar international order step by step. He withdrew Germany from the League of Nations in 1933, rebuilt German armed forces beyond what was permitted by the Treaty of Versailles, reoccupied the German Rhineland in 1936, annexed Austria in 1938 and invaded Czechoslovakia in 1939. When Nazi Germany moved toward Poland, Great Britain and France countered further aggression by guaranteeing Polish security. Nevertheless, Germany invaded Poland on September 1, 1939, and Great Britain and France declared war on Germany. Six years of Nazi Party foreign policy had ignited World War II.

Fight to Dominate Europe: 1939-45
After conquering Poland, Hitler focused on defeating Britain and France. As the war expanded, the Nazi Party formed alliances with Japan and Italy in the Tripartite Pact of 1940, and honored its 1939 Nazi-Soviet Nonaggression Pact with the Soviet Union until 1941, when Germany launched a massive blitzkrieg invasion of the Soviet Union. In the brutal fighting that followed, Nazi troops tried to realize the long-held goal of crushing the world’s major communist power. After the United States entered the war in 1941, Germany found itself fighting in North Africa, Italy, France, the Balkans and in a counterattacking Soviet Union. At the beginning of the war, Hitler and his Nazi Party were fighting to dominate Europe; five years later they were fighting to exist.

Systematic Murder of European Jews
When Hitler and the Nazis came to power in 1933, they instituted a series of measures aimed at persecuting Germany’s Jewish citizens. By late 1938, Jews were banned from most public places in Germany. During the war, the Nazis’ anti-Jewish campaigns increased in scale and ferocity. In the invasion and occupation of Poland, German troops shot thousands of Polish Jews, confined many to ghettoes where they starved to death and began sending others to death camps in various parts of Poland, where they were either killed immediately or forced into slave labor. In 1941, when Germany invaded the Soviet Union, Nazi death squads machine-gunned tens of thousands of Jews in the western regions of Soviet Russia.

In early 1942, at the Wannsee Conference near Berlin, the Nazi Party decided on the last phase of what it called the “Final Solution” of the “Jewish problem” and spelled out plans for the systematic murder of all European Jews. In 1942 and 1943, Jews in the western occupied countries including France and Belgium were deported by the thousands to the death camps mushrooming across Europe. In Poland, huge death camps such as Auschwitz began operating with ruthless efficiency. The murder of Jews in German-occupied lands stopped only in last months of the war, as the German armies were retreating toward Berlin. By the time Hitler committed suicide in April 1945, some 6 million Jews had died.

Denazification
After the war, the Allies occupied Germany, outlawed the Nazi Party and worked to purge its influence from every aspect of German life. The party’s swastika flag quickly became a symbol of evil in modern postwar culture. Although Hitler killed himself before he could be brought to justice, a number of Nazi officials were convicted of war crimes in the Nuremberg trials, which took place in Nuremberg, Germany, from 1945 to 1949." 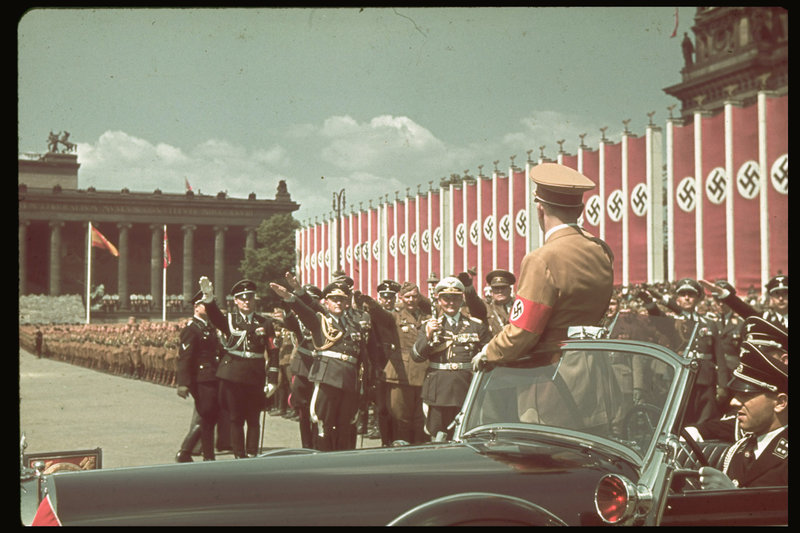 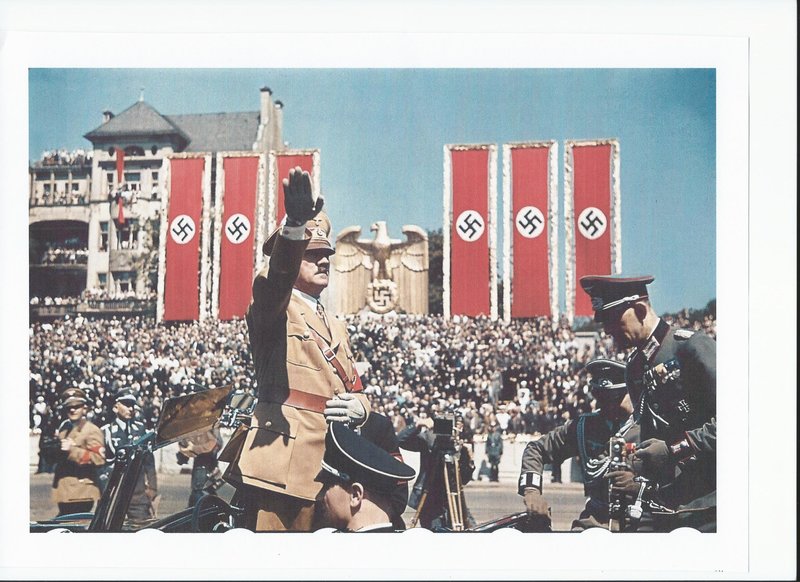 Informative article on the National Socialist German Workers' Party also known as the Nazi Party.
Early party member Adolf Hitler's rise to become the Fuhrer of the Nazi Party which eventually
started World War II causing the deaths of millions of people in Europe. A history so horrible it
is difficult to imagine the death and destruction for those of us who were not there to witness
the human tragedy.
(3)
Comment
(0)