LTC Stephen F.
2.79K
35
11
10
10
0
North Korea leader does his best to be defiant and yet his attempts at ICBM launches seem to be dismal failures.
Based on the image, he does not know how to render a hand salute either :-)
I hope that soon Kim Jong Un will be driven from his high perch - either voluntarily or by open revolt. The latter would take tremendous courage by the people of the hermit kingdom.
Image: North Korea's leader Kim Jong Un watches a military drill marking the 85th anniversary of the establishment of the Korean People's Army (KPA) in this handout photo by North Korea's Korean Central News Agency (KCNA) made available on April 26, 2017. KCNA/Handout via REUTERS
"North Korea Test-Fires Ballistic Missile In Defiance Of World Pressure
April 28, 2017

By Jack Kim and Michelle Nichols

U.S. and South Korean officials said the test appeared to have failed, in what would be a fourth successive unsuccessful missile test since March.

U.S. officials, speaking on condition of anonymity, said the missile was probably a medium-range missile known as a KN-17 and appears to have broken up within minutes of taking off.

Tension had spiked on the Korean peninsula over concerns the North may conduct the test-launch of a long-range missile or its sixth nuclear test around the time of the April 15 anniversary of its state founder’s birth or the day marking the founding of its military earlier this week.

The timing of the latest launch suggests it was calculated to send a certain message as Pyongyang remains under intense attention of world powers, said Kim Dong-yub, an expert at Kyungnam University’s Institute of Far Eastern Studies in Seoul.

“It was planned at a complicated timing around the end of the South Korea-U.S. joint military drills, the United States talking about military options and the announcement of North Korea policies and the Security Council meeting,” Kim said.

South Korean and U.S. forces have been conducting annual military drills since the start of March that conclude at the end of April.

In a show of force, the United States is sending the USS Carl Vinson aircraft carrier group to waters off the Korean peninsula, where it will join the USS Michigan, a nuclear submarine that docked in South Korea on Tuesday.

U.S. President Donald Trump told Reuters in an interview on Thursday a “major, major conflict” with North Korea was possible over its nuclear and ballistic missile programs.

But both China and Russia rebuked Washington’s threat of military force at a meeting of the U.N. Security Council on the matter on Friday.

Chinese Foreign Minister Wang Yi told the 15-member council it was not only up to China to solve the North Korean problem.

“The key to solving the nuclear issue on the peninsula does not lie in the hands of the Chinese side,” Wang told the council in blunt remarks that Tillerson later rebuffed.

“It could have happened today exactly because we had the meeting,” Italian U.N. Ambassador Sebastiano Cardi, chair of the Security Council’s North Korean sanctions committee, told reporters when hearing of the test. “It’s illegal, it should not be done, it’s another provocative action by North Korea.” 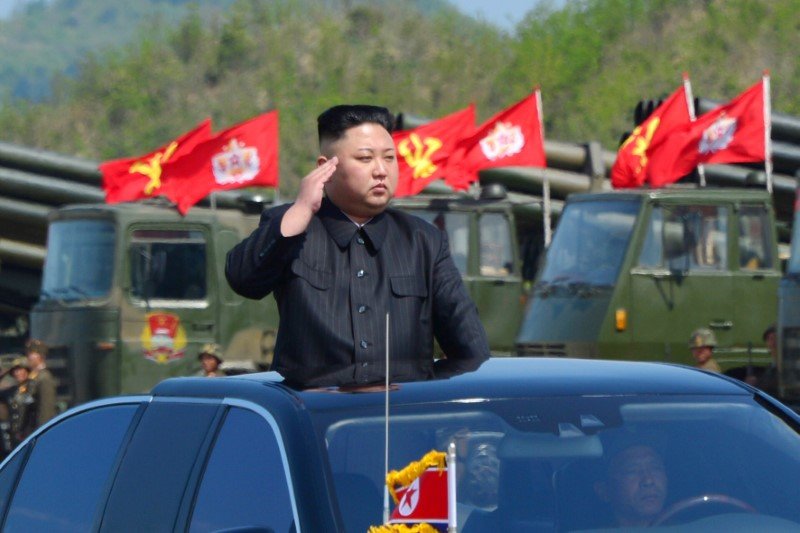 SFC (Join to see)
Edited >1 y ago
Posted >1 y ago
LTC Stephen F. he( Kim Jong In) is playing with fire and will be burnt if he does not stop the ICBM launches. My goodness is the elevator going up in his head???
(6)
Comment
(0)

1stSgt Eugene Harless
>1 y
I think the elevator went all the way up... then his head got on and it dropped back to his ass, because thars where his head is.
(0)
Reply
(0)

SSG Steven Mangus
Posted >1 y ago
Every time I see him, he reminds me of an unsuccessful abortion..
(4)
Comment
(0)

SSG Edward Tilton
Posted >1 y ago
For those who remember, we are in Korea as part of UN Forces. Under the cease fire terms no new systems could be introduced by either side
(3)
Comment
(0)
Show More Comments
Read This Next
RallyPoint Home