PO1 William "Chip" Nagel
1.26K
25
17
4
4
0
The police in Martinez, Calif., said on Sunday that they were seeking two white people who were seen vandalizing a Black Lives Matter mural less than an hour after it was painted in front of a local courthouse on Saturday.
“The community spent a considerable amount of time putting the mural together only to have it painted over in a hateful and senseless manner,” Chief Manjit Sappal of the Martinez Police Department said in a statement. “The city of Martinez values tolerance, and the damage to the mural was divisive and hurtful.”
Videos posted on social media show a white woman using a roller with black paint to cover the letters B and L in “Black Lives Matter,” while a white man records onlookers yelling for them to stop.
The mural, in yellow paint in the middle of a city street, spelled out “Black Lives Matter” in capital letters. 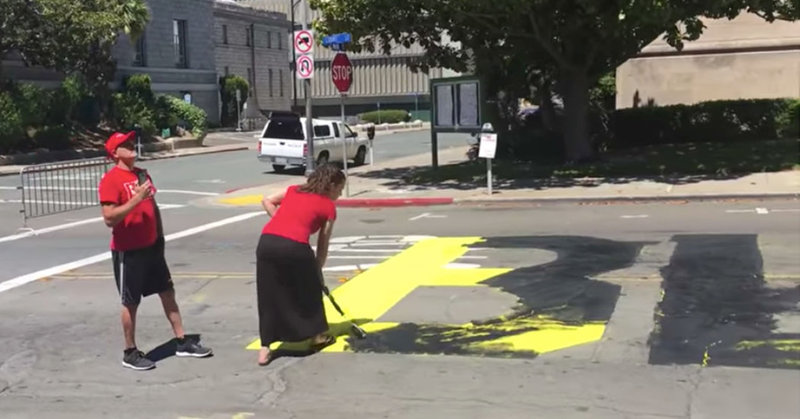 SFC (Join to see)
2 y
SSG (Join to see) - I haven't learned anything from a statue - most of them I've seen don't even have any plaques on them. There are a bunch of statues in the National Mall with zero explanation as to what they are.

I'm sorry that you couldn't take the time to learn history from books or other media and have to learn things from random statues. However, Confederate statues have NO PLACE in America. None. They literally were put up to intimidate people of color. That's their sole purpose.

SSG (Join to see)
2 y
SFC (Join to see) - Here is the problem. You seem to not understand how the 1st amendment works. You want your ideas to stand but not those opposed to them. Something does not need a tag or plaque on it to inspire learning. If a statue does not have a tag on it there is a thing called a "cell phone" that allows one to access the internet and ask a question about the history of the statue. If you have not learned from a statue or piece of art I'm sorry for you.
The Confederate states attempted to succeed due to their believe that States Rights were paramount. A secondary outcome of their loosing was that slavery was finally outlawed . With the assassination of Abraham Lincoln the Democrat party was able circumvent his plans for reuniting the Southern States. The Democrat Party continued to try to hamstring Black citizens with Jim Crow and organizations like the KKK to keep blacks in line and when that did not work the Democrats KKK members gathered in the night and burned crosses and lynched Black men for nothing but their perceived bruised pride.
Your wanting to get ride of painful history is revisionist history. Abraham Lincolns own papers at his Presidential Library discusses the points of Succession. Those Statues do not intimidate me. They remind me to not let men and women like them back into power. You want to get rid of everything bad about the Civil War lets start with the Democrat Party then.
(1)
Reply
(0)

SSG (Join to see)
2 y
MSG Tom Earley - Tom in their minds all statues are bad. They don't bother to see what they are pulling down they just attack anything that "Might" offend them. Several Statues were moved to Battlefields due to petitions but that was not "Good Enough" because they still existed
(1)
Reply
(0)

No statue is safe!

TSgt Jack Oberholtzer
Posted 2 y ago
From the article - Justin Gomez, a local resident who got permission from the city to paint the mural, said of the vandalism on Sunday: “I’m not so surprised that it happened. I’m surprised at how bold they chose to be.” Lol, really?
(3)
Comment
(0)

SFC (Join to see)
Posted 2 y ago
I watched this on Instagram. Those two are ignorant as hell. I hope they get fined or something. The person who painted that mural got permission from the city.

I mean - what do people like that always say? "If you don't like it, don't look at it." Or how about "if you don't like the mural for Black Lives Matter, why don't you just leave?" They tell people if they don't like something to just "gtfo" of America. Well...
(2)
Comment
(0)
show previous comments

SSG (Join to see)
2 y
I watched those Rioters tear Historical monuments. You and Joy want to attack and name call anyone you don't agree with. Well you can put on your "Brown Shirts"
(1)
Reply
(0)

SFC (Join to see)
2 y
SSG (Join to see) - LOL what the f* ever dude. I never said a mural of George Washington offends me. I haven't seen anyone say that. But ok.

No YOU all can't have it both ways - people like you can't say "if you don't like America get the f* out" and then go deface murals and property.

Confederate statues have NO PLACE in America. None. They literally memorialize traitors.
(1)
Reply
(0)

SSG (Join to see)
2 y
SFC (Join to see) - I did not say it Offended you i used it as an example, because it does offend people like you. That's why SF covered one at a school named after George Washington. You just need your "Safe Space" You can not decry the painting over of a street but allow the vandalism of monuments it does not work that way in the real world.
You seem to be under the impression that I agree with the reason the statues may or may not have been placed there. But the 1st amendment protects them being there and I protect the 1st Amendment. Its about the Rule of Law which liberals in America seem to have forgotten. Like Defund the Police but they are the first to call the police when confronted with opposing ideas. Were the police called? Oh BLM does not like police. Was a Crime Committed? Or were someones feeling hurt. I give three shits if I hurt someones feelings.
(1)
Reply
(0)

SSG (Join to see)
2 y
This is Liberal Mind Set - Attack 120 year ole Statue of Elk. Elk Must have been "Rasist" somehow. Attack Little Mermaid, it's "Rasist" Ulysses S. Grant. He was a Civil War General...Must be "Rasist"
(1)
Reply
(0)
Read This Next
RallyPoint Home