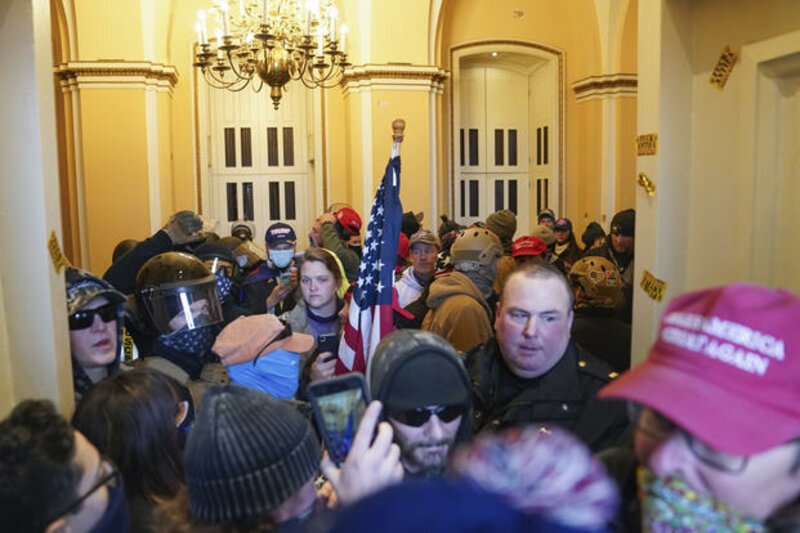 SFC (Join to see)
Posted 4 mo ago
In my opinion the indictments are hogwash and will eventually be dismissed. They have no basis in fact when properly evaluated.

I never knew our military had an extremism problem. Be definition the type of people who choose to run toward the enemy in live or die situations will always be our strongest people, mentally tough, who will be extreme in one way or another. Thank God for that. :)
(2)
Comment
(0)
show previous comments

MAJ James Woods
4 mo
SFC (Join to see) I'll say it again. We have in both the military and government individuals who believe in the American Creed, our Democracy, our Republic, and are willing to fight an enemy; meanwhile have a personal motivation that aligns with radical extremist ideology whom believe those freedoms only belong to a few based on one's religion, race, or ethnicity. The Civil War had US military personnel that chose their radical extremist ideology over loyalty to the Constitution they sworn to protect. GEN Milley like others recognizes we have individuals in our military being radicalized by anti-government Fundamentalists on Social Media using terms like Socialism, White minority, anti-Christian, States rights, and Deep State to recruit military Veterans. So yeah, watching news channels in headquarters buildings where the topics are constantly about how the Left is destroying America or how the election was stolen or how people of Color are un-American, yeah I find it problematic in my opinion.
(2)
Reply
(0)

SFC (Join to see)
4 mo
MAJ James Woods - All of what you say is true sir, but you leave some items out: Milley advocating for CRT and woke concepts becoming part of our military; not to mention him not doing the honorable thing when President Biden ordered immediate withdrawal of Afghanistan without providing for the safety of our citizens and allies. I find it amazing that Milley made it know he was thinking about resigning over something stupid like the Church Picture, and then doesn’t have the balls to do anything when we alienate our world allies for longer than we will all be alive for screwing up Afghanistan.

At the end of the day our service members need to be free to read and think what they want as long as they can fulfill their oath, just as it's always been. To try to be the thought police with our military is wrong and no good will come from it no matter how much some try to justify it. Mark my words.
(1)
Reply
(0)

MAJ James Woods
4 mo
SFC (Join to see) Well since CRT looks at indicators of racial discrimination within institutions and systems, i don't think it would hurt military leaders to understand how only 70+ years since integration of our military, are we still seeing discrimination or prejudices in our system? Do you find yourself taking race into consideration when evaluating a subordinate? Hell we can expand that to other forms of discrimination; call it Critical Race, Gender, Religion, Orientation Theory.
Bottomline, any military leader that views CRT or any other academic discussion about discrimination as offensive needs to self reflect a bit.
Lastly, yeah the withdrawal was FUBAR and the planning should've began under the previous administration that set the timeline. As Bush did to Obama, Trump did to Biden. Any withdrawal is going to be ugly and both administrations were responsible. I'm more pissed off at the drone strike killing the family in retaliation than i am about the withdrawal. I expected higher casualties from the withdrawal just from historical data points from past US withdrawals.
(2)
Reply
(0)

SFC (Join to see)
4 mo
MAJ James Woods - Sir,
Who approved the curriculum the current CRT folk are teaching? Not me or anyone I know. A part of the CRT definition: “Critical race theorists hold that racism is inherent in the law and legal institutions of the United States insofar as they function to create and maintain social, economic, and political inequalities between whites and nonwhites, especially African Americans.”. I am sorry but I just don’t agree with this statement, and I never will. When my grandfather told me about the coal miners who died in the mines with their bodies being dropped off by the Company on a front porch, along with wrongs of the laws, systems, institutions, or whatever you want to name them, well I personally know there are more than one form of slavery. No form of slavery is greater or lessor than another. My grandparents endured and gave their children a better life, who in turn gave me a better life. Should my grandfather and others like him have burned cities, looted, and killed people because they were being taken advantage of? No. The important thing to remember is there is no equal outcome, only equal opportunity for people in our Country. I look at some of the grandparents of my grandchildren’s friends and see many weren’t as fortunate as I, is this my fault they are still poor and uneducated. Some are better off than me, is that the fault of the ones better off. No, of course not. But here people are saying the system, or maybe the man, is keeping them down. Of course, this is bull.

I would respectively submit that over 200 years under our Constitution we solved most of the wrongs that were inherent about racism back in the 1700’s. it was a slow painful process from the 1700’s until now, but our nation and our people got it done. Is it perfect? No. Nothing is ever perfect except for God. It is worthy to note good progress was steadily being made until the late 1990’s when current day Democrats decided to go scorched earth and destroy “anyone” who stands between them and their goals.

Now the interesting thing about this current form of CRT is they are willing to burn down (destroy) every institution and law up to and including our Constitution to accomplish their so called goals. I don’t know about you, but I took an oath to protect our Constitution. I will stay true to my oath.

It’s good that we can reasonably speak with one another, not everyone here on RP can, as a matter of fact some are very uncouth. I see you have some positive points on your side; hopefully you see I have some on my side. We vote for candidates we support, or who support our ideas of what we believe our nation is supposed to be. When our elected officials go over the line (break the law), we must trust the courts to read and judge the law as it is written, if they don’t then our system doesn’t work. If our Grand Experiment doesn’t function pretty much as I describe it, we are doomed as a people. I will probably not see it that far. I am afraid for my grandchildren.

It’s interesting to note the last 2 times our Presidents took blatantly illegal actions “that they admitted were illegal” before they issued the orders: President Obama with the Dreamer Kids, and President Biden with OSHA Vaccine Mandates.

Lastly if we can’t live under the laws and rules that allowed us to progress to this point: President Biden might as well ask the Chinese to come to our Country to provide us security, much the same way he asked the Taliban to secure Afghanistan before all our people and allies were out. MHO’s. I am done on this post; we will have to agree to disagree.
(0)
Reply
(0)
Read This Next
RallyPoint Home