PO1 William "Chip" Nagel
925
4
0
4
4
0
The Air Force together with the bomber's manufacturer, Northrop Grumman, published three new concepts of the next-generation bomber, showing the stealth aircraft in various hangars at bomber bases across the US.

One shows a concept of the B-21 tucked away in a hangar at Ellsworth Air Force Base, South Dakota, currently a B-1B Lancer base; a second shows the aircraft at Whiteman Air Force Base, Missouri, which currently houses the B-2 Spirit; and a final photo presenting the B-21 at Dyess Air Force Base, Texas, also a B-1 base.

Last year, the service announced the B-21's first operational base would be at Ellsworth and would also host the bomber's first formal training unit. Whiteman and Dyess are expected to receive B-21 Raiders "as they become available," the service said at the time.

The B-21 is still years away. Officials have said first deliveries should begin in the mid-2020s, but have been careful not to broadcast too many other details in order to protect details about the B-21's technology.

While enthusiasts have compared the squat, sleek profile of the B-21 to the B-2 stealth bomber — also developed by Northrop — a specialist for military aviation at the Congressional Research Service was quick to point out one potential difference.

Altering the photo's contrast, "it becomes evident that what looks like the 'beak' is the port leading edge. The nose (as depicted) is not as sharp as B-2," Jeremiah "JJ" Gertler tweeted Friday. 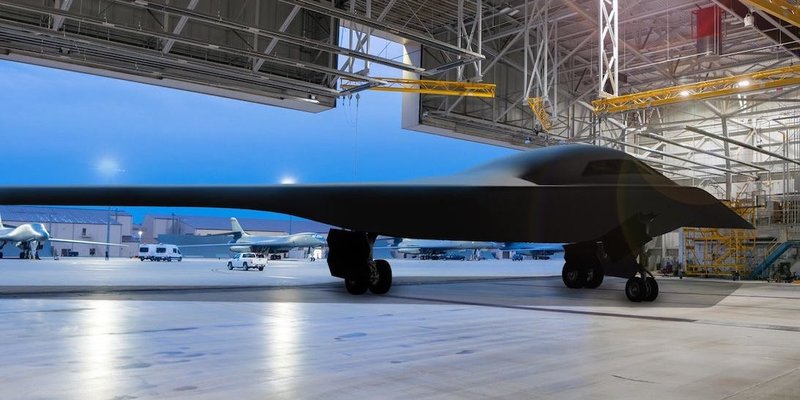 Dyess AFB
Posted >1 y ago
Read This Next
RallyPoint Home