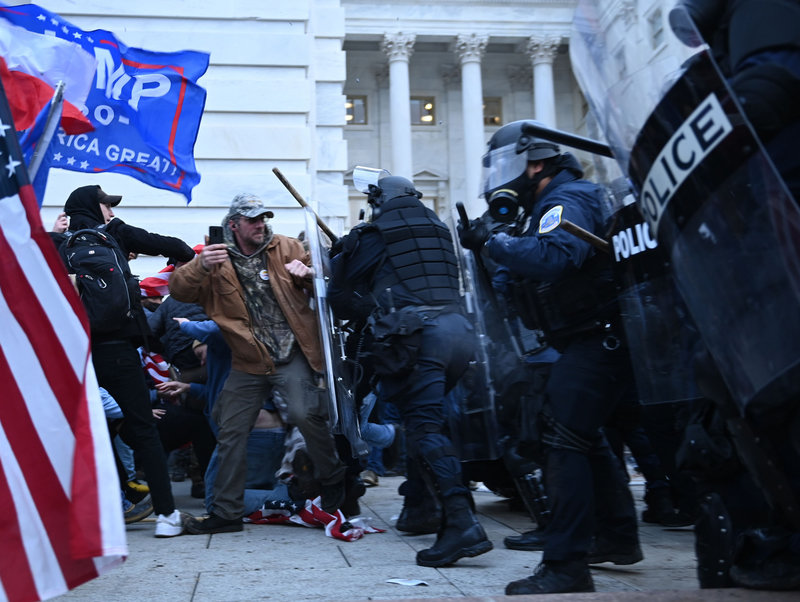 PO1 (Join to see)
Edited 5 mo ago
Posted 5 mo ago
The cognitive dissonance this event caused in light of the BLM riots and their inciting incidents of police wrongful deadly use of force is amazing. The hypocrisy is a miasma that lays thick around those that just weeks before were supporting the BLM riots and defunding the police.. remember ACAB. Also those on the thin blue line crowd are just waking up to police abuses... welcome to the party abet a bit johnny come lately. The middle ground is accountability for all involved in such incidents ignoring which group identify they have and just dispassionately looking at the facts of the case unbiased and colored by their allegiances.
(5)
Comment
(0)

SSgt Joseph Baptist
3 mo
There are many of us who support good cops and denounce bad cops. Peopel who look at each incident based on the actions of the suspect/s anmd officer/s invoilved - ratehr than political alliances, skin colors, etc.
(1)
Reply
(0)

SSgt Joseph Baptist
3 mo
I am generally "pro-cop", but don't give them a free pass on killing suspects.

Michael Brown - Justified shooting, but a lot of confusing evidence/testimony at the start - and poorly handled by department. Should have been a suspension and very public investigation. From the start, the purely defensive shooting was clearly justified, but the later shots, when witnesses initially claimed (and then retracted claims) that he had his hands up and was begging "Don't shoot", it looked bad. But when later analysis showed that Brown had turned and was charging the officer, and the initial witnesses changed their story once under oath, it became clear that it was justiofied. However, intitial treatment of protesters and even the media showed a lack of professionalism, and many cops that were clearly out of control and who thought they were above the law.

Tamir Rice (also Andy Lopez and other kids shot while in possession of toy guns, that they were nto using in a threatening manner) - unjustified shooting. Criminally negligent choice by dispatcher to omit vital details form the phoned in report (child, not threatening anyone, looks like they are playing with a toy gun) did not help, but when officer opened fire before the patrol car had even stopped - making zero effort to evaluate the situation or whether there was any actiual threat - that goes into "bad shoot" territory, and prison time is called for.

Breonna Taylor (also Jose Guerena, Duncan Lemp, and dozens of others - including an influx of people killed during "Red Flag" gun seizures, where no due process is applied) was killed during a dangerous, late night "no knock" raid that was poorly planned and executed (no pun intended) – at a level that shows criminal negligence. In many of these fatal “no knock’ raids, it turns out that the police are using dubious sources to justify the raids, and often lie on their warrant applications. When citizens are surprised by unidentified armed intruders in the night, and take reasonable measures to protect themselves and families, indiscriminate and undisciplined police actions result in the deaths of those attempting to defend themselves or even of bystanders (who are sometimes asleep).
In these cases, the trigger-pullers need to face negligent homicide charges, at the least, any who participate in planning or authorizing such dangerous raids also need to face similar charges (including judges or Das who sign off on “bad”/“shaky” warrants that result in injuries or deaths) and any who participate in using falsified information to obtain these warrants need to go up for first degree murder, and criminal conspiracy to commit first degree murder.

Philando Castille (also Daniel Shaver – who was tortured and murdered by a group of police officers who escaped accountability for their actions) and others who were shot by police while they were complying with police orders. The officers involved need to face charges of negligent homicide or higher, along with charges of dereliction of duty for the other officers on scene who watched them doing these things, and allowed these killings to happen. In Castille’s case he was following the instructions of the lead officer, when the other officer – who was not paying attention – shot and killed him. In Shaver’s case, the lead officer spent several minutes torturing and humiliating Shaver, and none of the officers did their duty and stopped him (or arrested him for his criminal behavior – as they should have), and ended up executing Shaver while he begged for his life.

George Floyd – A career criminal, arrested for felony counterfeiting, who ate the illegal drugs in his possession to avoid felony drug charges, who was uncooperative – if not restraint – to arresting officers, who died of a drug overdose while in police custody, and being restrained in a manner which was not appropriate. Bad optics for the officers – particularly for the senior officer, who was the one who was “hands on” with Floyd when he died. All were summarily suspended/fired. The lead officer was (wrongfully) convicted of 2nd and 3rd Degree murder, by a court driven by pressure from politicians who feared more riots. The lead officer should certainly have faced serious disciplinary action – most likely fired – but criminally, this should have been, at most, negligent homicide.

One major injustice that these have in common is the racism inherent in how they are reported in the media, and by public officials/politicians. In many cases, you may be familiar with the case of the black suspect who died, but not the non-black suspects that were killed in similar circumstances. All of their lives should matter, regardless of skin color.

Another major injustice is in how race and racism skews investigations and prosecutions of cops who violate the law and use excessive force. Those who harm non-black victims will often get a free pass in the courts, as they are given a free pass in the media.

Then, of coure, there are multiple career felons who were killed by police while resisting arrest, or using guns or knives to attack police or others - In these cases, the police are generally justified in using deadly force, no matter what the racist idiots at BLM say.


It is worth noting that Breonna Taylor was an "also ran" victim in BLM propaganda - she is female, a non-felon, and was not resistinga rrest or threatening the police when she was killed. An absolute innocent, and so BLM didn't immediately latch on to her case like they do to violent male career criminals killed while resisting arrest or attacking police.

And then we have Ashli Babbitt – An unarmed, political protester who was engaged in misdemeanor trespassing on public property. She was killed by a cop who was not in uniform, never identified himself as a cop, never gave her any warnings or commands to stop or halt, and never even attempted to use any “less-lethal” means to gain compliance or apprehend her. In this case, it was a black cop who killed a white female suspect.
Multiple other cops who were in the vicinity – several of whom were closer to her than the shooter – did not see her as posing any credible threat. The shooter could see that her hands were empty, and she did not present an imminent threat to either him or any other person. His claim is that he heroically saved hundreds of lives because she could have had a weapon in her pocket or backpack, and that she could have, at a later time, presented a threat to someone else is ridiculous on its face. The officer has a history of negligence around firearms, and ignoring firearms safety policy. His corrupt agency and a corrupt partner agency conspired together to cover up his crime, prevent the release of evidence to his victim’s family and lawyers, and kept his identity secret for over half a year, giving him and them time to scrub any social media or other indicators of preexisting bias that may have indicated that his actions were based on bias, or even constituted a “hate crime”. This guy is a bad cop, and is guilty as sin.
(1)
Reply
(0)

PVT Mark Zehner
Posted 5 mo ago
This case seems very strange! Should have been investigated by an outside agency! Definitely in house was a huge mistake!
(4)
Comment
(0)

SrA Marc Haynes
Posted 5 mo ago
I was kind of thinking he might be charge with a hate crime!
(4)
Comment
(0)
Show More Comments
Read This Next
RallyPoint Home