The Battle of Bosworth Field

SGT (Join to see)
376
9
2
6
6
0
On August 22, 1485, at the Battle of Bosworth Field, Henry Tudor's forces defeated English King Richard III during the last battle in the Wars of the Roses. Richard was killed, and he became the last English monarch to die in battle. In the immortal words of William Shakespeare, "A horse, a horse, my kingdom for a horse."An excerpt from the article:

"One of the most important battles in English and Welsh history took place at Bosworth during the 15th century Wars of the Roses.

Early in August 1485 the would-be Lancastrian king, Henry Tudor sailed across the English Channel from France to south Wales with a force of around 2,000 men.

Marching through the Welsh countryside the ranks of the Lancastrian army swelled, until by the time they crossed the border into Shrewsbury their number had more than doubled in size.

On hearing the news of Henry’s landing, King Richard III began to muster his Yorkist army at Leicester. With his royal army now almost 10,000 strong, the king deployed his troops on a hill top, just south of Market Bosworth in Leicestershire.

On an adjacent hilltop stood the forces of Henry’s stepfather Thomas, Lord Stanley, with a fairly substantial private army totalling around 6,000 men. In the bloody battle that followed, Stanley elected to simply stand and spectate.

As the battle swayed first one way and then the other, Richard appears to have decided to bring the encounter to a swift end by leading a charge aimed directly at Henry.


On seeing Richard separated from his main force, Lord Stanley finally decided to join the battle on the side of his stepson. After his horse became trapped in boggy ground, the king continued to fight on foot before he was finally overwhelmed.

Richard was the last Plantagenet king of England, and the last English monarch to be killed in battle. On seeing their leader’s fate, the Yorkist army abandoned the field. Richard’s crown was brought to Henry who was proclaimed king on the nearby Crown Hill.

The new Tudor dynasty would rule England for the next hundred years. Richard’s body was interred in a plain unmarked tomb at Greyfriars in Leicester and forgotten about, until it was rediscovered under a car park by archaeologists in September 2012." 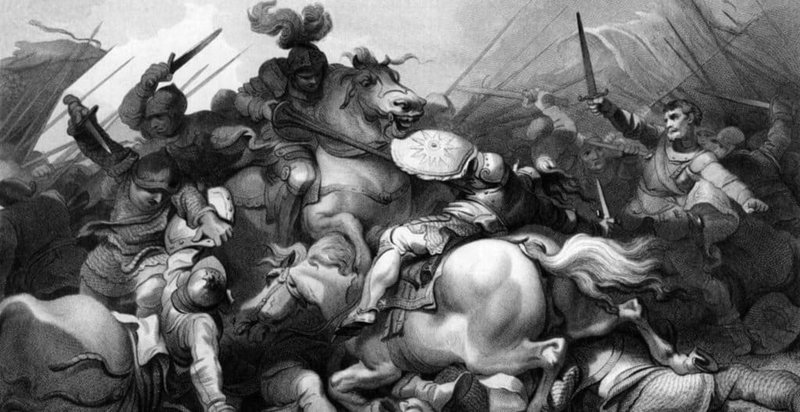 The Battle of Bosworth Field

Posted from historic-uk.com
Posted in these groups: