"The United States invasion of Grenada began on 25 October 1983. The invasion, led by the United States, of the Caribbean island nation of Grenada, which has a population of about 91,000 and is located 160 kilometres (99 mi) north of Venezuela, resulted in a U.S. victory within a matter of days. Codenamed Operation Urgent Fury, it was triggered by the internal strife within the People's Revolutionary Government that resulted in the house arrest and the execution of the previous leader and second Prime Minister of Grenada Maurice Bishop, and the establishment of a preliminary government, the Revolutionary Military Council with Hudson Austin as Chairman. The invasion resulted in the appointment of an interim government, followed by democratic elections in 1984. The country has remained a democratic nation since then.

Grenada gained independence from the United Kingdom in 1974. The Marxist-Leninist New Jewel Movement seized power in a coup in 1979 under Maurice Bishop, suspending the constitution and detaining a number of political prisoners. In 1983, an internal power struggle began over Bishop's relatively moderate foreign policy approach, and on 19 October, hard-line military junta elements captured and executed Bishop and his partner Jacqueline Creft, along with three cabinet ministers and two union leaders. Subsequently, following appeals by the Organisation of Eastern Caribbean States and the Governor-General of Grenada, Paul Scoon, the Reagan Administration in the U.S. quickly decided to launch a military intervention. U.S. President Ronald Reagan's justification for the intervention was in part explained as "concerns over the 600 U.S. medical students on the island" and fears of a repeat of the Iran hostage crisis.

The U.S. invasion began six days after Bishop's death, on the morning of 25 October 1983. The invading force consisted of the U.S. Army's Rapid Deployment Force (the 1st and 2nd Ranger Battalions and 82nd Airborne Division paratroopers); U.S. Marines; U.S. Army Delta Force; U.S. Navy SEALs, and ancillary forces totaling 7,600 U.S.troops, together with Jamaican forces, and troops of the Regional Security System (RSS).[7] They defeated Grenadian resistance after a low-altitude airborne assault by Rangers on Point Salines Airport at the south end of the island, and a Marine helicopter and amphibious landing on the north end at Pearls Airport. The military government of Hudson Austin was deposed and replaced by a government appointed by Governor-General Paul Scoon.

The invasion was criticised by several countries including Canada. British Prime Minister Margaret Thatcher privately disapproved of the mission and the lack of notice she received, but publicly supported the intervention.[8] The United Nations General Assembly, on 2 November 1983 with a vote of 108 to 9, condemned it as "a flagrant violation of international law".[9] Conversely, it enjoyed broad public support in the United States[10] and, over time, a positive evaluation from the Grenadian population, who appreciated the fact that there had been relatively few civilian casualties, as well as the return to democratic elections in 1984.[11][better source needed][12] The U.S. awarded more than 5,000 medals for merit and valor.[13][14]

The date of the invasion is now a national holiday in Grenada, called Thanksgiving Day, which commemorates the freeing, after the invasion, of several political prisoners who were subsequently elected to office. A truth and reconciliation commission was launched in 2000 to re-examine some of the controversies of the era; in particular, the commission made an unsuccessful attempt to find Bishop's body, which had been disposed of at Hudson Austin's order, and never found.

For the U.S., the invasion also highlighted issues with communication and coordination between the different branches of the United States military when operating together as a joint force, contributing to investigations and sweeping changes in the form of the Goldwater-Nichols Act and other reorganizations. 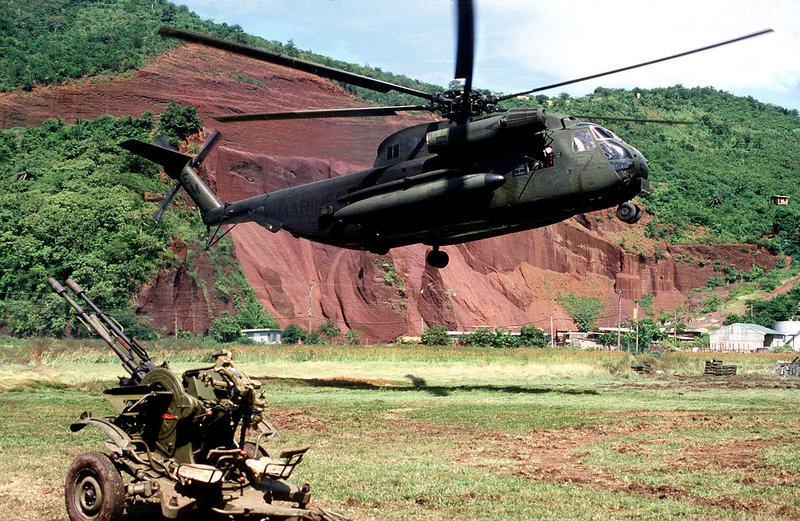 SGT David A. 'Cowboy' Groth
Posted 3 y ago
Our battalion was put on standby alert when this went down.
(8)
Comment
(0)

SSG Harry Outcalt
3 y
Was a mess the Seal's never made it to shore because they were dropped 25 miles from shore ... They were rescued floating around the ocean ..
(1)
Reply
(0)

MSgt Dale Johnson
Posted 3 y ago
I was at Pope AFB where they launched from, my crew was on duty for the Midnight Shift. Looking down from the Control Tower we saw quite a number of uniformed and non-uniformed guys checking gear, including automatic weapons on the ramp below us about an hour before they loaded up.
(7)
Comment
(0)

SSG Robert Webster
3 y
Kind of curious - MSgt Dale Johnson where were all these non-uniformed guys checking gear? Over on Green Ramp?
(1)
Reply
(0)

MSgt Dale Johnson
3 y
Don't remember name of the ramp, but it was just SW of the Tower on the opposite side of the runway from the main ramp.
(0)
Reply
(0)

SSG Robert Webster
3 y
MSgt Dale Johnson - Quite interesting, but wasn't the Tower (control tower) on the South and West side of the flight strip? Sounds like your referencing what is now called Red Ramp, which did not exist in 1983. Though at the time there were a couple of 'hot pads' where C-5s were usually parked. Yellow Ramp is/was adjacent to the Tower. The only Ramp that it could have been was Green Ramp, which is SW of the Tower but on the same side of the runway as the 'main' ramp, which is where I was located for most of the load out. Silver, White, and Blue Ramps were the major parking area across the field from the Tower (though I understand that some of the names have changed since that time).

MSgt Dale Johnson
3 y
Runway was 5/23 and the Tower was on the SE side of the runway, and if memory serves me right (not always something I would bet on...LOL) it was a C-5 that was below us at the time. Clam Shell doors stand out in my memory of that evening.

On a side note, do you remember a really old retired guy, nicknamed "Kraut?" His wife's name was Sylvia. They were one of the nicest couples my wife and I had the priviledge of knowing. They were neighbors for about a year before we moved, seemed to me he knew about everyone there in the 82nd. Every weekend they had a good sixe crowd for a cookout and I don't remember seeing anyone there more than once. Beer could have influenced that though.
(0)
Reply
(0)
Show More Comments
Read This Next
RallyPoint Home