PO1 William "Chip" Nagel
2.23K
33
9
9
9
0
https://www.middleeasteye.net/news/us-commanders-recommend-letting-kurdish-fighters-syria-keep-weapons [login to see]
US commanders planning for the withdrawal of their troops from Syria are recommending that Kurdish fighters battling Islamic State (IS) be allowed to keep US-supplied weapons, four American officials have said, a move that would likely anger NATO ally Turkey.

Three of the officials, speaking on condition of anonymity, said the recommendations were part of discussions on a draft plan by the US military.

The US told the Kurdish People's Protection Units (YPG) that they would be armed by Washington until the fight against IS was completed, one of the US officials said.

"The fight isn't over. We can't simply start asking for the weapons back," an official told the Reuters news agency.

The proposal to leave US-supplied weapons with the YPG, which could include anti-tank missiles, armoured vehicles and mortars, would reassure Kurdish allies that they were not being abandoned.

Ankara which views the YPG as an extension of a Kurdish insurgency inside Turkey, has threatened to launch an offensive against the YPG, raising fears of a surge in violence that could harm hundreds of thousands of civilians.

Turkey wants the US to take the weapons back, so the commanders' recommendation, if confirmed, could complicate Trump's plan to allow Ankara to finish off the fight against IS inside Syria.

The Pentagon keeps records of the weapons it has supplied to the YPG and their chain of custody. But, the US officials said, it would be nearly impossible to locate all of the equipment.

"How are we going to get them back and who is going to take them back?" one of the officials asked. 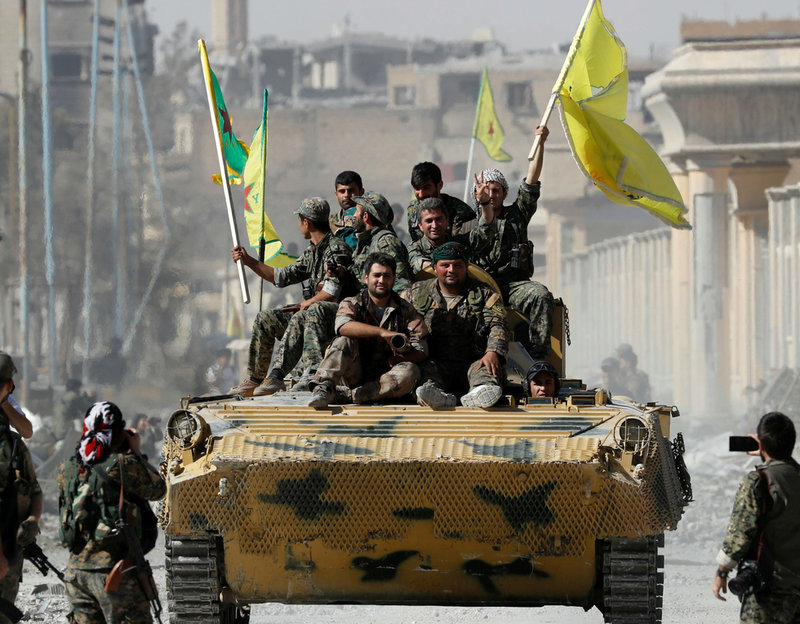 Posted from middleeasteye.net
Posted in these groups:

Lt Col Charlie Brown
Posted 3 y ago
They were and still should be, our allies.
(5)
Comment
(0)

SPC David Stephenson
3 y
Only decent force with a will for self governance in the region.
(0)
Reply
(0)

Maj Robert Thornton
Posted 3 y ago
Leave the weapons with the Kurds!
(5)
Comment
(0)

SGT (Join to see)
Posted 3 y ago
I.S. cannot be allowed to run roughshod over that region of the world. The "Family Feud", and Ethnic Cleansing that is going on in the middle east needs to be settled. The young Muslims are being lied to by a few old Mullahs and Imams. I am reminded of an older saying. "Power corrupts, absolute power, corrupts absolutely".
(3)
Comment
(0)
Show More Comments
Read This Next
RallyPoint Home