Arc Light marked beginning of B-52 involvement in Vietnam

"BARKSDALE AIR FORCE BASE, La. (AFNS) -- Editor's Note: This is the first in a series of articles highlighting the B-52's involvement in the Vietnam Conflict up to Operation Linebacker II. The 40th Anniversary of Linebacker II takes place Dec. 18-29.

By 1972, the war in Vietnam had persisted for more than eight years, characterized by a gradual, but massive buildup of U.S. forces. That massive buildup began in April 1965, with the highly-publicized event of U.S. Marines wading out of the sea and onto the beaches of Da Nang, South Vietnam. Concurrent to this, and to support those ground forces, the Air Force deployed a portion of its tactical fighter-bombers to air bases located in South Vietnam and later Thailand. However, prior to this and in a less publicized move, Strategic Air Command deployed its first contingent of B-52 Stratofortresses to the tiny island of Guam in support of what became known as Operation Arc Light.

Strategic Air Command had always harbored a residual conventional capability with its bombers, but it was not until the early 1960s that its leaders began planning for limited war capabilities, a capability that called for conventional weapons rather than nuclear. After several tests in the spring of 1964, SAC declared a small portion of its B-52F fleet ready for conventional combat and in February 1965, deployed 30 of the conventionally-laden bombers to Andersen Air Base, Guam. The crews, who hailed from Mather and Barksdale Air Force Bases, planned to strike targets located in North Vietnam.

Despite preparation, after arrival, SAC quickly relegated the crews to six-hour alert commitments rather than sending them into combat. For the next few months, those crews continued to study contingency strike folders that contained both Phuc Yen airfield and Haiphong harbor as targets. But, as the United States delayed using the B-52, the North Vietnamese improved air defense systems. With the addition of sophisticated Russian-made surface-to-air missiles (SAMs) the probability of using the B-52 against targets in North Vietnam diminished. In the meantime, the 2nd Bomb Wing rotated home replaced by the 7th Bomb Wing.

However, Gen. William C. Westmoreland, commander of U.S. Forces in South Vietnam, was convinced that the B-52 could fill a void that the tiny, tactical fighter-bombers could not. In the same month that the B-52s arrived at Andersen AB, he began lobbying for the big bombers to pattern-bomb the Viet Cong who had been operating in South Vietnam. After much debate, that included strong hesitation on SAC's part, on June 18, 1965, the B-52 entered combat as part of Operation Arc Light.

On that day, 30 bombers (15 from the 7th BW and 15 from the 320th BW) took off from Andersen AB, headed for a target located in South Vietnam and measuring about one mile by two miles square. Earlier, weapons technicians had loaded twenty four of the B-52s with 51 750-pound general purpose bombs while the remaining six carried 27 1,000-pound semi-armor piercing bombs internally and the normal 24 750-pounders externally. In all, the 30 bombers carried 1,530 bombs into combat.

Unfortunately, that first mission was fraught with difficulty. It began with tragedy when two of the B-52s collided, killing eight of the crew while another was declared as missing-in-action. Next, another bomber with mechanical malfunctions could not receive fuel from an orbiting KC-135 Stratotanker and had to return to Guam. Lastly, prior to arriving at the target, several aircrews realized they would not be able to release their weapons due to mechanical malfunctions. Nonetheless, the remaining B-52 crews entered the target area and released 1,299 bombs.

A quick survey by allied recon teams found little to no damage in the target area and few dead. The press immediately focused on the unorthodox use of a strategic bomber drawing the analogy of "using a sledge hammer to kill gnats." But, while the criticism tended to focus on the costly B-52 air-to-air collision, the military considered the mission a success. Historians later wrote, "that the B-52's mission was to harass the VC, to disrupt his normal activities, to permit him no respite from danger even in his jungle redoubts, and to wear him down psychologically."

However, in the months that followed, while B-52 crews continued to harass the Viet Cong, they eventually accepted a new mission, a mission to directly support the allied ground forces. This began in November 1965 during the Battle of the Ia Drang Valley, the first major encounter of the war between U.S. Troops and the North Vietnamese Army. But later in December, B-52 crews also supported the Marines during Operation Harvest Moon.

By the end of 1965, SAC's 30 bomber force had increased its monthly sortie rate to roughly 300 and by the end of 1966 more than half the B-52 strike requests came from field commanders. The Air Force had convinced ground commanders that the Cold War nuclear bomber could be used as a conventional juggernaut. So it came as no surprise when General Westmoreland requested that the Air Force produce 800 B-52 sorties per month and to reduce the time it took to get to the target.

Of course the immediate answer to producing more sorties was to expand Andersen AB and increase the number of bombers to 70. However, the bombers would still be 2,500 miles away from the targets in Vietnam. In November 1966, SAC increased the B-52s at Guam to 50 and began producing 650 sorties per month. However, SAC later deployed an additional 11 B-52Ds and met the 800 sorties per month. This did not immediately solve the time on target issue, but eventually, the United States built a second Arc Light base at Thai Navy airfield at U-Tapao on the Gulf of Siam. It began initially as a shuttle bombing base where B-52 crews would take off from Andersen, fly their missions, recover and rearm at U-Tapao, and then fly another mission and return to Andersen.

In 1969, the Air Force upgraded U-Tapao to a main operating base. It was closer to the targets reducing the mission times by two thirds as those launched from Guam, and therefore reducing the time to get to the target. In addition to Andersen and U-Tapao, in February 1968 as north Vietnamese launched its Tet Offensive, SAC began staging bombers at Kadena Air Base, Japan.

During the Tet Offensive, two North Vietnamese divisions of about 20,000 men cut access to Khe Sanh and trapped 6,000 U.S. Marines and South Vietnamese rangers. To support the besieged ground troops, SAC increased its monthly sortie rate to 1,800 and on an average day, sent 60 B-52s to pound the enemy, carpet-bombing a 1.2-mile strip, which created havoc among the besiegers. Westmoreland later stated that "The thing that broke their backs was basically the fire of the B-52s."

In a short amount of time during the war in Vietnam B-52 crews transformed the aircraft from a Cold War nuclear bomber to a close-air-support juggernaut. B-52 crews provided support to ground forces, harassed the Viet Cong, and wrote a new chapter in the bomber's history." 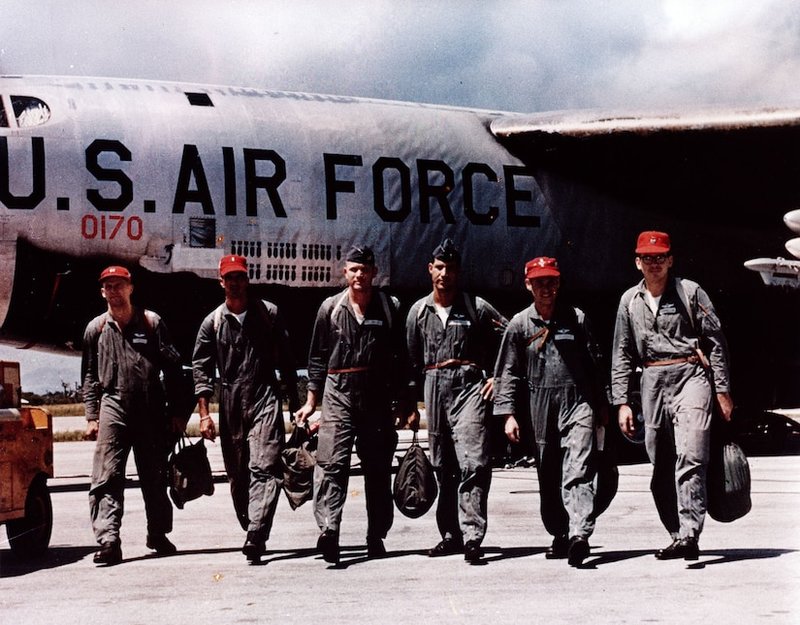 Arc Light marked beginning of B-52 involvement in Vietnam

Posted from af.mil
Posted in these groups:

Lt Col John (Jack) Christensen
Posted 1 mo ago
By the time I arrived there in 1971 Arc Light was a finely tuned operation. I flew missions from UTapao RTAFB, Thailand, Kadina AFB, Okinawa and Anderson AFB, Guam, but for several reasons our crews spent most of our time at UTapao. Something I didn't know at the time, but learned from CWO3 Dennis M. was that in the early days of the war Thailand wouldn't allow American bombers to operate from its airfields. By my time time that had all changed and they were winding down the Kadina operation so we only flew one cycle from there. I flew all the Linebacker I missions but had rotated back home by the time Linebacker Ii rolled around. Did go back for another Arc Light tour in 1973.
(10)
Comment
(0)
Show More Comments
Read This Next
RallyPoint Home