Behind Colt's bankruptcy: Financial engineering that backfired. Your thoughts? 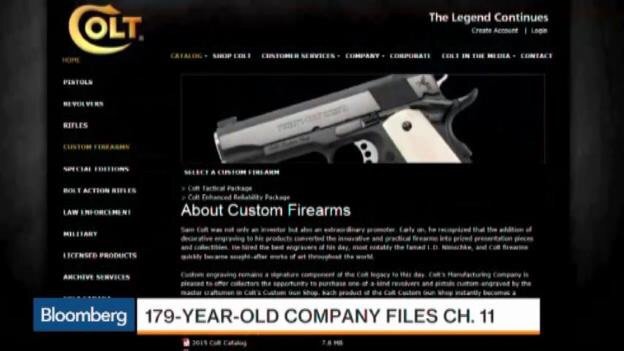 The gun company founded by Samuel Colt has flirted with financial disaster for much of its 179- year history. Now the storied West Hartford (Conn.) maker of rifles and pistols is heading into Chapter 11, in large part because of more than a decade of dubious financial engineering and accumulating debt.
Colt Defense, as the main part of the company is now known, filed for bankruptcy protection on Sunday while listing as much as $500 million in debt. Cooling demand for its civilian semiautomatic rifles and handguns, as well as delays in certain large U.S. government and foreign military orders, have exacerbated the company's finances. But the main reason the company hasn't weathered rocky market conditions since the winding down of the wars in Iraq and Afghanistan is that the New York financiers who control the company borrowed too much and paid themselves lavishly.

As I reported in a feature story last year, the private equity firm Sciens Capital and its affiliates loaded Colt with debt since the mid-2000s while taking cash out in the form of "distributions" and "advisory fees." Sciens remains the controlling owner of Colt Defense, according to a regulatory filing. An executive with Sciens did not immediately return a message seeking comment.

In 2009 and 2010, meanwhile, Colt somehow missed out on the "Obama surge," a run of strong civilian gun sales prompted by fears whipped up by the National Rifle Association that the Democratic president would stiffen federal gun control. The panic-based buying that lifted the small arms industry has now eased, making it even more difficult for Colt to move the military-style semiautomatic rifles it had hoped would be its salvation. "The industry's recent rapid growth is expected to slow over the next five years, increasing at a more modest average annual rate of 4.1 percent," according to the research firm.

SFC Tyrone Almendarez
Posted >1 y ago
Another example of American greed...A company who employed numerous people with families goes under because of greed. Let's keep believing on trickle down economics. I'm waiting for the rich guy to do the right thing.
(5)
Comment
(0)
show previous comments

SFC Tyrone Almendarez
>1 y
American greed is what is destroying this country. It's what drove Detroit to be a ghost town. It's what has all the jobs in China instead of here in the U.S.
(1)
Reply
(0)

MSgt (Join to see)
>1 y
Actually it is the cities currant and past administrations in power who have ruined Detroit.
(1)
Reply
(0)

SFC Tyrone Almendarez
>1 y
Huh? Union is what kept it going for so long. Unions at one time protected the worker. Everyone says Union like its a bad word. Greed is what happen to Detroit.
(0)
Reply
(0)

MSgt (Join to see)
>1 y
Greed did destroy Detroit. Look at who was running that dump and continue to run it today. They are the source of the greed and ignorance we see. Colt's backers are the same way. Look who they are. NYC Financial Backers? Please. They knew what they were doing when they started backing Colt. They had one major objective and that was to run it into the ground.

They stopped listening to their customers and stopped making the things we wanted. They overprice their products and no longer have the Quality that would warrant the prices. Their products are starting to be more garbage than anything... High Priced Garbage.
(1)
Reply
(0)

SSG Roger Ayscue
Posted >1 y ago
Colt has one major problem. In the early 2000s shifted toward more governmental and less and less civilian sales.
Colt stopped production of it's Very Popular revolver line. The Colt Python, Trooper Special, King Cobra and others were the top selling revolvers in their line. Even today, these revolvers would sell out as soon as they hit the shelves.

Colt also stopped listening to it's customers. IF you look at the Colt catalog this year, you will find NOTHING Original. Colt has not fielded anything that was new or revolutionary since ... Eugene Stoner was daft enough to sell them the patent on the AR15.

Colt did this to themselves. They can recover quickly if they began production of the Python, Cobra and trooper specials again, and price the guns that they do make to a level that the average gun owner can afford a Colt.
(4)
Comment
(0)

Sgt Aaron Kennedy, MS
Posted >1 y ago
Colt has been trading on its name (brand) for far too long, without "product" to back it up.

From the dealer side, they were "impossible" to get, too high in price, and the quality didn't justify it, relative to others in the marketplace. This resulted in CONSTANT loss of market share.

It's great to have a well known name, but if you can't deliver an associated product, you can't generate profit, which is the sole reason to be a business.
(4)
Comment
(0)

SGT (Join to see)
>1 y
Sgt Aaron Kennedy, MS, Family members must have bankrupt them. Kids who take over their parents businesses sometimes do that. Either that, or they have a terrible auditor.
(2)
Reply
(0)