Ben Carson thinks giving up certain torture techniques would be too PC. 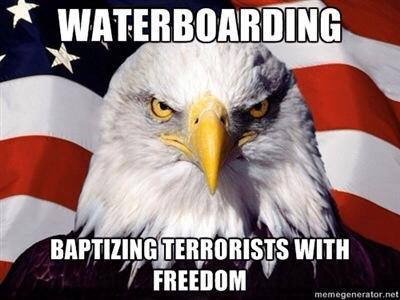 Stephanopoulos asked Carson if he agreed with GOP candidate Donald Trump that the U.S. should resume waterboarding, an "enhanced interrogation technique" President Barack Obama discontinued in 2009.

"There's no such thing as political correctness when you're fighting an enemy who wants to destroy you," Carson said, "and I'm not one who's real big on telling the enemy on what we're going to do and what we're not going to do."

Carson also said he favored surveillance of mosques, essentially repeating something he said on Saturday.

"We should monitor anything -- mosque, church, school, you know, shopping center -- where there's a lot of radicalization going on," Carson said.

MAJ (Join to see)
Posted >1 y ago
Why does anyone applaud this kind of ridiculous bravado? We already know that torture doesn't work, so the only reason we torture people is to punish them. Don't we have another justice system for that?

Did we somehow just forget that whole Law of War thing? Was that just a "good idea" for everyone else, but not really applicable to US? Or maybe it doesn't count because the enemy doesn't have a real country? Is that really the big difference? Eddie Izzard would count them as good because they have a flag!

Can we really sit here with a straight face and say "We support the Constitution" and yet blatantly advocate for exactly the opposite of what the Constitution stands for? Muslim internment camps? Special ID cards? Tracking? Osama may be dead, but there is no question that he absolutely achieved his objective. The United States is no longer the land of the free or the home of the brave - we've let ourselves become the land of security theater and the home of the internet tough guy.
(5)
Comment
(0)

It's not an effective tool. Why the hell would we use a tool that isn't effective, unless it is for some perverse sort of revenge?

It doesn't work, and it's wrong. Don't do it. How hard is that to understand?!? It's in the FM and has been for 40~ years. It's been codified in Law for longer than that.

This isn't a case of "sometimes you need to break someone's fingers to find out where the nukes are." That's what Sodium thiopental is for. If it's really a big deal, get a damn warrant, and inject the $*&%& with "truth serum."

Sgt Aaron Kennedy, MS
>1 y
SGT (Join to see) - It's hard to calm down, when we start talking openly about allowing Torture. Calling it "enhanced interrogation" or some other legalese name doesn't change what it is. Doesn't make it right.

It's hard to calm down when we have main stream frontrunners for the Presidential election talking about registering people based on Religious preference.

This kind of talk is what makes us look like barbarians. The only way we can maintain the moral highground to actually use force where necessary in the rest of the world is if we are beyond reproach when we do use force.
(1)
Reply
(0)

SGT (Join to see)
>1 y
Sgt Aaron Kennedy, MS, I'm totally against registering anyone for their religious preference. That sounds familiar and in not a good way. We're not going to regress back to Hitler days, and any candidate pushing for that isn't someone I want to be POTUS. Carson is spouting off about something he doesn't know about, and doesn't understand the ramifications if the treaties were broken. If this statement came from Trump I might be able to understand why, considering the source. But, from Carson?
(1)
Reply
(0)

Sgt Aaron Kennedy, MS
>1 y
SGT (Join to see) The second one was from Mr. Trump. The Torture comments from Dr. Carson. Both piss me off to the point of "equalness" (I can't get more pissed off). Dr. Carson has however publicly stated religion should be a considered factor for "electability," which is counter to the Constitution (Art6).

This election cycle is really scaring me. We're getting radicals that don't understand the very simple Constitution. It's four pages long. What's worse is the support of the People, who should be shouting down these radicals for even suggesting some of these concepts. That's changing my fear into outright anger. The People are the oversight for the Government... and it they aren't capable of spotting basic "wrongness" what hope do we have. Not political disagreement things, but flat out wrongness. That's what is worrying me.
(2)
Reply
(0)

SGT (Join to see)
>1 y
Sgt Aaron Kennedy, MS, What worries me is voters voting for anyone, no matter their qualifications, just to put someone in they think will counter the mistakes Obama has made. I really don't like any of the candidates. I just can't imagine Trump or Clinton running our country. One is egotistical, the other one is a liar. I hate what's going on. For my first time, I'm extremely worried about the future of our country.
(2)
Reply
(0)

LT (Join to see)
Posted >1 y ago
There's just that small detail where it doesn't work and erodes our standing in the international community while bolstering the terrorists' claims about our willingness to disregard our own morals and treaties. But, yeah, sure, let's do it for the sake of enjoying the enemy's suffering. There's nothing "PC" about not torturing people (I honestly think Conservatives don't actually know what that term means) when it's been proven to yield unreliable information.
(1)
Comment
(0)
Show More Comments
Read This Next
RallyPoint Home