Centralized promotion boards fair or not? 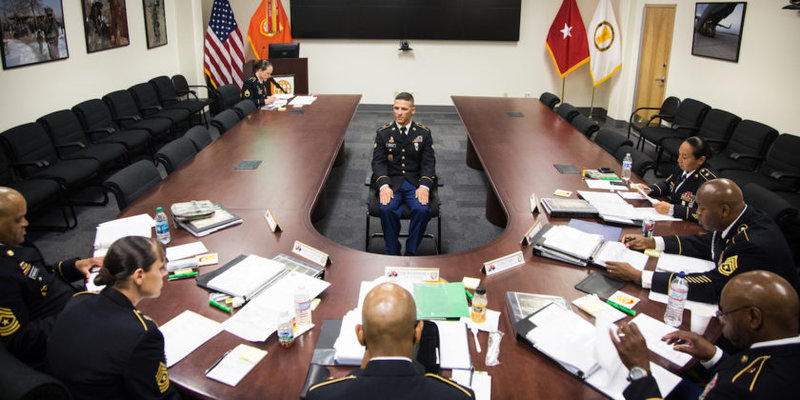 My question to the population of servicemen and women is simply this. Are centralized promotion boards fair or not? Maybe? I have an opinion having sat on a board and wish to know the field and it's opinion before I step out there and create some food for thought.
Posted in these groups:

Promotion Board
Posted 9 y ago
Responses: 27

SSG Roger Ayscue
Posted >1 y ago
NO they are not. The only ones that know why a Soldier does not get promoted are the ones that did not promote him. These people read a few pages of a record and look at a photo.

My records were destroyed in a flood in Korea in 1998. When I asked if they had copies, I was told by some personnel weeney that I was supposed to keep my own records and why did I not. My answer was simple, I had all my copies in a file cabinet in my barracks room, Mr PAC Man said "Great", to which I replied that my barracks room was under the same 10 feet of water that S-1 had been under.

Further, I feel that DA keeps the records secret because they do not want to open the door to class action lawsuits from White male NCOs who are now and have been discriminated against for decades. Never has a promotion list been recalled for too few White Males. When a Command Sergeant Major, who is not white, suggests to the NCO's in his regiment, during NCODP, to look and see if there is any Native American or other minority group in his family because it will improve his chances with the DA centralized board, well Damn, there Zippy what does that tell you.
I think that the board should be REQUIRED to spell out exactly what an NCO is lacking in order to get promoted. These Senior Enlisted Leaders should be held to the same standard that Company and Battalion NCOs are held to...Counsel your Soldiers as to why, they specifically by name did not get promoted, and if you can not justify not promoting them, they get it.
(23)
Comment
(0)
show previous comments

SSG Roger Ayscue
2 y
SFC Don Ward - Yeah, Like I can't stand the term "Battle Buddy" and then the slang shortening of it to "My Battle"
There has to be something that does not sound like it refers to a Kindergarten class.
"My Battle Buddy" there has to be a better term...I can't see the Marines saying that...Air Force has "Wingman" which is cool. Navy, well I guess to them it is shipmate....I guess we could go with "Squad Mate" that sounds better than "Battle Buddy"...
(0)
Reply
(0)

SFC Don Ward
2 y
SSG Roger Ayscue - I dislike the term "Battle Buddy" as well, especially when used by Senior NCO's. You are right in saying it sounds too kindergartener.
(0)
Reply
(0)

1SG (Join to see)
Posted >1 y ago
Chief I would say they are fair but I have a good understanding of how they work. I have had the opportunity to actuallly sit down with a CSM that had sat on a promotion board. He walked me through the whole process of the board from the time a member gets selected to be on the board until the time he gets back to his duty station. I think if more NCOs knew all the details that I know, they could be better prepared, and would understand that the board is a fair process. I have designed a class using my personal records as a template as well as the knowledge I gained from that CSM. I do my best to educate every NCO that I come in contact with.
(9)
Comment
(0)
show previous comments

SGT Jon Creager
4 y
1sg Gilley, there you go playing hide the quarter, where did it go. Yea its there, no its there. What you get with centralized board is a lot of people promoted who are not good soldier nor do they know what a soldier is.

They happen to be ass kissers, brown nosers or whatever you want to call them. Sure some really good ones are selected. but I have seen a lot of poor ones promoted because of race.

Many times I have seen soldiers who did a ton of community work, Get passed by for the ones that hang out and spend their time drinking with the others.

The centralized board will never see the real person. The one that really cares.
(0)
Reply
(0)

SGT Jon Creager
4 y
Allow me to put this another way. Like a registered animal, let us say a horse. They may have great breeding lines and look good. but you cannot ride a set of papers. or a hunting dog, looks great is pictures, has a line of breeding but cannot hunt.
A lot of service personnel look good on paper but in the real world they are piss poor soldiers!
(0)
Reply
(0)

SSG Roger Ayscue
4 y
You know 1SG, it would be a helluva lot easier if the Board results were RELEASED with the scores.....that way we could be sure that there were no shenanigans....Because, unless it has changed in the 13 years since I retired, I would not trust the DA centralized Board to run my mail room, much less be fair and unbiased. That might explain why the (Not a White Male) Staff Sergeant in my last battalion came out on the SFC list a mere 60 days after his SECOND DUI, ON POST no less......EO Program "Goals" are Quotas that are different from Quotas only by location in Webster's.
(0)
Reply
(0)

SFC Don Ward
2 y
Had an engineer CSM here at FLW call a post wide NCOLD after the board. He explained the centralized process, including the "Affirmative Action" portion of sending a list back for re-look if it didn't contain enough minorities and females for promotion. His general expression of the system - "Stand a chair against the wall. Throw the records at the chair. Those that land on the chair and stay get promoted. Those that fall off of the chair, don't." Heard that as an E-5 and have remembered it for over 30 years.
(0)
Reply
(0)

SFC Douglas Eshenbaugh
Edited >1 y ago
Posted >1 y ago
Any system that relies on the subjective evaluation of many to make an objective decision by a few is flawed at the heart.&nbsp; <br>
(8)
Comment
(0)
show previous comments

SGT Jon Creager
4 y
The was a time when the Army had SQT testing. In the end it was a simple test. I saw so many so called great soldiers fail it but they were pretty in formation.
(1)
Reply
(0)