How do you feel about veterans or Soldiers criticizing our President? 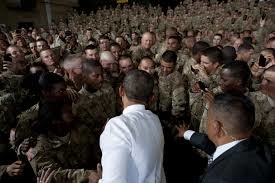 Recently I've been hearing countless remarks, and seeing posts from soldiers and veterans alike. Down talking our commander in chief. How do you feel about this? Should this be allowed within our ranks? Does freedom of speech really play a part?<br><br>
Posted in these groups:

SFC (Join to see)
Posted >1 y ago
Name-calling or bashing anyone on social media is tasteless and unprofessional, whether you are an Officer, a Warrant Officer, an NCO, Junior Enlisted, or Civilian. I supported both of our Presidents in all four of the terms they have
served since I put on this uniform and it chagrins me to see my peers
trash either one of them. HOWEVER, the questioning of judgement or motives of those appointed over Enlisted military members is their prerogative, and if we move to a place where there is no freedom of speech on social media platforms, we will quickly become fascist.<br>
(103)
Comment
(0)
show previous comments

SPC Martin Meyer
3 mo
As a veteran I feel I have earned the right to use my right to Free Speech. I did not always agree with who was president when I was in the service but they were my Commander in Chief as long as they do not issue an unlawful order I would obey their direction. If as a citizen of this great country I feel things are moving in the wrong direction I have not only the right but the obligation to speak out.
(22)
Reply
(0)

PVT Ted Rodosovich
2 mo
I would "bash" argumentally, but not migrate bashing over to completely haranguing. Gotta be some debatable merit within the context, IMO.
(2)
Reply
(0)

Lt Col Warren Domke
2 mo
I am now retired, but served as an Air National Guardsman, an active Air Force officer and an Air Force Reservist fora total of 31 years. I served under Presidents from Eisenhower to George H. W. Bush. Most Presidents were worthy of respect as men as well as elected officials, but there were some I respected less than others. Presidents do not assume some sort of divinity upon being sworn into office and--as human beings--are subject to the same flaws as the rest of us human beings. I believe we are allowed to (privately) disagree with them and to (privately) criticize them as appropriate. If a President--or any official--breaks the law or violate the Constitution we almost are obligated to disagree in whatever manner might be suitable or legal. As a retiree I do not consider myself restricted from disagreement or criticism of a President or other official who violates the trust this nation has placed on them. We are intelligent people and are not prohibited from using good judgment and from standing for what we consider right and correct, but we are prohibited from breaking laws. And I believe we MUST disagree when necessary. May God give us the wisdom to know when that is.
(3)
Reply
(0)

CW2 Joseph Evans
Posted >1 y ago
The checks and balances are in place. Unless impeached, he is the Commander In Chief. Promoting propaganda that is contrary to good order and discipline can lead to a Court Martial. <br>Don't do it, don't tolerate those who do. Especially from a superior that refuses to have his authority questioned... Because that is just being a hypocrite.<br>In the meantime, exercise your right to vote, refuse to follow illegal orders and defend the Constitution.<br>
(82)
Comment
(0)
show previous comments

SPC Perry Gresham
3 mo
Because you can't always have it both ways. not with politicians like the clinton duo and their 1998 Telecommunications Act. (As if the folks down at AOL/Time-Warner and Viacom didn't owe the Democrats for that Robbery). Or Obama and his Gang (his Czars) Raping the housing market and everything else they could, even his own damn vacant senate seat. By the way, the constitution doesn't afford for a President to side step its laws by appointing his or her own czars, he can only suggest folks. the legislator decides who's in charge.
Look I'm not telling you not to respect the chain of command but for the sake of apple pie and the fourth of July, please don't just blindly go wherever they tell you to go. The true law of the nation needs to be followed by its heros above all else.
(2)
Reply
(0)

TSgt (Join to see)
1 mo
I only talk bad about presidents that lie, rape, and steal and lead insurrections!
(0)
Reply
(1)

</font><font color="#000000" face="Calibri" size="3">In June 1775, the Continental Congress adopted this
provision and slightly modified the language to make it applicable to the
Continental Army during the RevolutionaryWar. In 1776, Congress amended the
provision to prohibit the use of traitorous or disrespectful words against the
United States Congress or any state legislature in which a soldier or officer
may be quartered. The provision was modified again in 1806 to preclude the
President and Vice President from being treated as objects of disrespect. The
provision remained unchanged until Congress incorporated it into Article 88 of
the UCMJ in 1950.</font></p><p><font color="#000000" face="Times New Roman" size="3">

Cpl Daiji Yoshimura
5 mo
Forgive me if I am wrong but the article 88 you referenced only applies to "commissioned officers". Obviously an enlisted person could be charged with many other articles if they disparage/disrespect their superiors directly or even indirectly. Just wanted to point that out.

Honestly I don't think the provision was meant to censor what the troops in the barracks are saying amongst their peers, because if that was the case then the majority of the ranks would be open to UCMJ punishment.

Article 88 is to prevent personal opinions like Lt. Stuart Colonel Scheller and his public statements about the Afghanistan war. While I agree with his sentiments, I disagree with him doing so publicly. If our military officers and NCOs weren't bound by this, then our while military establishment would devolve into mini warlords which is the problem with Afghanistan.
(1)
Reply
(0)

SPC Perry Gresham
3 mo
CSM Stuart C. O'Black - If you were keeping your oath you would be defending the Constitution of the United States and I promise you with some of these corrupt politicians and their Amendments, all active duty should rethink which side of the Government they are defending. Corrupt and or illegitimate perverters of what our founding fathers intended. Or the Constitution as it was meant to be.
What will you say when it is common knowledge and proven fact by law that the 2020 election was perverted by politicians (Russia gate) and bad actors (Mark Zuckerberg)? where was your oath when Twitter banned our sitting president from speaking to the people of this Country. What were you saying then CSM O'Black?
(4)
Reply
(0)