What to do with the Kurds? 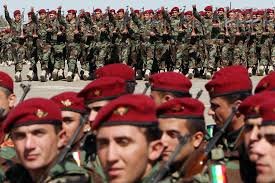 The Kurds are willing to fight ISIS but need funds for salaries and equipping. The British were notorious for extending their reach of the military and capabilities through allied soldiers. On the other hand the Kurds want an independent country they have always longed for, for which nobody is granting. What are your thoughts?
Posted in these groups:

LTC (Join to see)
Posted >1 y ago
The Kurds were left to hang since the end of WW1. We evacuated many to Guam and other places of the USA 30 years ago and they were there when we invaded Iraq. Turkey and the USA need to get along better with them and they will not go away. Sure there are some factions that need to be controlled and stop bombing but we were able to do this with the factions in El Salvador and I am sure we can work things out with them. You can go to Kurdiastan now and there is no sectarian violence in the Kurd held areas and Christians can live in Peace there too. We should arm them!
(4)
Comment
(0)

CPT Joseph K Murdock
>1 y
I concur with them that they need to be armed. The are very principled, and there is an underdog them to them which I want to see culminate into victory.
(1)
Reply
(0)

Col Joseph Lenertz
>1 y
Arm them yes, and support them through a diplomatic process to establish an independent Kurdistan within Iraq. Negotiate an agreement that allows Kurds In Turkey to move to Kurdistan and links Kurdish peaceful behavior within Turkey to American and Turkish support. Most Sunni and Shia and all Christians within Kurdistan would choose to stay due to the better security and lower corruption than neighboring Iraq or Syria. Kurdistan has the potential to be peaceful.
(0)
Reply
(0)

PO1 William "Chip" Nagel
Posted >1 y ago
Tough, Great People and as MAJ Stephen Conway has stated "Left to Hang out to Dry" by History. Their Neighbors want to use and abuse them and fear their Independence but they are the Dominant Faith in the area where Turkey, Syria, Iran, Iraq meet. I think they should have their own country but that is not my decision to make.
(3)
Comment
(0)

Lawrence of Arabia is a magnificent British film made in 1962. Directed by David Lean and produced by Sam Spiegel and Michael Wilson, with the screenplay by ...

The scene that reminds me of Arabs as a sterotype of bickering was the scene of Lawrence of Arabia walking out of meeting in Damascus because the victors could not agree on much. It was like that when I was my BNO LNO and my S3 AND XO went to the Kirkuk City Council meetings in 2005 and I recall them saying they did not have quorum nor did they agree on much between the Kurds, Arabs, Turkomen and others when they did have quorum.
https://www.youtube.com/watch?v=1jM0hRiX5xc
(0)
Reply
(0)

MSG (Join to see)
Posted >1 y ago
My experience in Iraq has led me to understand that the Kurds are the only people as a hole there willing to fight and if need be die for a country of their own. Further, I believe, that whichever Iraqi general or militia leader comes out on top will eventually become the next Saddam.

Most Iraqis I met were too concerned about their individual clans and local disputes to really feel a part of something called Iraq. Iraq reminds me of the U.S. prior to the Civil War when one was a Virginian, New Yorker, etc. before he/she was an American.

Few Americans will ever truly appreciate George Washington's greatest act he ever performed in service to this country which was to peacefully yield executive authority to the next duly elected POTUS as mandated by our Constitution.
(2)
Comment
(0)

CPT Joseph K Murdock
>1 y
I agree with your assessment the only group worth a damn at fighting are the kurds. I love your analogy of pre-civil war atmosphere.
(3)
Reply
(0)
Show More Comments
Read This Next
RallyPoint Home