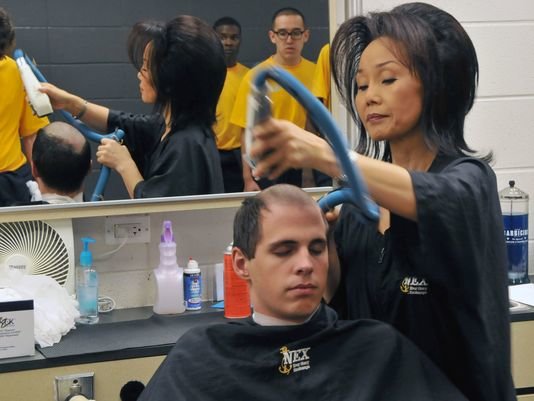 For men, getting their head shaved on the first day of Navy boot camp has been a rite of passage for decades.

Women are also required to get first-day haircuts to ensure their hair is trimmed to regulation length, equal to the uniform collar.

But the days of these old traditions could be numbered.

Women taking part in a three-month pilot program at Recruit Training Command Great Lakes, Illinois, and Officer Training Command Newport, Rhode Island, will not be required to get their hair shorn. A similar move is being considered for men that, if adopted, would eliminate the decades-long ritual.

The first pilot program will test new rules for women, according to Naval Service Training Command.

Instead of requiring women in boot camp to have their hair cut to the lower edge of the uniform collar, they would only be required to choose a hairstyle that meets Navy uniform regulations, according to the Jan. 8 NSTC release.

But if they still want the traditional haircut — they can request that, too.

"We are constantly considering fleet feedback and policy changes to improve training and quality of life during initial accession and indoctrination into the Navy," said Rear Adm. Rich Brown, commander of NSTC, in the release.

Female recruits aren't allowed to wear their hair longer or pinned up. As a result, NSTC said, female sailors and officers are not taught proper grooming standards, which would allow them to have longer hair when they reach the fleet

The pilot comes months after a high-profile case in which the Navy booted a mid-career sailor who refused to shear off her locks. Hospital Corpsman 2nd Class (SW/AW) Jessica Sims said she had worn this coiled, natural hairstyle, popular with black women, for the majority of her 12 years in uniform; her new bosses at RTC Great Lakes said the hairstyle violated regs. One of the lessons officials took from the controversy was that female hair regs are neither well-understood nor enforced in the fleet.

The pilot will bring the Navy in line with the other services, none of which require women to get their hair cut as part of recruit training.

"NSTC is considering a similar pilot program change regarding male recruits, following the pilot of the new female haircut program," according to the release.

Men have their heads shaved to one-eighth of an inch when entering training at Great Lakes, Newport and the Naval Academy — a ritual for decades.

They, too, could end up only being required to get a haircut that puts them inside the Navy's grooming standards. After the initial head shaving, all follow-on male haircuts during recruit or basic officer training are only required only to meet the service's grooming standards, a measure that ensures they graduate with regulation haircuts.

Final approval hasn't come for a male hair pilot program, and no schedule has been set, officials say.

When asked if recruits could opt to have their head shaved to the current 1/8-inch standard upon arrival, Comer replied: "Trimming hair to an 1/8-inch would certainly fall within those standards."

PO3 Brendan "Smitty" Smith
Posted >1 y ago
Belay that order! The whole point of boot camp is to break you down so that everyone is the same. You're a recruit. Nothing more, nothing less. Then it is the job of the RDCs to mold you into a sailor. One of the most integral and symbolic parts of that process is the shaving of recruits heads.

I have had enough with the Department of the Navy pissing on our traditions and pandering to the week of heart. Keep shaving heads, and get rid of the bloody stress card.
(49)
Comment
(0)
show previous comments

PO2 Mark Saffell
6 y
Boot Camp is already easier than when I went. We had 9 weeks instead of the 7 they have now in Orlando in the heat. Everyone that went to Orlando can recall those days they gave us shots and then marched us on the grinder in the heat until you felt like you would die. Now days all the whinners would be calling there congress to complain and cry.
(0)
Reply
(0)

PO3 Brendan "Smitty" Smith
1 y
SGT Steven Eugene Kuhn MBA - Sorry, I never replied to this. I would say that Navy boot camp is all a mind game. From the moment you get there, to the moment you leave. Thankfully, I had a good recruiter who prepared me for it. He told me, "Don't speak, unless spoken too. Don't be a shitbag, but don't do so well you get noticed. It's a long fall when you do screw up. Do what you're told, when you're told, exactly how you're told. Nothing less. Nothing more. If at the end of boot camp your RDC asks, "Who the fuck are you?" Just look him the eye, shake his hand and say, "Thank you very much, Chief."
(1)
Reply
(0)

CSM David Heidke
Posted >1 y ago
Well, it is the Navy... It's a wonder boot camp isn't optional...

SFC (Join to see)
6 y
Oh wow so let's throw away all the damn standards....next thing they'll be getting rid of uniforms Smdh
(1)
Reply
(0)

Sgt Packy Flickinger
Posted >1 y ago
I think head shaving should be mandatory for ALL new recruits regardless of branch or gender.
Equality.

I also think the lady in the pic giving haircuts needs one herself.
(27)
Comment
(0)
show previous comments

PO3 (Join to see)
>1 y
I got my haircut by this woman twice. She's awful. She is notorious for cutting your heading. She really digs in. As far as females shaving their head, that's just dumb. We should be teaching these women how to be strong women in the military. Especially how to hold themselves and proper military grooming. Instead the Navy throws them in boot camp cut's their hair and doesn't teach them how to be women in the military.
(0)
Reply
(0)

LTC Paul Labrador
>1 y
Bingo Sgt Packy Flickinger. Women want to be treated equally as men....well then let's treat them equally. No more female standards for anything. That would include grooming, physical fitness, billeting, etc.
(3)
Reply
(0)

PO3 Amie Welden
>1 y
I would have been more than happy to shave my head. Beats that stupid looking hack job.
(1)
Reply
(0)

Sgt Packy Flickinger
>1 y
Believe it or not, they did that shaving our heads. We had to go back and finish it with a razor.
(0)
Reply
(0)
Show More Comments
Read This Next
RallyPoint Home