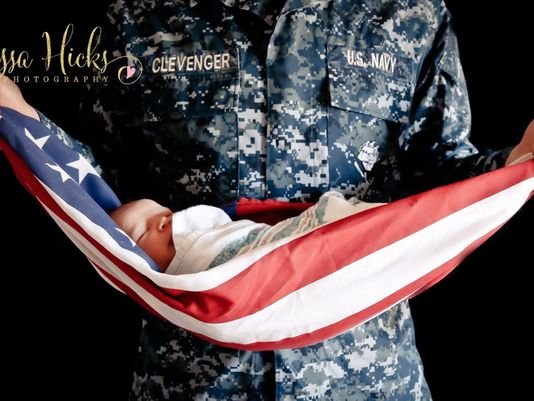 A Navy veteran turned professional photographer said she is proud of a controversial photo in which a newborn is cradled in a flag held by his active-duty father, and would take the photo again if asked.

"Never in my wildest dreams did I imagine that this would happen from a simple family photo shoot," Vanessa Hicks told Navy Times in a March 12 phone interview. "But I would be proud to take another photo like that."

Hicks, 29, initially took a lot of heat online after posting her photo of 8-day old Landon Clevenger, held in the American flag by his Navy father, a photo that within days was featured on Fox News and ABC's Good Morning America.

Though this particular concept is not new, a Facebook community business page titled "You Call Yourself A Photographer?" accompanied a post of the image with pointed criticism regarding its use of the flag.

But many more rallied to the sailor and photographer's defense.

The sailor pictured, Rodney Clevenger, was contacted by Navy Times, but sent word through the Joint Expeditionary Base Little Creek-Fort Story, Virginia, public affairs office that he did not wish to comment. He posted the shot as his Facebook profile picture on March 11.

The U.S. Flag Code dictates that "[n]o disrespect should be shown to the flag of the United States of America." Among the specific examples offered, the flag should never:

Touch anything beneath it, such as the ground, the floor, water or merchandise.
Be used as apparel, bedding or drapery.
Be fastened, displayed, used or stored in such a manner as to permit it to be easily torn, soiled or damaged in any way.
Be used as a receptacle for receiving, holding, carrying or delivering anything.
Criticism of the photo was soon met by messages of support. Many called the photo everything from "beautiful" and "patriotic," and described the baby as "wrapped in freedom." Others pointed out holes in the application of Flag Code, which also forbids the flag be printed on paper napkins, boxes or anything that is designed for temporary use and discarded — items that are very common on national holidays and military events. The code also forbids the flag to be used on advertisements or athletic uniforms.

"I took a stand by not taking the picture down as this group wanted me to do because I did not feel I was disrespecting our flag in any way," Hicks said. "Service members, veterans and their families saw the photo, saw the intent behind, and respect it. They have shown overwhelming support. And I think the group that first threatened me now realize they messed with the wrong group."

Hicks said she had received more than 1,100 similar Facebook messages, phone calls and emails within 48 hours of the photo going viral. She has since been inundated with interview requests from national and international news agencies. And business is picking up: Some in the Virginia Beach, Virginia, area have booked the photographer as a show of support. When anyone does so, Hicks said she will donate 15 percent of the proceeds to the USO.


The photographer is a veteran and married to a sailor. She joined the Navy in 2003 at the age of 17, and served as a quartermaster aboard the carrier Enterprise during its support of Operation Enduring Freedom.

"Some of the best times of my life were on that ship," she said. "I grew up on that ship. I am the person I am today because of my shipmates and mentors." 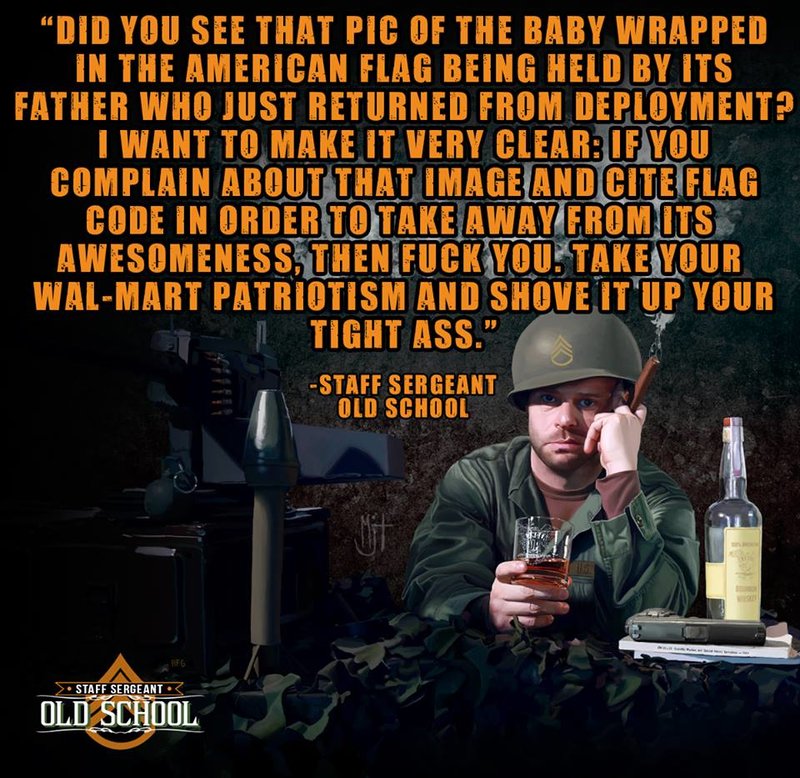 SFC (Join to see)
>1 y
This SSG understands Flag etiquette quite well, in fact I was on the phone with Mortuary Affairs just this morning dealing with an etiquette issue but I will save my outrage for the outrageous.
(0)
Reply
(0)

SFC Robert Wheeler
6 y
SSG Gilbreath, I totally agree with your attitude. I have seen more Walmart patriotism than I care to think about. If somebody is going to get all butt-hurt over that photo, it tells me they probably have their priorities wrong.
(0)
Reply
(0)

SGT (Join to see)
6 y
^^^^ This... I support this!
How could we blame an innocent and beautiful picture of a newborn american resting on the flag, when we blindly accept Old Navy selling those tacky polos for 4th of july that is covering fatbodies?
(0)
Reply
(0)

SSG Byron Hewett
2 mo
AMEN BROTHER! Having an Honor Guard background this is not to be quoting regulations at this is to be treasured and appreciated by all Freedom loving Americans anybody else that thinks other wise pack your bags and go to another country which would like those kind of negative opinions. THAT A GREAT PICTURE!!!!!>80)
(0)
Reply
(0)

SGT (Join to see)
Posted >1 y ago
Seeing a baby wrapped/draped in the American flag is American, it represents protection of our children by the principles of freedom and liberty.

CPT Zachary Brooks
>1 y
That's what I thought. Why is this controversial?
(2)
Reply
(0)

Sgt Aaron Kennedy, MS
>1 y
CPT Zachary Brooks It's in violation of the Flag Code. We are military members tend to get "militant" about things and forget that Symbols can be used in Symbology.
(1)
Reply
(0)

Here I thought that this was about those same people that threw a hissy fit because a veteran wanted to hang a flag in his home. The flag is a symbol and as long as it is treated with respect, it is ok to me. Now when they start turning it into clothing...
(1)
Reply
(0)

Sgt Aaron Kennedy, MS
>1 y
CPT Zachary Brooks I fall under your side of things. I thought it was tastefully done, and symbolic. I understand the complaints, though disagree with them.
(1)
Reply
(0)

1SG David Niles
Posted >1 y ago
This is no different then an Olympic athlete draping themselves in the flag all sweaty after they won the gold medal. I take that back this is more appropriate because this is a new US citizen swaddled in the symbol of our great nation. The problem with things like this is people are two fracken sensitive for the wrong reason. Rant almost over
(20)
Comment
(0)

Cpl Jeff N.
>1 y
Athletes should not be doing that with the flag either. There are lot's of things done with the flag by people mostly out of ignorance.
(0)
Reply
(0)

SFC Robert Wheeler
6 y
Cpl Neely-outside the military, people can do what ever they want with the flag. It's called the First Amendment of the Constitution of the United States. You don't get to make them follow any rules. All you can do is like it or not like it. Most of us served to protect that right.
(1)
Reply
(0)