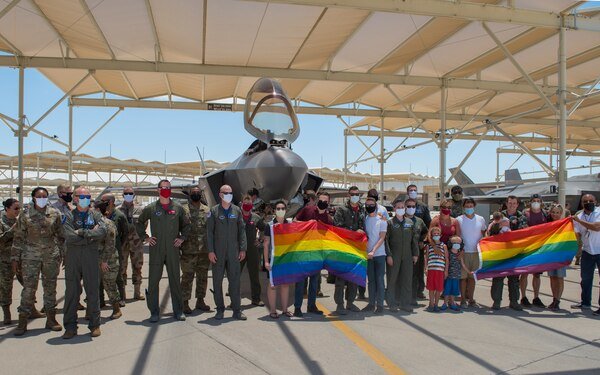 PRIDE Month may have ended in June, but I reflect on the incredible gift that occurred five years ago.
Five years ago, the Secretary of Defense Ash Carter stepped to the podium and announced open service for transgender individuals. I cried. Big crocodile tears. I was so overwhelmed with the breakthrough of freedom at that moment.


In an instant, I no longer had to hide. I no longer had to fear who might find out my secret. To whom can I trust this? What about my kids and might they inadvertently say something innocently to a friend, and in that innocence, end my career? When I was investigated for my security clearance, the investigator and I danced around whether or not I would reveal this (at the time) career-ending information in order to be honest. I did and waited with fear, apprehension, and uncertainty. As it turned out, in that case, my fears were unfounded - yes, the investigation had sussed out my secret, but to answer whether I could be blackmailed with that secret, they were satisfied that I could not.


With that announcement, everything got easy, right? Certainly! and... no. In some ways, it became more difficult. I went from one of a crowd to an example. There were standards, and then there were standards to ensure that I didn't let my transgender advocates and comrades down. That I didn't lend voice to vile rumors and lies about the capability of transgender individuals to serve their country.


I had no way to know that in just thirteen months, I and all of my fellow transgender Servicemembers would be 'fired' by my Commander-in-Chief. By Tweet. I remember how that felt in a campground deep in rural Minnesota as I learned that the fear was back. Did I have a job? Did I have a future? What awaited me when I returned from vacation?


And so that hung out there... those of us already 'out' were allowed to hang on to our jobs, while no more could come in. The message to the Force was clear - just wait, and eventually, they'll all be gone.
A few years later, I still had my job. Not everyone did, including one notable superior.


Lawsuits were filed. Policies argued. Targets felt clearly upon one's back, and in some cases, even more assuredly on one's forehead. Hatred was given permission. It became *more* of a struggle to be out in the hostility than perhaps it had been to be closeted in the first place.


Which fear is more gripping?


And then, open service was restored. First, by Executive Order 14004. That was a magnificent day. It was an amazing feeling, and Servicemembers know this, to *know* that your leadership 'has your six'. Over the ensuing months, the policies were developed, and soon, by June 2021, we were able to successfully return to where we'd started - five years previous.


In that time, I have made many more connections, grown in my personal and professional lives, and my area of influence has grown demonstrably. I've developed a new sense of mission to ensure that as my time in the military comes to an end, that those who follow behind me will have fewer issues and be more able to concentrate on the mission embedded in our oath - "to preserve, protect, and defend the Constitution of the United States."


I couldn't be prouder.


https://www.c-span.org/video/?412040-1/defense-secretary-ashton-carter-lifts-ban-transgender-service-members
Posted in these groups:

SSgt (Join to see)
Posted 1 y ago
Must respectfully disagree. I don't disrespect transgenders but many questions come to mind like if they're fit for duty-especially combat and if they are serving for the right reason. I've heard that there are people joining up to get a free sex change from the government and getting out after 3-4 years while being non-deployable almost the whole time.
Just sharing a thought not looking to start an argument. Again I say this respectfully
(46)
Comment
(0)
show previous comments

SGT Aaron Miller
2 mo
Lt Col John (Jack) Christensen, The problem is So-called Trans individuals are non deployable, so what use are they to the Military? The Military is becoming a joke, and the worst part is the WOKE OFFICERS running the Military Circus.
(4)
Reply
(0)

PO3 Edward Riddle
2 mo
SGT Aaron Miller - Finally, someone who thinks like me. Remember what that Great Man said: Liberalism is a mental disorder. It's a great book also.
(3)
Reply
(0)

SFC Lyle Green
2 mo
MAJ (Join to see) - The Royal Navy captured German U-boat U-110 on May 9, 1941, in the North Atlantic, recovering an Enigma machine, its cipher keys, and code books that allowed codebreakers to read German signal traffic during World War II. The captured Enigma decoder they captured had 3 dials of encoding encryption capabilities. Less than 6 months later, NAZI Admiral Karl Donitz felt the Enigma had been compromised, he then ordered a 4th. decoding wheel to be installed on all new enigma decoders. This rendered it impossible for the Allies to decode and the original 3-wheel enigma was worthless. The capture of the original enigma was May 9, 1941, almost 4 years before Germany Surrendered, May 8, 1945. Mr. Turing and Bletchley Park, England's decoding headquarters were never able to break the new 4-wheel enigma code. So, it was brawn, skill, weapon innovation and human ability that caused the defeat of Germany.
(2)
Reply
(0)

PFC Roland Farmer
Posted 10 mo ago
What business does the United States government, or the Armed Forces, have celebrating what God calls sexual perversion??? I am not a hater. I love people, but I do not love or tolerate the June 'celebration' of lesbianism, male sodomy, cross dressing, or any of the other alphabetically manufactured substitutes for what God established in His word. God hates pride. In fact, He said in Proverbs 16:18 that "Pride goes before destruction, and an haughty spirit before a fall." Is that what our government wants for these people? Destruction? A fall into worse sin? Our government needs to wake up and get real!!
(18)
Comment
(0)
show previous comments

PO1 Wayne Sasser
9 mo
Thanks for your response. Your thoughts and comments about what I am rady are far couldn't be further from reality, kinda like you are 1Sg.
(2)
Reply
(0)

CPL Linda B.
3 mo
Interesting that you are able to voice that and put it out there... It will be curious the Responses. At the end of the day it is not us that will judge them it is our heavenly father...
(1)
Reply
(0)

SPC David Batterson
Posted 1 y ago
I salute you, SSG Stanley. I was obviously not "out" in the Army (back in 1966-68). Nobody was. But I knew gay soldiers there, of course. Some worked in the mess hall, others in admin (like me), one was personal aide to the 2nd AD HQ commanding General, and some were career sergeants. I suspected that some commissioned officers wee secretly gay. It's better times now, and a diverse military is a more cohesive military.
(20)
Comment
(2)

Lt Col John (Jack) Christensen
4 mo
Our B-52 copilot in Vietnam was gay. Of course that had to be kept secret but it didn't keep him from being a Standardization Evaluation Instructor, ie. one of the best in the Wing.
(0)
Reply
(0)

MAJ (Join to see)
3 mo
Sir, How do you know he was gay? Is there a specific look, or mannerism? I am here to tell you that there is none. Some would swear to God or Country that a person is gay because of its voice, mannerism or way of walking, that sent to jail and got many people investigated and thrown out of the Armed Forces--what a waste of human resources.....
(1)
Reply
(0)