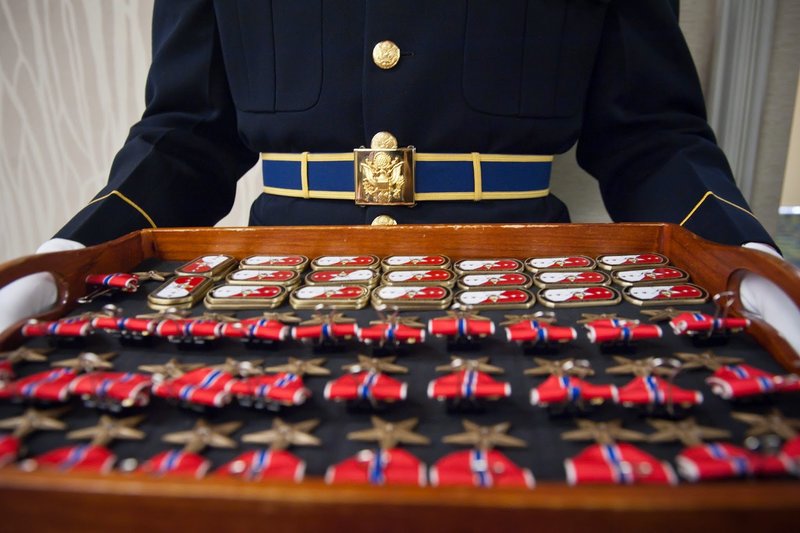 There are many awards that the military bestows on their service members but none hold more disdain than the Bronze Star. You will find resentment among the ranks for young officers in staff who receive this award while other soldiers are fighting on the front in the Global War on Terror. We often ask how this could happen, but it is not quite that simple.

The Bronze Star Medal was authorized in 1944 by President Roosevelt. There was no “V” device at the time of inception. The concept of the medal came from GEN George Marshall with the intent of awarding it to those who fought on the ground, particularly the infantry. He wrote that the infantry “lead miserable lives of extreme discomfort and are the ones who must close in personal combat with the enemy.” This led to the Bronze Star Medal being awarded, retroactively back to 1941, 395,380 times during WWII according to the Army Institute of Heraldry. The Bronze Star Medal was also awarded to any soldier with a Combat Infantry Badge or a Combat Medic Badge. It didn’t necessarily tie a single act or achievement beyond serving as an infantryman who fought during the war, thus making it a service award.

Moving to other wars after WWII, we saw 30,359 BSMs being awarded in Korea. At that time, the Army did not appear to track how many were awarded with valor. The first war to track the “V” device separately was Vietnam with 170,626 BSMs with valor and 549,343 for Achievement/Service. Now Operation Iraqi Freedom, from 2003 to 2010, saw 99,886 Bronze Star Medals awarded in OIF for Achievement/Service. In addition to those, there were only 2,459 awarded for valor.

As we can see the Bronze Star Medal was not originally intended for a single act of heroism but for service in the while serving as an infantrymen in combat. Today that award has expanded to include all branches of the Army. If a logistics officer served in Iraq, he may be eligible for the BSM. It is counted among the highest honors one can obtain for service. With a very small quantity of Bronze Star Medals being awarded solely for a heroic act, one should not automatically assume that it is unjustifiably being awarded to soldiers that were not involved in direct action.
Posted in these groups: 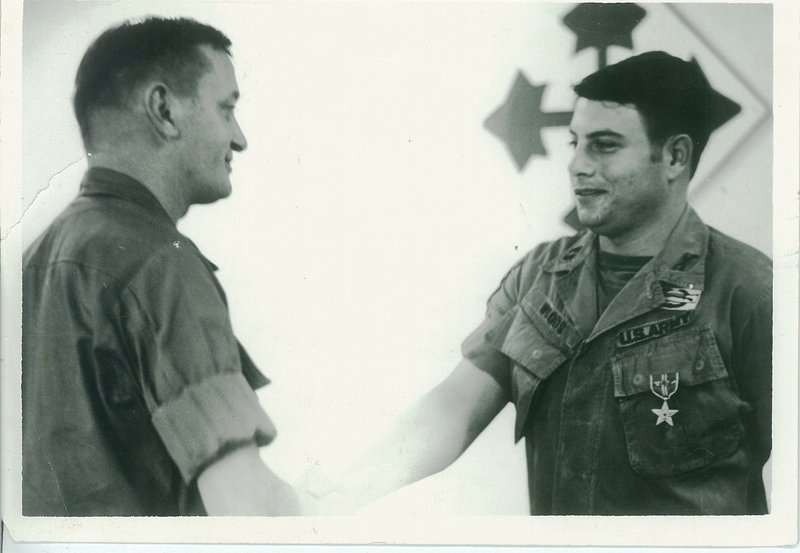 SGT Lorenzo Nieto
>1 y
SGT Joseph Rutigliano - funny you say that I spend nine months in Vietnam before I went in a army hospital never got nothing if that is true how would I find out if I was eligible?
(0)
Reply
(0)

CH (LTC) Jim Howard
Posted 8 y ago
I was in the Army long enough to get all of the basic medals including the Bronze Star Medal. I don't think medals mean that much but I was by one of my dad's friend's grave yesterday who was a Company Commander from Normandy all the way through the defeat of Germany and its occupation. On the simple brass plaque it said Captain, US Army, World War II and Bronze Star Medal. A simple understated testimony to the fact that at one point in his life, he did a good job. Soon the grass will obscure all of the letters on this simple plaque. Few will know how good a man he really was. In the end, it matters more what is in your chest than what is on it and the people who's lives we touch.
(120)
Comment
(0)
show previous comments

SrA Jared Hall
>1 y
I SSG Trevor. The last sentence says it best. I was Air Force Security Forces in Iraq attached to an Infantry unit and as an A1C was put in for an ARCOM but because I was an A1C it was downgraded so as not to make the NCOs look bad. It’s not a huge deal but I know I earned it. It’s what in the chest, not on it. I know what it means to me.
(2)
Reply
(0)

SSG Bill McCoy
>1 y
SGM Joe Young - As an MP, I never wore my awards after SP4. It was my opinion that the SGT and SSG stripes got more respect from young soldiers - ESPECIALLY during peacetime service - than ribbons. Even as a SP4 I only wore them while in Khakis/TW's while the dress greens had service and combat service bars.
I was told pretty recently, by a SP4 MP from our last duty station that he was especially impressed that I was the only NCO who did NOT wear ribbons. Besides, ribbons were just something a suspect could try to grab onto - for the same reason, I NEVER (ever) wore the Sam Browne "suicide strap," and ONLY clip-on ties! LOL
(0)
Reply
(0)

COL Jason Smallfield, PMP, CFM, CM
Posted 8 y ago
Great laydown and history of the BSM but I would like to add a few points:
- It is arguable which award holds the most disdain among Soldiers. BSM is high but may not be the highestest. Other possibly high disdain awards are any of the "breathing" medals awarded by time (NDSM National Defense Service Medal), location (KDSM Korean Defense Service medal), event (HSM Humanitarian Service Medal), or campaign medals (ACMCS, ICMSC). A close second are the service ribbons (Overseas Service Ribbon, Army Service Ribbon). Collectively these awards/ribbons make Soldiers look like WWII Soviet Generals.
- There are a limited number of military awards with only broad definitions for guidance that give a wide amount of latitude to local commanders. The good news is local commanders are given a "band" to operate within but the bad news is that the "shot group" used by the commanders can vary widely.
- The above means there is a consistent effort to add more awards to the military awards. Recent examples include a retirement medal and the medal for UAV pilots that was to have been placed above the BSM in precedence (neither was implemented) along with the CAB which was implemented.
- Why an award was initiated and how it is used now usually differ. Therefore the historical awareness is informative but less useful than one would think. Look at how the Purple Heart and Congressional Medal of Honor have morphed over the years. Change itself is not necessarily a bad thing.
- Rank and responsibility. Many Soldiers (and leaders) equate rank with eligibility for award. By AR this is not true but in application there is some truth to this. For peacetime PCS awards (AAM, ARCOM, MSM, etc) I agree that scope of responsibility should be a criteria of consideration for an award. For combat awards (BSM, SS, etc), however, the act alone and not the rank should be the primary consideration.
- The solution to the award problem (as noted above by the BSM) is not to add more awards but to enable a tighter "shot" group by local commanders when they approve awards at the designated levels.
(116)
Comment
(0)
show previous comments

SSG Bill McCoy
>1 y
Good post COL Jason Smallfield, PMP, CFM, CM. I ETS's in Dec of '78 and a soldier, sailor or Marine was considered to have a lot of ribbons with two or three rows. NO OFFENSE intended towards any USAF guys, but back then we always looked at AF guys as getting a ribbon for everything but eating in a mess hall. It wasn't uncommon to see an AF E4 with five or six rows of ribbons.
Today, it looks like soldiers get a ribbon for just about anything and everything - completing training like WLC, and who knows, maybe even brushing their teeth and having a haircut! LOL Reminds me of kids I see in high school Jr. ROTC.
(0)
Reply
(0)

SSG (Join to see)
5 mo
COL Jason Smallfield, PMP, CFM, CM While I appreciate your POV sir, I must respectfully disagree. I have been in for over 12 years and quite frankly, I'm lucky to have the 9 ribbons I currently do. I can't speak for everyone, but I know for a fact a lot of Soldiers have disdain for awards because an officer and an enlisted person could do the exact same thing, but be given completely different awards. For example, I saw a 2LT get an AAM for running a weapons qualification range for 1 day. Likewise, the SSG who ran it the following day received nothing. AR 600-8-22 states "Rank/Grade will not be a factor in determining the type or level of recognition, nor will any quotas be established limiting the number of awards that may be recommended or approved." However, with that in mind, if you are SSG or below, you'll be lucky to see anything above an AAM. SFC and Above, you'll rarely see anything less than an ARCOM. I got my first AAM for getting 9 Soldiers into the reserves out of the IRR, but they only wanted me to get 5. My second AAM was for being an Acting Platoon Sergeant for 4+ months due to a shortage of NCOs while I was a Specialist. The award system is broken sir. Officers are the approval authority for awards, and they give each other attaboys constantly, while the joes that are doing the majority of the work get their award recommendations downgraded or disapproved. I look forward to hearing your thoughts sir.
(0)
Reply
(0)

SPC John Reynolds
3 mo
E4 here, agreeing that an O-4s' greater responsibility should factor into consideration of medals. Think about this, though: should not *even greater* weight be given to those who, with far fewer means / responsibilities, nonetheless achieve similar accomplishments?
(0)
Reply
(0)
Show More Comments
Read This Next
RallyPoint Home