Suicide Awareness Month: What We Can All Do To Make A Difference 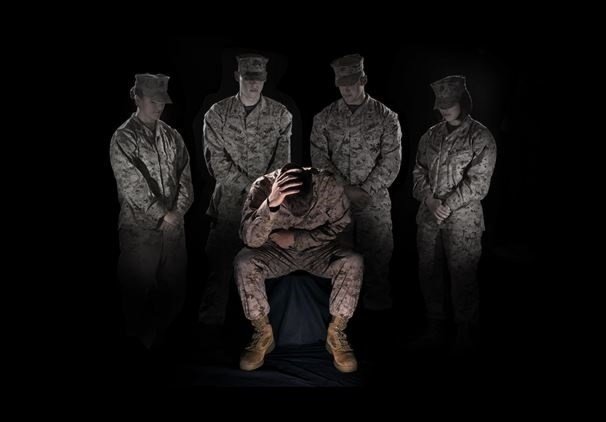 As the stigma surrounding mental health continues to lessen, more of an emphasis has been placed on suicide prevention and as a result a number of programs have emerged to varying degrees of success. But the fact remains that even with a wider array of prevention programs coupled with the allocation of $222 million by Congress to the VA to prevent suicide in the past decade, there are still 20 veteran suicides each day.

In my opinion, no program has been as far-reaching or all-encompassing as the recent President’s Roadmap to Empower Veterans and End a National Tragedy of Suicide (PREVENTS) task force in the effort to prevent suicide, of which I serve as an advisor for alongside a number of esteemed peers. The PREVENTS task force established a definitive roadmap which specifically outlines a multitude of unambiguous steps that all Americans can take to prevent suicide. Suicide is a national public health problem that in turn requires a national approach to dealing with.

The recommendations put forth by the PREVENTS task force cover a variety of topics and a lot of ground but in particular, I want to focus on what an approach looks like from the local level so that everyday Americans understand how they can participate and contribute to the prevention of suicide.

There are a number of states that have suicide prevention councils but a similar structure can be used to create councils that are specific to your community and the needs of your community’s citizens and veterans. Towns and cities across the country have put such councils in place composed of veterans, health care professionals, and faith and political leaders. This is a great resource to train the broader community about suicide and mental health, as well as coordinate outreach events, awareness campaigns and develop partnerships with local businesses and residents.

Having suicide prevention councils and other community specific organizations in place serve as sources for veterans to build a connection with their community which is paramount to maintaining good mental health. According to research conducted by the Robert Wood Johnson Foundation, if individuals feel comfortable with their surroundings and feel a sense of belonging they are more likely to place a greater emphasis on maintaining overall health.

Suicide prevention councils can coordinate with local businesses and area employers about best practices for all employees, but particularly veterans, when it comes to preventing suicide. It is so much more than posting a suicide prevention poster in a shop window or making sure that employees have access to a suicide prevention hotline should they need it. Employers should be educated on the signs and symptoms of suicide and - this is the part that is often overlooked - educate their employees on these signs and symptoms as well. This has never before been more important than now as we wade through the current pandemic and many individuals are stressed about keeping their job, sending their children back to school and staying healthy so that they can continue to provide for their families.

I would also note that it is not only important for employers and companies to provide access to mental health care if they are able, but that it can be beneficial to also provide information about emergency services, religious leaders, veteran organizations, AA and substance abuse meetings and the nearest VA’s suicide prevention coordinator, to make a difference for employees who feel that they need access to additional services outside of traditional health care.

And, though the following strategy may not affect existing veterans, I do believe that more comprehensive mental health education can be introduced to children at a young age – either at home or especially in the classroom – as an added step to reduce the stigma surrounding mental health and provide the next generation with the tools they need to manage their experiences and emotions. We can better prepare our children to monitor and pay attention to their mental health in a way that some of us were never taught. Local teachers, religious leaders, coaches and obviously parents can lead the way by taking simple steps, such as asking if a child is okay, truly meaning it and expecting an honest response back. Sometimes it is the little things that make the biggest difference.

I believe that the actions and steps we take on the local level are paramount to preventing suicide and I encourage anyone who is interested to learn more about initiatives and steps in your city or state. Additionally, the PREVENTS’ national public health campaign, REACH, is based on the idea that combatting veteran suicide is not just something that we all must do, but something we all must do together, by reaching out to one another and letting the people we care about know that they are not alone. I want to encourage everyone to head to https://www.wearewithinreach.net/pledge/ to learn more about REACH and take the PREVENTS pledge to reach today.
Posted in these groups:

SGT Robert Pryor
Edited 30 d ago
Posted 30 d ago
Chris Meek wrote, "According to research conducted by the Robert Wood Johnson Foundation, if individuals feel comfortable with their surroundings and feel a sense of belonging they are more likely to place a greater emphasis on maintaining overall health."
These are hollow words when Rally Point allows cyber-bullying by admin, rather than addressing issues in a helpful way. VA sends veterans to this site to deal with PTSD, depression, stress management and other issues because of the camaraderie that the VA financially supports this site to provide. When administrator SSG (Join to see) was told of the harm his actions are doing to veterans his response showed me disregard for the important subject brought up by this thread. When experts in various fields explain how he is wrong, he takes a defensive attitude, instead of apologizing for his egregious errors and learning from his mistakes. Obviously RP admin needs some training in the area of suicide prevention. Any member of admin who continues to harm veterans through their cyber-bullying should immediately resign their position, and perhaps even be permanently barred from Rally Point as a step towards suicide prevention. But NO, from my seat in the peanut gallery it appears rather than removing offending members, they stick together to perpetuate the problem. To demonstrate this, I am tagging members of admin. That way you can see if they jump in to defend or justify the behaviors of Dickhoff, rather than removing a festering sore from this site. I suggest that listed members of admin that refuse to police admin itself, should also resign and be replaced by individuals that more accurately reflect the make-up of the RP Community -- such as gender, branch of service, active duty, civilians, military retirees and other veterans. Remove those members of admin that have their names listed but do nothing at all and replace them with qualified individuals with advance degrees that put them in position to help with suicide prevention, such as SPC Nancy Greene, rather than exacerbating the problem.
LTC Kevin B. SGT Ben Keen SFC James J. Palmer IV aka "JP4" LTC (Join to see) SPC Elijah J. Henry, MBA CSM David Heidke CPT Laurie D. CMSgt Mark Schubert SrA Edward Vong SFC (Join to see) PO3 Bob McCord SMSgt Lawrence McCarter
(11)
Comment
(0)
show previous comments 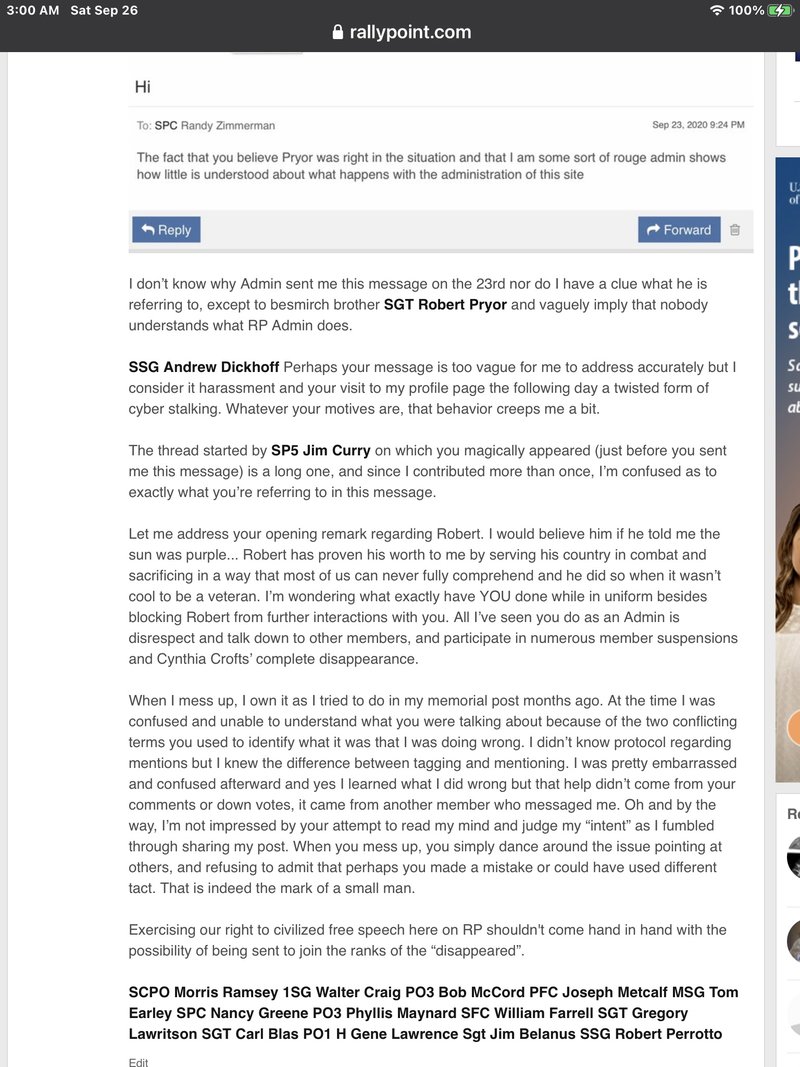 SFC (Join to see) - You are one of most conscientious members of admin and one of my go-to sources on all things active duty related. So my post was certainly a not a shot at you. It was a cry for help. If there were more members of admin like you, SFC James J. Palmer IV aka "JP4" and a couple of others, this problem wouldn't exist. Attached is a screen shot showing an example of what is happening. Also, a major thread that was trashed can be seen at the below link. Take particular note of how paid professionals in the field of law enforcement, psychology and veterans affairs pointed out the harm SSG (Join to see)'s actions and comments were doing. Yet he has refused to make a public apology, remove his silly downvotes that appear to be contrary to the purpose of downvotes. I know I have to be quicker at taking screen shots because some offending posts by admin have been altered after the harm was done or suddenly disappeared entirely. Fortunately, many members are now taking screen shots or making other records of the demonstrated callous disregard for veterans and service members experiencing PTSD and showing signs of depression and/or suicidal ideations. Members such has Cynthia Croft, Walter Craig and PO3 Phyllis Maynard, and perhaps others, have been suspended from this sight for confronting certain members of admin over the harm they are doing to the most vulnerable veterans. Perhaps they were technically suspended for offensive language or things perceived to be threatening, but if that was they case, you have to ask yourself if they may have lost their composure over their frustrations with Rally Point's failure to correct this problem. When it comes to suicide prevention, Rally Point's guiding principle should be: "Primum non nocere," which means "first, do no harm."
https://www.rallypoint.com/status-updates/6040219

https://www.polkcounty.org/vets/above/above.html ABOVE AND BEYOND... ... | RallyPoint

SGT Robert Pryor
30 d
PO3 Bob McCord - Lovin' it! Hey, you have my email address. We won't let a third party's incompetence come between us. You and I will continue the fight to protect veterans from the scourge of suicide and depression, even when others demonstrate a total disregard for this just cause.
(3)
Reply
(0)

SPC Nancy Greene
Posted 30 d ago
Chris Meek, I commend you for providing this information and definitely agree with increasing awareness and education. I would also add the connection between PTSD and suicide is a pertinent point in this discussion. In addition, cyber bullying can be more detrimental in some cases...I think SGT Robert Pryor, PO3 Bob McCord, SP5 Jim Curry, PO3 Phyllis Maynard, SPC Randy Zimmerman, and many others might have comments on this topic.
(8)
Comment
(0)
show previous comments

PO3 Bob McCord
29 d
SPC Nancy Greene - I think it eventually did for most of us. But it took a lot of time and not being very nice to a lot of people for a few years.
(2)
Reply
(0)

MAJ (Join to see)
29 d
It is truly amazing how many RP members who have different opinions will respond in a caustic manner. I come here for the camaraderie and good banter. Those without the requisite decorum, I just don't have time for and would rather just block them.
(2)
Reply
(0)

SPC Margaret Higgins
Edited 30 d ago
Posted 30 d ago
I have responded in kind before; one death is one death too many.
Chris Meek
The phone number for the National Suicide Prevention Lifeline is the following: [login to see] .
Please, kindly, press the Number One (1) for: Active Duty troops; and, for Veterans.
(7)
Comment
(0)
Show More Comments
Read This Next
RallyPoint Home