When, Not If, Will We See Open Transgender Military Service? 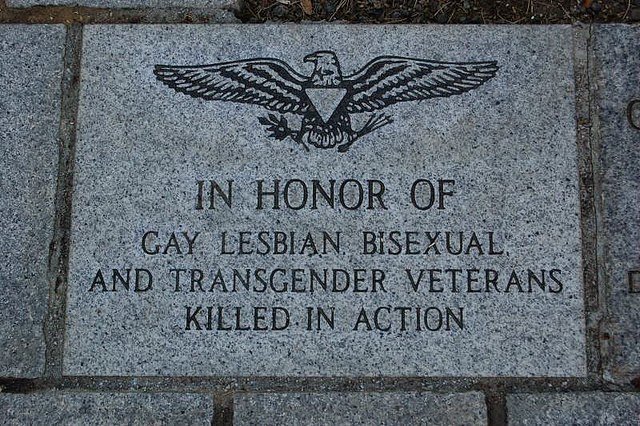 On November 23, 2014, the Palm Center released a statement entitled "Military Services Have Failed To Comply With New Defense Department Rules On Transgender Personnel."

Military Times covered release of this latest report by the Palm Center. "A change to a Pentagon personnel policy three months ago loosens the rules barring transgender troops from serving in the U.S. military," stated the Army and Navy Times in their article entitled Report: Loophole could allow transgender troops to serve under new DoD policy, "giving the individual services leeway to retain these personnel." The article further stated, "The update -- to Defense Department Instruction 1332.18, Disability Evaluation System -- provides a loophole for the services to let transgender troops serve instead of requiring administrative separation, the Palm Center says."

The same socially conservative religious organizations that argued against repeal of Don't Ask, Don't Tell (DADT) such as the Center for Military Readiness, the Center for Security Policy, and the Family Research Council, are using almost identical arguments. In the end, those arguments didn't work and DADT was repealed.

DADT was a federal law passed in 1993 that barred lesbian, gay, and bisexual (LGB) service members from serving openly in the military services, and the law needed repeal before LGB service members could serve openly in recent years. All that bars transgender people from serving openly now is the DoD and individual service regulations. And, it appears that the overarching DoD regulation was weakened last August so that the four DoD military services could change their rules now to allow open transgender service.

So with that in mind, do you agree it's a question of "when" and not "if"? And if you agree it's a "when," how soon do you believe we'll see open transgender military service?
Posted in these groups:

LTC (Join to see)
>1 y
SSG Guy G. - You were talking about your diabetes but it almost sounds like its a metaphor for those obsessed with sex change like the topic here. Have confidence in yourself. It runs in the family so it is not your fault.
(1)
Reply
(0)

LTC (Join to see)
>1 y
I have a 19 year old transgender step-daughter. She wants to be called Jayden not Zoe. She use to be a good soccer player before she came out. Her obsession with her gender change made her drop out of school after the 9th grade. She goofed off in school, skipped classes, She quit sports, started drinking and smoking and taking drugs like pot and more and staying up all night and sleeping all day due to her body being messed up too. She had gone to rehab before but her obsessed girlfriend threatened to leave her so she did not finish. She is lazy. If this is one type of transgender that has coping issues with themselves, even I they were sober but confused, then they will not pass basic training and they will be a threat to the unit cohesion and be a problem child for the unit. I may appear biased but I have to say no to giving her money for drugs since she chose to be stupid by choice/not by accident and runs away with her FAS lesbian girl friend who is just as messed up as she is and a lazy smoker too.
(0)
Reply
(0)

Schroer was an Airborne Ranger qualified Special Forces officer who completed over 450 parachute jumps, received numerous decorations including the Defense Superior Service Medal, and was hand-picked to head up a classified national security operation. She began taking steps to transition from male to female shortly after retiring as a Colonel after 25 years of distinguished service in the Army.

MAJ Hugh Blanchard
>1 y
I have no issue so long as qualification standards are not compromised. Lowering our high standards will get people killed, so we don't want to do that.
Regards, Hugh
(1)
Reply
(0)

Sgt Alex Bane
Posted >1 y ago
I thought that veterans preferred to be recognized, because of their heroic actions not because of their sexual preference or identity. I personally do not care about a persons sex life, but if you must remind me over and over then I guess is all that I will remember about you. I assuming the argument is rater or not taxpayer money should be spent on sex change operations for service members. Is it basic and essential to military efficiency or is it a cosmetic operation.
(66)
Comment
(0)
show previous comments

SSgt (Join to see)
>1 y
My wife couldn't get Tricare to cover a mouth guard for TMJ (lock jaw) but service members should be allowed a Tricare paid for elective gender reassignment surgery?

There are some very skewed priorities being put out here. When did medical niceties start to outweigh medical necessities?

Something else that is very skewed... Since when does genital reconstruction surgery of COMBAT wounded service members and veterans even compare to elective gender reassignment. I really don't care where you fall in this debate, the FACT is, they are not equal and should NEVER be correlated to each other. It is disingenuous and offensive.

I have absolutely ZERO problem with ANYONE's choice to be whom they want to be or be with whom they choose to be. If you are female and want to be a male, that is your choice and the military/government should recognize your choice. However, that choice does NOT afford you special rights or privileges. If you want a gender change, YOU should pay for it and no one else.
(2)
Reply
(0)

CPT Pedro Meza
7 y
So how did the dialogue change from transgenders serving to transgender sex organ change operations. Also you gents do know that there is one open serving transgender soldier, research ARMY SGT Shane Ortega, stared life as a female deployed to Iraq twice as a woman and deployed once as a man to Afghanistan; granted the paperwork still say women, but there are steps to change that. As to who paid for the surgery that is his business because he deployed twice to Iraq as a Marine, he earned it and non of you non Marine's have a say so.
(2)
Reply
(0)

Cpl (Join to see)
7 y
Just to be the devils advocate, if a service member identifies as a transgender, Kick that Bi**H out of the military. We don't have room, time or any F**Ks for that thing. And yes once you lose your balls you are now an IT.
(1)
Reply
(0)

LTC (Join to see)
>1 y
SSgt (Join to see) - and those that find the money or sponsor to go though with the surgery be forewarned....if you aspire to go from female to male, you will be tested on the male Pt standards and most likely score lower or fail if you always lacked upper body strength and the same goes for the men who do the Bruce Jenner, you will have an unfair advantage on the pushups and the 2 mile run. I doubt the VA or the military will pay for the 'sex change'
(0)
Reply
(0)

2d Lt (Join to see)
Posted >1 y ago
If you want to be a man, be one. If you want to be a woman, then go ahead. Its not my business to have a say in what you want to do with the one body you were given. But the government shouldn't have to deal with 'wants'. I'm not trying to say that transgenders are less human, but I simply don't understand how everyone is expected to see this as a necessary surgery.

If being transgender gets in the way of your duties then you should't be in the military.
(44)
Comment
(0)
show previous comments

Just pointing out the obvious, once again! From the episode "Turnabout Intruder" Here's another thing that makes this scene even slashier: Vulcans show affec...

Star trek of 1969, the last episode of the 3rd season (final episode) recorded the obsessed female who always wanted to be a starship Captain, to the point where She hijacks CPT Kirk's body and did the involuntary gender reassignment with unintended consequences...https://www.youtube.com/watch?v=j1VaWIbyqmE
(0)
Reply
(0)

Everyone always says he's such a ladies man. But really...have we looked at the how he views his own sex once in a while? ;) From the season 1 episode "Tomor...

transgender video from Star trek above and a spoof of Kirk here that is funny...
https://www.youtube.com/watch?v=Nps1U_5fXYU
(0)
Reply
(0)