Abortion rights might soon be gone. Activists worry same-sex marriage is next

PO1 William "Chip" Nagel
777
21
6
8
8
0
https://www.npr.org/2022/06/02/ [login to see] /abortion-rights-roe-wade-same-sex-marriage-obergefell-leaked-supreme-court
On June 26th, 2015, the Supreme Court ruled that same-sex couples have a constitutional right to marriage. It was a historic ruling that signified a turning point for LGBTQ+ rights in the United States.

Fast-forward seven years, and a lot has changed. The Supreme Court is vastly different, and another landmark decision is pending, this time pertaining to the federal right to an abortion.

A leaked draft opinion suggests the court is ready to overturn Roe v. Wade, which could have implications for other rights, including the right to same-sex marriage.

Civil rights activist Jim Obergefell was the lead plaintiff in the 2015 case, and he joined All Things Considered to share his perspective on the uncertain future, and how his case is more closely tied to Roe v. Wade than you might think. 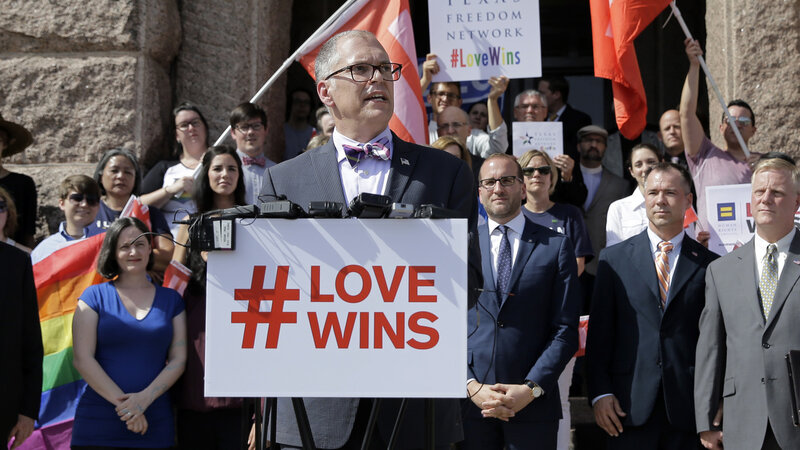 Abortion rights might soon be gone. Activists worry same-sex marriage is next

1SG (Join to see)
Posted 8 mo ago
That fact that people don't understand that a zygote isn't a person worries me. Bodily autonomy is at risk for everyone.
(4)
Comment
(0)

Also - if Roe is overturned than the right to privacy is not guaranteed. So there goes all the other things passed because of that concept AND if it's not specifically in the Constitution. Like same sex marriage, interracial marriage, etc, etc.
(3)
Reply
(0)

SGT (Join to see)
Posted 8 mo ago
PO1 William "Chip" Nagel
..."On the story behind his original lawsuit

On June 26 2013, the Supreme Court struck down the Defense of Marriage Act in their decision in The United States v. Windsor. I proposed to my partner John, and he was dying of ALS. We were in our twentieth year together as a couple. We ended up marrying inside a medical jet in Maryland, and we lived in Ohio. When we learned that John's death certificate would be filled out incorrectly when he died, saying he was single, we decided to sue the state of Ohio and the city of Cincinnati to demand recognition of our lawful out-of-state marriage on John's death certificate at the time he died. That's the case that took me all the way to the Supreme Court."...
(1)
Comment
(0)
Read This Next
RallyPoint Home