Asylum seekers have flooded into Canada. The government is putting them to work.

LTC (Join to see)
2.41K
39
24
10
10
0
Taco Bell on used to have this slogan 'Run for the Border' or 'border lights LOL'. Now the Run for the border is to the north of the USA to Quebec Canada. Many are finding temporary employment while they await their hearings to verify if they can stay in Canada. 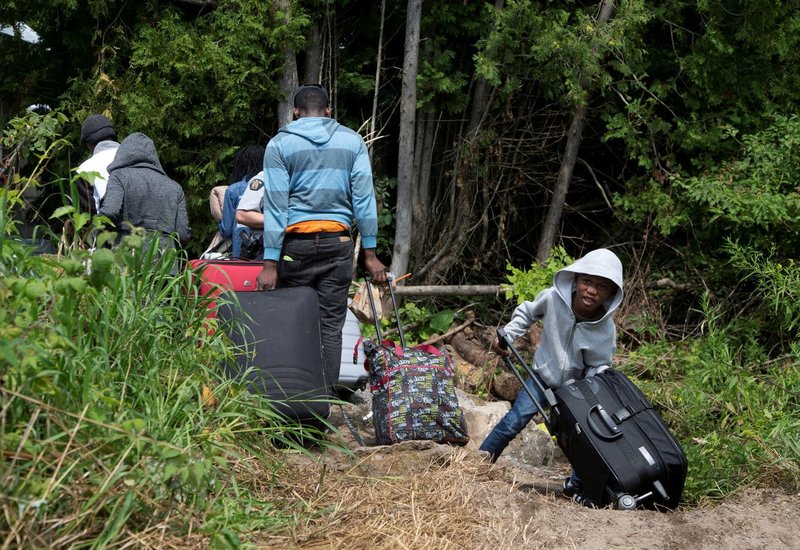 Asylum seekers have flooded into Canada. The government is putting them to work.

MAJ James Woods
Posted 3 y ago
Well moving north of the border and getting jobs as they wait for asylum or temp. residency status. Means more jobs for American citizens here in the US, right?
(5)
Comment
(0)
show previous comments

MAJ James Woods
3 y
LTC (Join to see) - How's that? Unclear on how refugees and migrants heading to Canada benefits African Americans over any other segment of the population.
(3)
Reply
(0)

LTC (Join to see)
3 y
This is from the liberal Los Angeles Times and I'm sure a lot of Democrats are unhappy about this but I think that's why many African Americans voted for President Trump even though they don't like him but because they want to take a chance with his model of bringing jobs back to Americans. I have met many very well-educated African American NCOs and Officers here at this exercise in Canada. Only a small segment of African-Americans will benefit from getting rid of undocumented workers but that still benefits some people who would have lost out to the undocumented. Illegal aliens allow for lower wages and exploitation by employers.
SMSgt Dr. G. A. Thomas SFC (Join to see) SFC James J. Palmer IV aka "JP4" MAJ James Woods CW3 Dylan E. Raymond, PHR Col (Join to see) COL Mikel J. Burroughs LTC Stephen C. LTC Stephen F. 1LT (Join to see) PO1 William "Chip" Nagel

Liberals say immigration enforcement is racist, but the group most likely to benefit from it is...

Liberal immigration enforcement might help Democrats win new voters, but it also harms and disenfranchises their most loyal constituency.

MAJ James Woods
3 y
LTC (Join to see) - Well that's great if young Black Americans are now getting jobs at fair wages like the example of $14/hour. However, it's rather insulting to see an article presuming the Trump immigration policies benefits young Black men; what about young White men? Isn't it the rural White America that supported Trump overwhelmingly that complained about illegal and legal immigrants taking jobs? It's not Black folks in urban cities getting on TV claiming immigrants are taking their jobs; nope, those folks are mostly claiming the better paying jobs are being kept from them out of racial profiling and discrimination. An issue that still has some truth but not to the degree that existed since the 1950s.
As immigrants leave the agricultural industry, don't expect young Black Americans to rush and fill those farm and ranch jobs at low wages and non-existent benefits, not to mention the environment isn't always racial friendly depending on what part of the country. I'm sure Hispanic Americans are excited about the opportunity and that justifies the segment of their population that voted Trump.
Bottomline, if Trump Admin increasing rhetoric that's scaring refugees and illegals out of the country leads to companies/businesses actually having to pay wages American workers deserve then that is good news. Oh and calling it Liberal LA Times doesn't mean it won't have any unbiased writers or pro Trump writers working for the paper.
(2)
Reply
(0)

SFC (Join to see)
Posted 3 y ago
Interesting article. I wonder if there are long term costs other than the +$2K mentioned in the article. I wish our family north of the border well.
(3)
Comment
(0)

Roxham Road, where Quebec and N.Y. state meet, is the busiest illegal border crossing. It's a one way-route out of the U.S. that the Canadian government can'...

LTC (Join to see) the difference is, just like liquid President Trump is trying to do, if you go through a normal checkpoint, you are okay. If you are found to be ineligible, you can still go back to the country you are currently residing in. Go illegally to one of those an official check points that were made by the fleeing migrants, you get arrested and you lose your residency or gas status in the USA. If you are found to be ineligible for Asylum, you get shipped back to the country you were born in. Even though the Canadian liberals and Justin Trudeau utter the word illegal alien because he considers it racist, they utter the Newspeak called irregular alien even though the sign says it is illegal to cross the border at this location. Listen to the Canadian border enforcement officer say and utter the words that Justin Trudeau and other Liberals are too afraid to speak publicly.

The US Immigration and Nationality Act, which controls asylum, specifically states that any alien inside the United States or at its border can apply for asylum. The text of the statute even specifically states that those who entered illegally are eligible. That provision exists in the Geneva Conventions, and so likely Canada has similar language in its statutes as well.

As for where an alien is returned, it depends on the process. In the US Voluntary Return or Voluntary Departure are only available if the no cost is incurred by the US government, and also is only permitted to countries the alien has a right to enter/return or through agreement between the accepting country.

When I was a Border Patrol Agent, we had two kinds of people, Mexicans and OTMs (other than Mexicans). OTMs were not eligible for VR (voluntary return) and had to be processed for deportation (removal after 1997).

Aliens in immigration court could sometimes get VD (voluntary departure), but only if they could pay their own way.

It works the same no matter the county. If a Canadian tries to illegally enter Mexico, unless he or she has a right to be in the United States Mexico is required to return them to Canada.
(2)
Reply
(0)

LTC (Join to see)
>1 y
LTC (Join to see) thank you for your expertise, I'm referring to the reciprocal agreement that the US has with a person visiting the u.s that if they illegally try to enter another country like Canada, they avoid their guest Visa. That is why I'm trying to say that the Canadian border officer was trying to warn those migrants that Crossing at this unauthorised checkpoint invalidates there temporary stay in the USA. Does that make sense? The Border officer was trying to tell them that if they went 6 km to the official checkpoint and applied there, there is no harm no foul.
(0)
Reply
(0)