Does the Army need airborne?

SFC Joe S. Davis Jr., MSM, DSL
20.8K
67
27
11
11
0
ZARAGOZA, Spain — About 1,200 soldiers from 13 countries looked up toward the thin white clouds stretching across the sky. Having just participated in a brief NATO battle demo, they awaited the November event’s finale.

First Lt. Tim Pena would later say it was “a beautiful day to jump.” But he hadn’t quite arrived just yet.

Right on time, three C-17s cleared the hills to the north, about 1,000 feet above the ground. They flew over the fictional village of “Casas Altas” — an assembly of concrete buildings where the brief staged battle had occurred. A few seconds later, soldiers who nine hours earlier had taken off from Fort Bragg, North Carolina, began to pour from each of the two rearward doors, in standard one-second intervals. Over 500 U.S. paratroopers from 2nd Brigade, 82nd Airborne Division floated to the rocky ground below — it was a beautiful sight.

The jump capped an event, designed largely for the international press, to wrap up NATO’s broader, 36,000-troop, 30-plus-country exercise known as Trident Juncture. NATO described the demonstration as a message to Russia, though Russia declined an invite.
Nevertheless, NATO and U.S. leaders were pleased. The airborne jump may have been the most visually stunning and logistically impressive element of Trident Juncture: hundreds of soldiers in the U.S. travel across the ocean and reach foreign land — on time, without an airstrip, and armed with M4s.

“It’s a great opportunity for us to show what we can do on the Global Response Force,” said Col. Joseph Ryan, the 2nd Brigade commander who jumped along with his soldiers.

The GRF, generally a rotating brigade in the 82nd Airborne Division, is the nation’s quick reaction force designed to rapidly deploy in an emergency. As the Spain exercise demonstrated, Army regards large-scale combat jumps as a crucial capability of the GRF.

But some consider this tactic to be impractical, disconnected from modern war and an unnecessary expense, if not a virtual suicide mission in a real war. Mass combat jumps have been rare since their introduction in World War II, and rarer still in the last 20 years.

“(The) current composition of the United States airborne forces appears more a product of the airborne community’s lobbying efforts in favor of their own size and autonomy than cold calculations about national interests or military requirements,” writes military scholar Marc DeVore in his 2015 Army study “When Failure Thrives.”

Should the Army continue to fund airborne?


Yes. Keep the 82nd, but five brigades are too many.


Yes, but limit only to Rangers and Green Berets.

DeVore’s study, the first product of the new Army Press, sent shockwaves through the airborne community. In 90 or so pages, DeVore argues that airborne still exists today not because of successful operations, but rather institutionalization and military culture. Even from the start airborne operations produced inconsistent results, and he said in recent decades technology advances have all but removed them from the modern battlefield, both American conflicts and beyond.

"We’ve gone 38 years with it being tough to say any given airborne operation was necessary to accomplish the overall objective of a given operation," DeVore told Army Times.

DeVore is not alone. Retired Col. Doug Macgregor has emerged as a vocal Army critic since retiring in 2004. The former 1st Squadron, 4th Cavalry commander holds a PhD in international relations and calls large-scale airborne operations an “anachronism, a thing of the past” and compared it with horse cavalry use in World War II.

Top Pentagon leaders don’t buy it. They acknowledge a major airborne combat operation is a low-probability option, but say a sizable airborne assault remains a vital capability and deterrent.

“The whole new Army operating concept is we’re back to our expeditionary concept ... the beauty of airborne forces is they were always designed to be expeditionary,” said Lt. Gen. Joe Anderson, the Army's deputy chief of staff for operations and a former XVIII Airborne Corps commander. “Typically, an enemy is not going to want to give you free access to a runway, they’re going to damage it. So how else are you going to get in there and get that stuff capable if you don’t have some light expeditionary package that is able to get in there, doesn’t need a lot of supplies?”

“It’s not an Army requirement … It’s a national security requirement,” Lt. Gen. Stephen Townsend, commander of XVIII Airborne Corps, said of robust and rapid forced-entry capacity. “This is the Army’s highest levels saying this capability is something the country needs.”

Airborne also offers training, morale, retention and recruitment perks, according to leaders. Many airborne soldiers absolutely love what they do, despite — or sometimes because of — its inherent risks.
As many generals have noted, you can’t plan for every war and the U.S. has consistently failed to predict where the next war would be fought, or what specific skills would emerge as indispensable. No one suggests jumping out of planes in general to be obsolete; Special Forces and the 75th Ranger Regiment frequently jump into enemy territory.

But does the Army need four-plus brigades — from combat troops to cooks to public affairs officers — training for low-altitude, low-speed static line jumps with ever-tightening budget restraints? (Anderson said airborne brigades costs about 10 percent more in maintenance than standard light infantry, but still roughly a third as much as an armored unit.) And given a paucity of use that spans wars and decades, what is that tactic’s true place in a modern battlefield?


In mid-August, the Army celebrated 75 years of airborne. It was on Aug. 16, 1940, when the 29th Infantry Regiment conducted its first jump at Fort Benning, Georgia. Since that day, the mission task remains simple: get soldiers and equipment safely from a speeding plane to the ground.

Over the last 15 years, the members of the 82nd have seen more than their fair share of combat in Iraq and Afghanistan — but the vast majority have never sniffed a combat jump. In fact, few large jumps into hostile territory have launched since World War II.

The Army planned to downsize the airborne 4th Brigade Combat Team, 25th Infantry Division in Alaska into a battalion task force by 2017. Milley told Congress in February, however, he wants to push back that move at least a year. If made, that cut would bring five airborne brigades down to 4 and 1/3 (three in the 82nd Airborne Division plus the 173rd Airborne Brigade in Europe).

MacGregor does not see significant tactical need for a mass combat jump of infantry forces. He says even basic air defense renders an airborne attack suicidal.“Airborne requires fixed-wing airlift. These forces cannot ‘get in under the radar’ against a major theater power’s defenses,” the unapologetically blunt West Point graduate said. “As seen repeatedly in Eastern Ukraine, anything flying low and slow, especially in the large numbers that are needed to move a militarily-useful conventional ground force, is toast in a real war.”

But leaders say the training and resources invested are worth it from a capability and deterrence standpoint, even before accounting for intangibles.

“Today the application of a large-scale airborne assault is low probability, but it’s high consequence if we’re not absolutely prepared to do it and do it right,” said Brig. Gen. Brian Winski, deputy commanding general of the 82nd Airborne Division.

At the time of the Spain jump, the 2nd Brigade of the 82nd constituted the Army’s Global Response Force before 1st Brigade rotated into the role in December. Within four days the Army can have “an operationally significant force anywhere in the world,” Winski said. Along with soldiers, the Army can drop vehicles, artillery and ammunition (but not armor) into place, allowing an array of capabilities. Since airstrips are finite and defensible, dropping near one, taking it over and possibly rebuilding after any sabotaging efforts are fundamentals of airborne training.

“Only the Army, through airborne assault joint force, can meet that kind of timeline and provide that kind of capability,” Winski said.
In addition to that “in case of emergency, break glass” capability, leaders like Winski and Ryan stress the paratrooper “spirit” or “ethos” as an additional asset. Ryan said problem-solving, ingenuity, adaptability in pressure situations, and trust inherent to the job draw a certain kind of soldier. He said he addressed that ethos to soldiers before Operation Dragon Spear, a joint entry training exercise involving 2nd Brigade’s paratroopers held near Fort Irwin, California.

“I told everybody up front: You know in the end we’ve got a great plan for this mission, and the only thing I can guarantee you is it’s not going to happen this way. So you’re going to figure it out,” Ryan said. “I think we find a significant density of the type of folks who enjoy thriving in that sort of culture, that are attracted to these sorts of organizations.”

“In theory, you’re committing suicide every time you jump out of a plane….We’re all here, because we’re not all here,” Corcoran said, pointing at his head.


Evolution of airborne
While pondering the recent invention of the hot air balloon, Benjamin Franklin reasoned in a 1784 letter to a friend that “ten thousand men descending from the clouds” could “do an infinite deal of mischief before a force could be brought together to repel them.”

Airborne was contemplated during World War I but first institutionalized as a tactic by several countries before World War II. The Germans used it in battle first, but would abandon it early on due to high casualties, particularly during the invasion of Crete in Greece. The Allies used combat jumps in the closing months of the war. 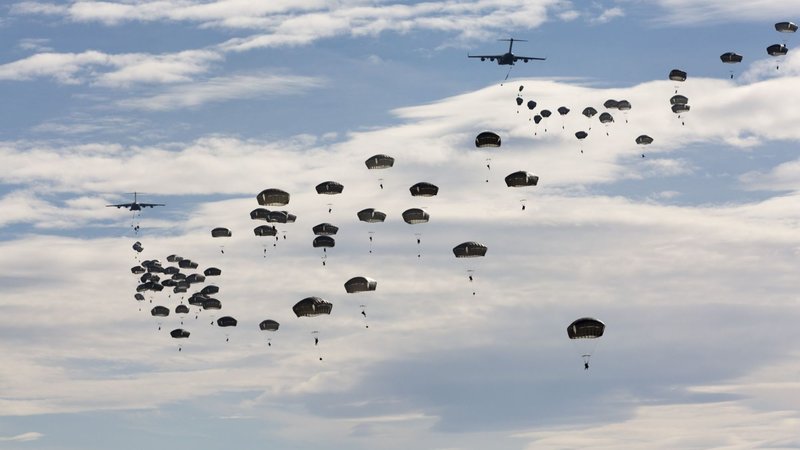 Does the Army need airborne?

SFC Joe S. Davis Jr., MSM, DSL
>1 y
SMSgt Dr. G. A. Thomas its essential to warfare and success to the nation. Just look at its past history throughout warfare in my opinion.
(3)
Reply
(0)

SMSgt Mike Wood
>1 y
Yes, You will always need "boots on the ground" and nobody gets there faster than Airborne. Cutting logistics behind enemy lines. Securing, disrupting or destroying enemy assets. Rapid mobility to "plug a hole" in the FEBA. There is so much more. Airborne is one of the military's greatest assets.
(3)
Reply
(0)

SFC James J. Palmer IV aka "JP4"
Posted >1 y ago
Fo Sho! Our Airborne units like the 82nd who is to respond globally with 18hrs have specific roles and responsibilities that makes them and other airborne units unique. I believe every facet of our Army cannot function the same without the other pieces of the puzzle.

From the Album: Run to cadence with U.S. Army Airborne Rangers, vol 2. I do not own the rights to the song/album.

SFC James J. Palmer IV aka "JP4" back in the early 1990s I used to be on DRF-1 *Division Ready Force within 1hours with the Airborne to get in and go on edree/alert. Airborne units were always rocking steady and always ready to roll.

MAJ Ken Landgren
Posted >1 y ago
There will be a time when we want to move soldiers quickly by air to conduct defensive, offensive, and blocking missions.
(6)
Comment
(0)

MAJ Ken Landgren
8 mo
SFC Joe S. Davis Jr., MSM, DSL - Airborne units can be used for flanking and seizing key terrain or infrastructure. An example is for an airborne unit dropped to seize a dam before it is destroyed by the enemy.
(0)
Reply
(0)
Show More Comments
Read This Next
RallyPoint Home