Eichmann Trial: The Trial That Taught the World About the Holocaust

After being found and captured in Argentina, Nazi leader Adolf Eichmann, known as the architect of the Final Solution, was put on trial in Israel in 1961. Eichmann was found guilty and sentenced to death. At midnight between May 31 and June 1, 1962, Eichmann was executed by hanging.

The Capture of Eichmann
At the end of World War II, Adolf Eichmann, like many top Nazi leaders, attempted to flee defeated Germany. After hiding in various locations within Europe and the Middle East, Eichmann eventually managed to escape to Argentina, where he lived for a number of years with his family under an assumed name.

In the years after World War II, Eichmann, whose name had come up numerous times during the Nuremberg Trials, had become one of the most wanted Nazi war criminals. Unfortunately, for many years, no one knew where in the world Eichmann was hiding. Then, in 1957, the Mossad (the Israeli secret service) received a tip: Eichmann may be living in Buenos Aires, Argentina.

After several years of unsuccessful searches, Mossad received another tip: Eichmann was most likely living under the name of Ricardo Klement. This time, a team of secret Mossad agents was sent to Argentina to find Eichmann. On March 21, 1960, the agents had not only found Klement, but they were also certain he was the Eichmann they had been hunting for years.

On May 11, 1960, the Mossad agents captured Eichmann while he was walking from a bus stop to his home. They then took Eichmann to a secret location until they were able to smuggle him out of Argentina nine days later.

On May 23, 1960, Israeli Prime Minister David Ben-Gurion made the surprise announcement to the Knesset (Israel's parliament) that Adolf Eichmann was under arrest in Israel and was soon to be put on trial.

The Trial of Eichmann
Adolf Eichmann's trial began on April 11, 1961, in Jerusalem, Israel. Eichmann was charged with 15 counts of crimes against the Jewish people, war crimes, crimes against humanity, and membership in a hostile organization.

Specifically, the charges accused Eichmann of being responsible for the enslavement, starvation, persecution, transportation, and murder of millions of Jews as well as the deportation of hundreds of thousands of Poles and Gypsies.

The trial was to be a showcase of the horrors of the Holocaust. Press from around the world followed the details, which helped educate the world about what really happened under the Third Reich.

As Eichmann sat behind a specially made bullet-proof glass cage, 112 witnesses told their story, in specific detail, of the horrors they experienced. This, plus 1,600 documents recording the implementation of the Final Solution, were submitted against Eichmann.

Eichmann's main line of defense was that he was just following orders and that he just played a small role in the killing process.

Three judges heard the evidence. The world waited for their decision. The court found Eichmann guilty on all 15 counts and on December 15, 1961, Eichmann was sentenced to death.

Eichmann appealed the verdict to Israel's supreme court but on May 29, 1962, his appeal was rejected. Near midnight between May 31 and June 1, 1962, Eichmann was executed by hanging. His body was then cremated and his ashes scattered at sea." 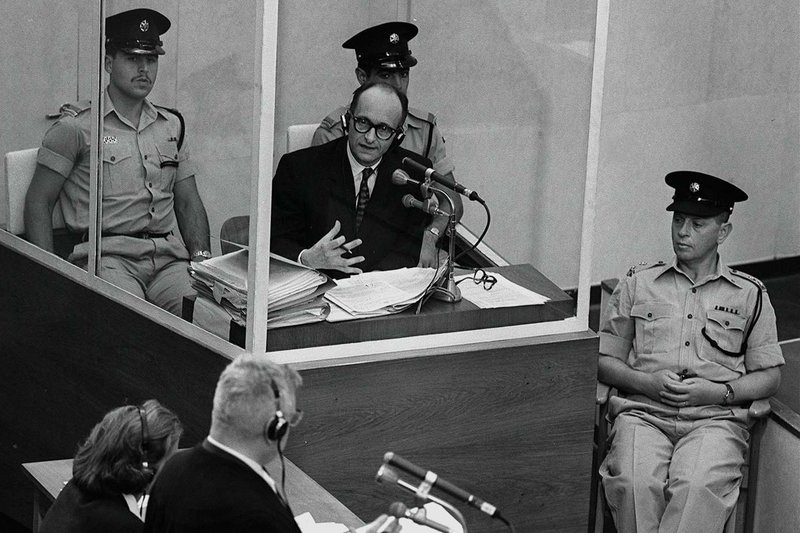 Eichmann Trial: The Trial That Taught the World About the Holocaust

PO1 H Gene Lawrence
Posted 2 y ago
Unfortunate the world does not seem to want to learn from history.
(9)
Comment
(0)

SSG Edward Tilton
Posted 2 y ago
He was not even a little sorry, he was proud. No cure for that
(5)
Comment
(0)

Lt Col John (Jack) Christensen
Posted 2 y ago
Shame that he got to live about 16 years longer than his accomplices.
(4)
Comment
(0)
Show More Comments
Read This Next
RallyPoint Home