Glaciers are shrinking fast. Scientists are rushing to figure out how fast

PO1 William "Chip" Nagel
598
39
11
12
12
0
https://www.npr.org/2022/02/08/ [login to see] /glaciers-are-shrinking-fast-scientists-are-rushing-to-figure-out-how-fast
Glaciers all over the world are shrinking more quickly than previously thought with implications for more than one billion people who rely on the ice for water, power and food, according to a trio of new climate studies.

"Mountains with glaciers on them – the Andes, the Himalayas, many others around the world – are a remarkable source for storage of water," says Paul Mayewski, a glaciologist at the University of Maine. "That stored water is around and available, particularly during the drier seasons," he says, which is extra important as climate change drives more extreme droughts.

If glaciers are smaller than previously thought, that means humanity is that much closer to a future where more than a billion people who rely on glaciers will need an alternative source of water. Rapidly melting glaciers are also dangerous, because they can also cause catastrophic floods and landslides, as happened in northern India in 2021. 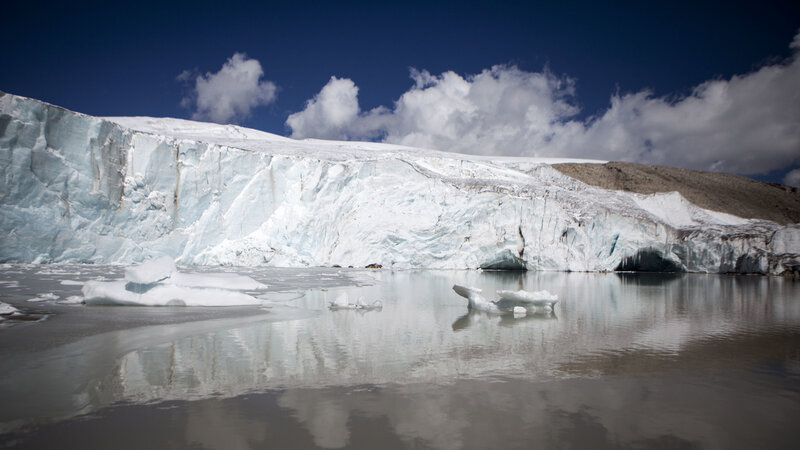 Glaciers are shrinking fast. Scientists are rushing to figure out how fast

Lt Col John (Jack) Christensen
Posted 12 mo ago
Great information but of course there are those who tell us this is just a natural cycle........I also hear they're buying up land in Kansas and Nebraska.
(6)
Comment
(0)

SGT Mary G.
12 mo
We were told in Geology classes that we are in an interstatial time - a warming trend (the Holocene - the past 11,700) during the current Ice Age. We were also told that the entire earth is has been tropical most of it's existence.
In the scheme of all things Ice Ages are short lived, within the near 5 billion years earth has been around. So if tropical earth is the norm I guess it makes sense to say we are in an interstatial time.

What determines when an ice age is past? Maybe no more ice sheets, and no more glaciers and earth is back to its norm of being tropical?

Imagine that over the course of a decade or two, the long, snowy winters of northern New England were replaced by milder winters like those in Washington, D.C., or that a sharp decrease in rainfall turned the short-grass prairie of the western Great Plains into a desert landscape similar toArizona. Changes like these obviously have important implications for humans, affecting the crops we grow, the availability of water, and our energy usage.

PO2 Marco Monsalve
Posted 12 mo ago
Good share PO1 William "Chip" Nagel Naval oceanographers have been involved in these studies for a number of years. One reason being that glacial run off impacts things like the mixing layer depth, pended sediment layers, thermocline, etc. All of these have an effect on sonar as well as "hiding" tactics for subs.
(5)
Comment
(0)

SGT Mary G.
12 mo
PO2 Marco Monsalve That is interesting.
The mixing creates changes in the temperature of the currents too the results of which "climatologist" were not take into consideration in their climate change models a decade ago. Don't know if that is still the case. Apparently there is a well-known Atlantic current that runs the length of the planet that has a huge effect on weather too.
(2)
Reply
(0)

PO2 Marco Monsalve
12 mo
SGT Mary G. - Great observation, To the best of my knowledge there is not a single ocean current that does that, however, there is what is called the "global conveyor belt", a connected system of deep and surface currents that circulate around the globe on a very long time span. These global ocean currents do play a critical role in the Earth’s climate system.
(1)
Reply
(0)

SGT (Join to see)
Posted 12 mo ago
PO1 William "Chip" Nagel
..."f glaciers are smaller than previously thought, that means humanity is that much closer to a future where more than a billion people who rely on glaciers will need an alternative source of water. Rapidly melting glaciers are also dangerous, because they can also cause catastrophic floods and landslides, as happened in northern India in 2021.

For that reason, it's important to know exactly how rapidly glaciers are disappearing. But painting a comprehensive picture of glaciers is difficult: they are mostly located in hard-to-reach places, and there are thousands of them all over the world.

"You would be surprised how little we know about mountain glaciers, even though we often rely on them for daily life," says Mathieu Morlighem, a glaciologist at Dartmouth University and an author of a study published this week that includes the most accurate portrait ever of global mountain glaciers.

Up until now, the best estimates of how much water is trapped in mountain glaciers were based on a crude method that considered surface area but not depth. That would be like assuming that the lake behind the Hoover Dam contains the same amount of water as a very shallow lake with the same footprint.

The new study uses satellite images to estimate ice depth, and finds there is about 20% less water trapped in mountain glaciers than previously thought.

That finding is backed up by recent research by scientists at the University of Ottawa. They examined satellite images of about 1,700 glaciers in the Northern Hemisphere, including in Canada, the U.S., Greenland and Russia. They found that 85% of the glaciers retreated between 2000 and 2020.

A third study, published by scientists including Mayewski and a team of mountaineers, looked specifically at one famous mountain glacier: the expanse of ice at the top of Mount Everest, known as South Col glacier. South Col is located at extraordinarily high altitude – above 26,000 feet – where temperatures do not get warm enough for ice to melt."...
(4)
Comment
(0)
Show More Comments
Read This Next
RallyPoint Home