'He Saved Hundreds': Army Chaplain Gets Medal Of Honor

It took more than 60 years, but an Army chaplain who died as a prisoner during the Korean War will be awarded the Medal of Honor by President Obama on Thursday.

Capt. Emil Kapaun was a Catholic priest serving with the 3rd Battalion, 8th Cavalry Regiment, 1st Cavalry Division who died at age 35 in 1951. And he's not only a war hero — the Catholic Church is also looking into whether he should be made a saint.

Kapaun will be honored for "extraordinary heroism" during fighting at Unsan, Korea, and after his capture by enemy troops in November 1950. The White House says:

"When Chinese Communist Forces viciously attacked friendly elements, Chaplain Kapaun calmly walked through withering enemy fire in order to provide comfort and medical aid to his comrades. When they found themselves surrounded by the enemy, the able-bodied men were ordered to evacuate. Chaplain Kapaun, fully aware of his certain capture, elected to stay behind with the wounded."

Herbert Miller, who served with Kapaun, describes in a video on The Wichita Eagle's website what happened after he was wounded at Unsan:

"They threw a grenade, and that's when I got hit. I couldn't get out of the way. Broke my ankle and I laid there in the ditch till daylight. And I saw Koreans and Chinese coming in that ditch, so I just laid down, played dead and they went on by me. ... That afternoon, I saw them coming again and I said, 'Well, this is all it.' So I was laying there and this Korean come down through ... and that Korean stood over me with a gun ready to shoot. And he stood there, he hesitated — why I don't know — but pretty quick Father Kapaun came from across the road. I didn't know what his name was ... I did know he was a chaplain. He bent, pushed that guy aside, bent down, picked me up and carried me."

Miller and other soldiers who served with Kapaun have been working for years to see him awarded the Medal of Honor, according to the Eagle, which has extensive coverage of Kapaun, a Kansas native. 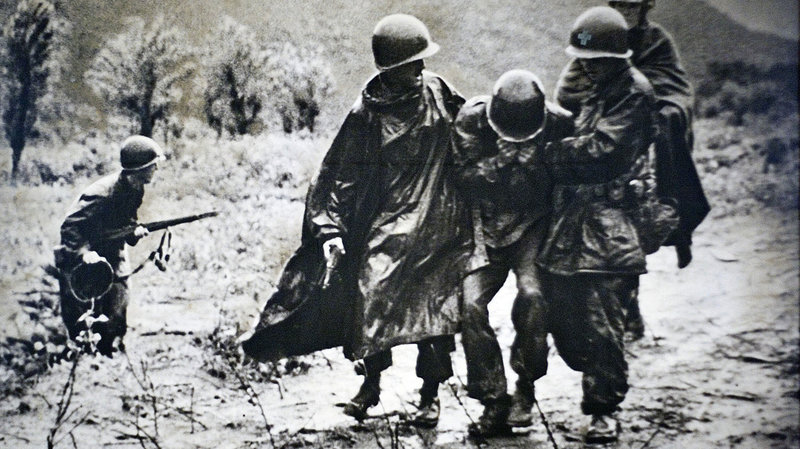 'He Saved Hundreds': Army Chaplain Gets Medal Of Honor

This is a short film about the heroic deeds of Fr. Emil Kapaun. Fr. Kapaun was a Military Chaplain who joined and ministered to the 1st Cavalry Division that...

Chaplain Kapaun's story is a profile in courage from which the Army would benefit greatly in publicizing and promoting the way in which it does so many others with respect to the 7 Army Values. That, having been said, it should also go noted that Chapalin Kapaun's story was widely and significantly published in the early years after this as this episode of the once popular television show "Crossroads" attests. Fathe Kapaun's, pray for us, our Army and the United States!
https://youtu.be/FWcLV6o6qfg
(4)
Comment
(0)

SSG Leo Bell
Posted 5 y ago
Awesome article, it's well deserved. It should not have taken this long for it to be rewarded to him. This was truly a man of God and a real soldier.
(4)
Comment
(0)

PO1 William "Chip" Nagel
Posted 5 y ago
I'm familiar with the Legend of Father Kapaun he is most definitely a Hero and should be a Saint.
(4)
Comment
(0)
Show More Comments
Read This Next
RallyPoint Home