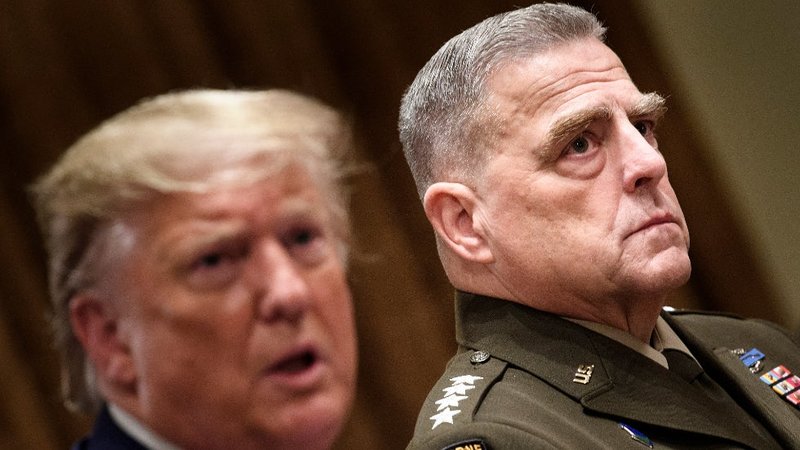 So if this book is true, you're saying that General Milley is personally responsible for the continuing existence of the species and protecting the nation from the random, meandering whims of a wildly incompetent and often needlessly antagonistic man child?

Maj Kevin "Mac" McLaughlin
4 mo
Except, no such actions were taken by Trump, and Gen Milley could have started a war himself with China had they believed Trump was unstable and that Gen Milley could do very little to stop him. The fact is, if this is true, Gen Milley does not deserve any accolades and should immediately retire or be relieved of duty.
(0)
Reply
(0)

SFC (Join to see)
4 mo
Maj Kevin "Mac" McLaughlin - You're using GEN. Milley's success as "proof" that he was wrong? Fascinating.
China was already under the impression that Trump was unstable, and had already stated so publicly, which is why they had stepped up Naval Exercises.
(0)
Reply
(0)

Maj Kevin "Mac" McLaughlin
4 mo
China has been stepping up naval exercises and activities, especially in the South China Sea, for a very long time. In fact that STILL continue to do so. I guess their worried Biden is unstable too right?

So, success of what? What did Trump do to indicate he wanted to to attack China without provocation? Better yet, how do you think Gen Milley's actions were successful in preventing a war that wasn't even about to happen? What Gen Milley may have done here is simply gross insubordination, and if he did so, he needs to resign or be fired.
(0)
Reply
(0)

LTC Joe Anderson (Taz or Joe Retired Now in Contract Compliance)
Edited 4 mo ago
Posted 4 mo ago
I've said it on other streams. Milley needs to go. For a number Reasons. Mainly because hes incompetent, not a leader, and ill informed. He also seems to have a political agenda. Our senior leader are advisors and need to remain as apolitical as possible.
(8)
Comment
(0)

LTC Joe Anderson (Taz or Joe Retired Now in Contract Compliance)
4 mo
Trump should thank Milley' political nature and dereliction of duty by not withdrawing when His Commander and Chief ordered. Had Trump executed Milley's crappy plan, then all anyone would be talking about would have been how Trump screwed up the withdrawal... Instead President Biden entrusted this bubblehead. Now he has to live with the consequences of his Joint chief of Staff having no individual thought, is not apolitical, cannot plan at the Strategic or Operational level (I'm sure he is a good tactical planner. However, Strategic and Operational planning are totally different types of planning a Flagg or General Officer must be an expert on), and he's unable to properly advises his Commander andChief.
(0)
Reply
(0)

SPC Erich Guenther
4 mo
For this? I would disagree, this is part of his job to ensure the SOP is followed and remind everyone what the SOP was regardless of who is President. I am more than confident he will do the exact same under President Biden......except Woodward won't use it to sell Biden books because he used it already for Trump. You cannot trust Woodward and Bernstein any longer, they are very shrill and both of them stretch the truth quite a bit for money.
(0)
Reply
(0)

LTC Joe Anderson (Taz or Joe Retired Now in Contract Compliance)
4 mo
SPC Erich Guenther - Milley did do the same thing under Biden. He advised this crappy plan to Biden. He would have advised Trump in the same way if he couldn't get Trump to stay in Afghanistan. Flag and General Officers at that level don't worry about SOP. Their job is to advise the president and SECDEF, as they make the tentative overall Operational Warning Order/Plan (Although Milley in the past has told Combatant Commanders they need to come to him 1st before executing missions. This isn't his role. But who's gonna tell him, "No" and expect to keep their career?) and give it to the Combatant Commanders. The Combatant Commanders then makes the Strategic plan. The Combatant Commanders issues the Warning Order, then the Order to Subordinate units. From there the Division and Brigade Commanders issue their warning order and start creating their tactical plan off of the Combatant Commanders plan. This used to be known as the Military Decision Making Process (MDMP) and is MORE detailed than my explanation. MDMP is something we practice a lot at NTC, JRTC, and CPX"s ( In my 34 years of service I've practiced creating and created these plans at all 3 levels.). The process has changed some to be streamlined and execute quicker. But this is still how orders flow. Milley failed at the Operational level. His failure and that of the Combatant Commanders caused the failure we saw on TV at the Tactical level. My comments in no way reflect positively or negatively on Woodward's book, magazine articles or this interview/post. It's strictly to say the Milley and the chain of command failed to advise the president and create a good withdrawal plan. Milley needs to step-down or be fired for this. I'm in no way shape or form excusing the Combatant Commander either. It was his Operational plan and failure we saw unfold at the tactical level on TV.
(2)
Reply
(0)

SPC Erich Guenther
4 mo
No this is part of his job and he will do the same under Biden. All he did was remind everyone what the SOP was.....perfectly normal part of his job. Woodward is blowing it out of porportion as he is clueless what is normal vs not normal and he wants to sell books so even if he did know this was milking it.....Woodward would do it for the money.
(0)
Reply
(0)

Maj Kevin "Mac" McLaughlin
4 mo
His job is not to call the Chinese and tell them he will warn them if we attack. Why does he need to remind everyone what the SOP is? An SOP which does not require operational actions on his part by the way. He is an advisor to the President. Period.

Woodward may in fact be blowing this out of proportion. We have yet to find out. But the allegations are very disturbing.
(0)
Reply
(0)
Show More Comments
Read This Next
RallyPoint Home