Col Joseph Lenertz
1.12K
52
23
12
12
0
I love Chick-fil-A! The food is great, the service is wonderful and polite, and the atmosphere is good and clean and family. The bullying tactics of city governments must not be allowed to dictate away this wonderful restaurant. 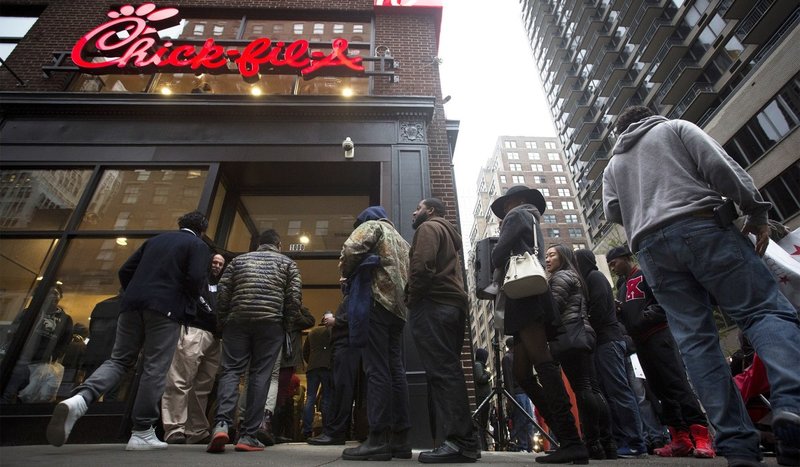 Cpl Jeff N.
Edited >1 y ago
Posted >1 y ago
Chick-fil-A has a very loyal customer base. These types of moves will not hurt them. it will only reveal the pettiness and likely unlawfulness of some of these local bodies. The state of Texas will give it a full review, New York will not. New York is run my political figures that have no issue with silencing any voice that might not support their world view.

It is an attempt to intimidate a company by denying them a license to operate legally. This should concern everyone that wants a fair and honest process for all.
(8)
Comment
(0)
show previous comments

Capt Gregory Prickett
>1 y
Cpl Jeff N. - well, first, the legal standard on marriage is that same-sex marriage is a constitutionally protected right. You know, people who still believe that blacks should be at the back of the bus or the airplane can walk through the airport and not feel at home, because their views are contrary to the law. Those who disagree are in the same position as those who promoted segregation for decades based on religious grounds. They are free to have those ideas, but the likelihood of getting a federal court to support them is slim to none.

Maj John Bell
>1 y
Capt Gregory Prickett - If understand correctly, the objection has nothing to do with how chick-fil-a operates its restaurants, or its observance of any protected class's civil rights. Individuals have every right to make their own personal decision to exact a social cost on Chick-fil-a. I'm not sure that government has a role in sanctioning a US business because government "doesn't like the legal social policies of a business.
(0)
Reply
(0)

Cpl Jeff N.
>1 y
Capt Gregory Prickett - CFA does not and has not discriminated against anyone. As far as I know there are no legitimate cases against them in that regard. This is nothing more than a hit job by leftists in San Antonio going after a business owned by Christians. You do know that religion is also a protected right or has that slipped you mind as well.

As far as the state of Texas not doing business with companies that boycott Israel, that is actually a federal issue. I am not allowed (by my company) to do business with companies that boycott Israel such as Iraq, Kuwait, Lebanon and a number of others (Arab League countries). These are issued by the Department of Commerce and the Department of Treasury of the United States, not the State of Texas. The agency’s rules do not prohibit conduct, but do impose reporting requirements on individuals and companies. Taxpayers that have cooperated with an unsanctioned boycott are denied certain tax benefits as penalty. Are you really a lawyer or just playing dress up?
(0)
Reply
(0)

Capt Gregory Prickett
>1 y
Cpl Jeff N. - First, the issue of doing business with a firm that boycotts Israel is not a federal issue, the federal government could care less. It is a state issue because of a Texas Statute, see Tex. Gov't Code section 2270.02, which prohibits state agencies and political subdivisions of the state from doing business with any entity that is boycotting Israel, such as Airbnb, Inc. There is no comparable federal law or regulation, although there is a current proposal before Congress.

Second, if you don't know the actual law a lawyer is talking about, should you really be trying to correct him? A word of friendly advice--don't, it just makes you look silly.

Finally, to the issue at hand, Chick-fil-A does not have a right to a contract to provide services at a government owned international airport. The San Antonio City Council has to approve any such contract, and the members of the council are not comfortable with signing a contract with a company that funds anti-LGBT groups, including groups that promote so-called "conversion therapy", especially after the CEO of the firm pledged in 2012 to end such funding.
(0)
Reply
(0)

MAJ Ken Landgren
Edited >1 y ago
Posted >1 y ago
My daughter worked at Chick-fil-A. She went through a week long orientation where they were taught to treat customers with superior service and other values. When they found out I was going to Iraq, they provided my whole family with a free dinner. It is a shame that others are blind to the values of the organization.
(4)
Comment
(0)

SSG Donald H "Don" Bates
Posted >1 y ago
I love Chick-Fil-A -- sad that pettiness politics is keeping them out of airports. Sick and tired of "offending someone every time I venture our or say something."
(3)
Comment
(0)

SSG Donald H "Don" Bates
>1 y
PO3 Bob McCord - I hope there is some laughter here in the US.
(0)
Reply
(0)
Show More Comments
Read This Next
RallyPoint Home