Its construction and related issues have been the source of controversies, some of which have resulted in additions to the memorial complex. The memorial consists of three separate parts: the Vietnam Veterans Memorial Wall, completed first and the best-known part of the memorial; The Three Soldiers, and the Vietnam Women's Memorial.

The main part of the memorial, which was completed in 1982, is in Constitution Gardens adjacent to the National Mall, just northeast of the Lincoln Memorial. The memorial is maintained by the U.S. National Park Service, and receives around 3 million visitors each year. The Memorial Wall was designed by American architect Maya Lin. In 2007, it was ranked tenth on the "List of America's Favorite Architecture" by the American Institute of Architects. As a National Memorial, it is listed on the National Register of Historic Places.

Memorial Wall Edit
The Memorial Wall is made up of two 246-foot-9-inch (75.21 m) long black granite walls, polished to a high finish making them appear to have a mirror effect; while etched with the names of the servicemen being honored in 144 panels of horizontal rows with regular typeface and spacing.[2][3] The walls are sunken into the ground, with the earth behind them. At the highest tip (the apex where they meet), they are 10.1 feet (3.1 m) high, and they taper to a height of 8 inches (200 mm) at their extremities. Symbolically, this is described as a "wound that is closed and healing". The stone for the 144 panels was quarried in Bangalore, India.

When a visitor looks upon the wall, his or her reflection can be seen simultaneously with the engraved names, which is meant to symbolically bring the past and present together. One wall points toward the Washington Monument, the other in the direction of the Lincoln Memorial, meeting at an angle of 125° 12′. Each wall has 72 panels, 70 listing names (numbered 1E through 70E and 70W through 1W) and two very small blank panels at the extremities. There is a pathway along the base of the Wall where visitors may walk.

The wall originally listed 57,939 names when it was dedicated in 1982;[4] however other names have since been added and as of May 2018 there were 58,320 names, including eight women. The number of names on the wall is different than the official number of U.S. Vietnam War deaths, which is 58,220 as of May 2018.[5] The names inscribed are not a complete list of those who are eligible for inclusion as some names were omitted at the request of families.[6]

Directories containing all of the names are located on nearby podiums at both ends of the monument where visitors may locate specific names.

The memorial has had some unforeseen maintenance issues. In 1984, cracks were detected in the granite and, as a result, two of the panels were temporarily removed in 1986 for study. More cracks were later discovered in 2010. There are a number of theories about the cause of the cracks, with one often forwarded being due to thermal cycling. In 1990, the Vietnam Veterans Memorial Fund purchased several blank panels to use in case any were ever destroyed, which were placed into storage at Quantico Marine Base.[7][8] Two of the blank panels were shattered by the 2011 Virginia earthquake.[9]

Inscribed in the memorial are the names of service members classified as "declared dead"; as the memorial contains names of individuals who had died due to circumstances other than killed in action, including murder, vehicle accidents, drowning, heart attack, animal attack, snake bites and others.[10] Also included are the names of those whose status is unknown, which typically means "missing in action" (MIA). The names are inscribed in Optima typeface. Information about rank, unit, and decorations is not given.

Those who are declared dead are denoted by a diamond, and those who are status unknown are denoted with a cross. When the death of one who was previously missing is confirmed, a diamond is superimposed over the cross. If the missing were to return alive, which has never occurred to date, the cross is to be circumscribed by a circle.

The earliest date of eligibility for a name to be included on the memorial is November 1, 1955, which corresponds to President Eisenhower deploying the Military Assistance Advisory Group to train the Army of the Republic of Vietnam. The last date of eligibility is May 15, 1975, which corresponds to the final day of the Mayaguez incident.[11] There are circumstances that allow for a name to be added to the memorial, but the death must be directly attributed to a wound received within the combat zone while on active duty. In such cases, the determination is made by the Department of Defense.[4] In these cases, the name is added according to the date of injury—not the date of death. The names are listed in chronological order, starting at the apex on panel 1E in July 8, 1959, moving day by day to the end of the eastern wall at panel 70E, which ended on May 25, 1968, starting again at panel 70W at the end of the western wall which completes the list for May 25, 1968, and returning to the apex at panel 1W in 1975. There are some deaths that predate July 8, 1959 including the death of Richard B. Fitzgibbon Jr. in 1956.

The names of 32 men were erroneously included in the memorial, and while those names remain on the wall, they have been removed from the databases and printed directories. The extra names resulted from a deliberate decision to err on the side of inclusiveness, with 38 questionable names being included. One person, whose name was added as late as 1992, had gone AWOL immediately upon his return to the United States after his second completed tour of duty. His survival only came to the attention of government authorities in 1996. These survivor names could be removed if the panel their name is on is replaced in the future.[12][13][14][15]

A short distance away from the wall is another Vietnam memorial, a bronze statue named The Three Servicemen (sometimes called The Three Soldiers). The statue depicts three soldiers, purposefully identifiable as European American, African American, and Hispanic American. In their final arrangement, the statue and the Wall appear to interact with each other, with the soldiers looking on in solemn tribute at the names of their fallen comrades. The distance between the two allows them to interact while minimizing the effect of the addition on Lin's design.

The Vietnam Women's Memorial is a memorial dedicated to the women of the United States who served in the Vietnam War, most of whom were nurses. It serves as a reminder of the importance of women in the conflict. It depicts three uniformed women with a wounded soldier. It is part of the Vietnam Veterans Memorial, and is located on National Mall in Washington, D.C., a short distance south of The Wall, north of the Reflecting Pool.

A memorial plaque, authorized by Pub.L. 106–214, was dedicated on November 10, 2004, at the northeast corner of the plaza surrounding the Three Soldiers statue to honor veterans who died after the war as a direct result of injuries suffered in Vietnam, but who fall outside Department of Defense guidelines. The plaque is a carved block of black granite, 3 by 2 feet (0.91 by 0.61 m), inscribed "In memory of the men and women who served in the Vietnam War and later died as a result of their service. We honor and remember their sacrifice."

Visitors to The Wall will take a piece of paper and place it over a name on The Wall and rub a wax crayon or graphite pencil over it as a memento of their loved ones. This is called "rubbing".[citation needed]

Visitors to the memorial began leaving sentimental items at the memorial at its opening. One story claims this practice began during construction, when a Vietnam veteran threw the Purple Heart his brother received posthumously into the concrete of the memorial's foundation. Several thousand items are left at the memorial each year. The largest item left at the memorial was a sliding glass storm door with a full-size replica "tiger cage". The door was painted with a scene in Vietnam and the names of U.S. POWs and MIAs from the conflict.[18] 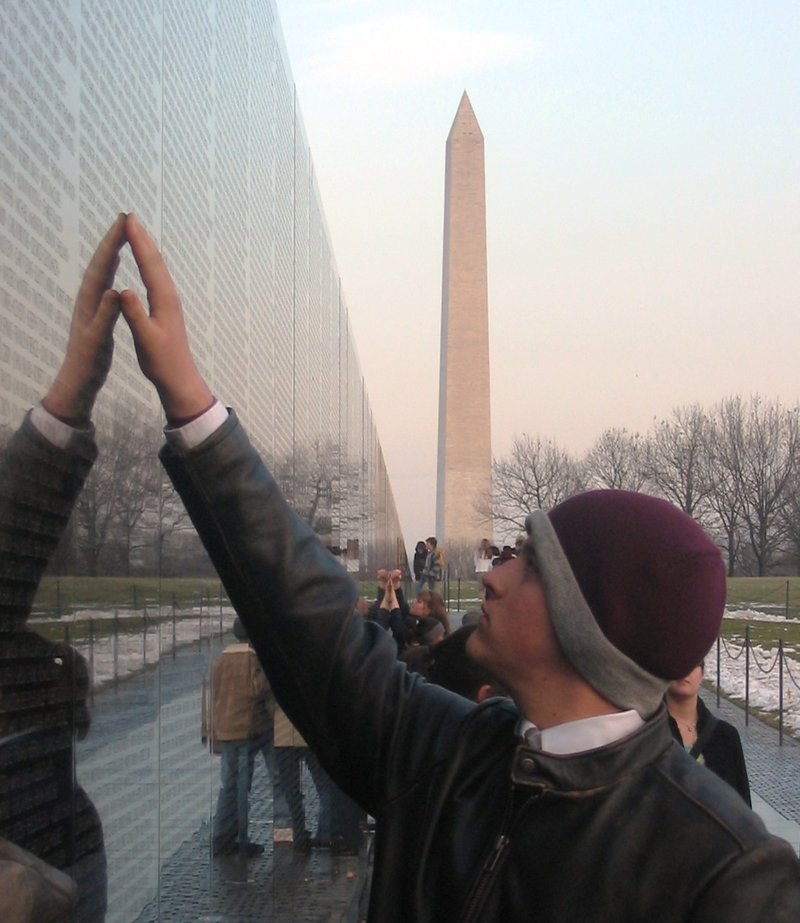 Lt Col John (Jack) Christensen
Posted >1 y ago
First trip to wall was spring of 83 so it was still pretty new. That was a pretty emotional trip for me. Have made many trips since then and they all get to me.
(9)
Comment
(0)

SGT Wayne Smith
12 mo
PO2 Lewis Brockman - I went to see the traveling wall here in Calif a few years back. Yes, I cried like a baby as I found the names of my fallen comrades. I was not ashamed of crying. It was a very emotional and humbling experience.
(1)
Reply
(0)

SGT David A. 'Cowboy' Groth
Posted >1 y ago
Great share brother David, my wife and I got to see the traveling wall when it came thru our little town, found her cousins name, and several of mine on it, very somber exhibit.
(8)
Comment
(0)

SGT Philip Roncari
Posted >1 y ago
I have been to The Wall quite a few times over the years ,for some reason lately I’ve gone alone asking the family to meet me at the hotel or another site in DC ,they seem to understand the old man and his strange ways after all these years.
(4)
Comment
(0)