CSM Michael J. Uhlig
31.4K
604
353
34
34
0
South Carolina police officer investigated after grabbing student and tossing her across the floor. Your thoughts on this?

COLUMBIA, S.C. (AP) — A South Carolina school district banned a school resource officer pending an investigation after a video surfaced Monday showing him tossing a student across a classroom floor.

The incident apparently captured on a student's cellphone happened at Spring Valley High School in Columbia. School officials and sheriff's deputies said they are investigating what happened.

"Pending the outcome of the investigation, the district has directed that the school resource officer not return to any school in the district," Richland Two Superintendent Debbie Hamm said in a prepared statement.

The video shows Fields asking a girl to rise from a classroom desk. Another adult is standing nearby. The girl stays seated, so the officer wraps a forearm around the child's neck. The officer then tips the attached chair and desk backward until she spills to the floor. The officer then tosses the girl several feet across the floor to the front of the classroom where Fields ordered her hands behind her back and applied handcuffs.

"The video then shows the student resisting and being arrested by the" officer, Lott said.

Wilson said later that Lott, who is attending an out-of-town conference, "was very disturbed' by the video but asked for public patience during the investigation.

The images captured an "egregious use of force" against the student, ACLU of South Carolina Executive Director Victoria Middleton said.
I edited to change the title to what I posted originally. It is descriptive and includes a question. To the admin that wants to change the dang title, describe the difference between the title herein above and the one here: https://www.rallypoint.com/answers/florida-police-officer-investigated-after-challenging-us-veteran-over-use-of-disabled-parking-space 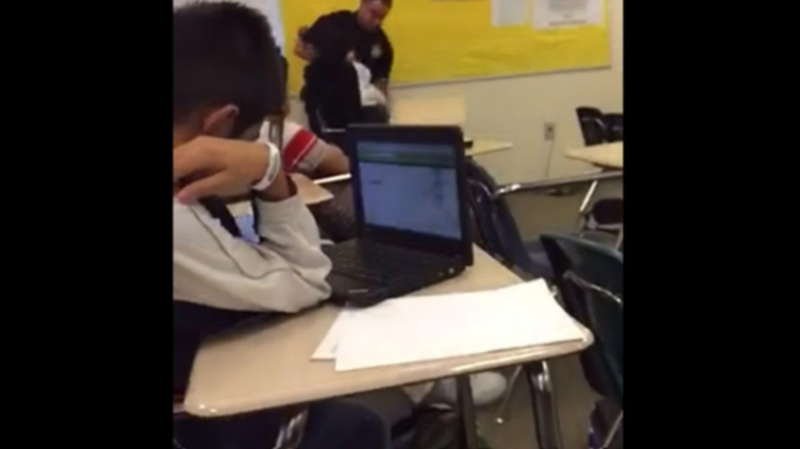 Posted from news.yahoo.com
Posted in these groups:

SPC (Join to see)
>1 y
Great solution SSG, not to try and steal your idea, I actually thought that when I saw it in the news, "why not drag the whole desk out"? Definitely the best way to avoid physical contact.
(0)
Reply
(0)

SPC Luis Mendez
>1 y
Well, with the way things are now a days. Whoever would be holding the door open will be call complicit to whatever discriminatory allegations/claims could be brought against Police.
(3)
Reply
(0)

SGT Rick Ash
>1 y
The young lady struck the officer. If you or I did that we would be charged with assault. She should be charged. There is no telling what she called the officer, even as he approached her. She should be in a juvenile correctional facility. I hope the other students took notice, bad behavior does not go unnoticed. She has zero grounds for any suit against the officer, he did what he is there for....
(2)
Reply
(0)

PO3 Steven Sherrill
Posted >1 y ago
CSM Michael J. Uhlig We watched the video this morning. First the news casters are already putting the spin on it. This is a punk ass kid who was being disruptive. The teacher asked the student to leave the class and she did not. The teacher called for assistance. The student still didn't move. SO the student was moved. These are not items being disputed. The issue I have with this is that it only shows the climax of the situation. It does not show the events leading up to the unceremonious dumping of the desk followed by the dragging of the student.

Sgt Jay Jones
>1 y
CPT (Join to see) - especially when there is no aggression on the teenagers part. Just stubbornness.
(1)
Reply
(0)

SPC Darnella Thompson
7 mo
You can rant all day about what this child may have done prior to the assault. Because that's exactly what it is. Assault to a child. The officer grabbed and dragged her from behind. She couldn't even defend herself. A true coward for lack of better words.
(0)
Reply
(0)

SPC Darnella Thompson
7 mo
SGT John Rauch what if that was your child? You outta be ashamed. To wear a military uniform proudly and say a child deserved assault.
(0)
Reply
(0)

LTC John Shaw
Posted >1 y ago
CSM Michael J. Uhlig Not sure I agree with the conclusion of an 'egregious use of force'. We only have the actual take down on the clip. I am sure there is more to this story and we can't make ever event of restraining a person a national crime.
(20)
Comment
(0)
show previous comments

COL Ward Marshall
>1 y
Agreed, we only have a small part of the incident, the part that helps a few make their point but not enough for us to make an informed decision. Funny how the media feeds on drama and inflammatory half truths.
(2)
Reply
(0)

CPT (Join to see)
>1 y
PO1 Dean Chapman - You can see in the video when he grabbed her around the throat is when her arm swung at him. At any rate, slamming her to the ground and throwing her across the room was excessive if it caused a broken arm and cracked ribs.
(0)
Reply
(1)

SPC Darnella Thompson
7 mo
It doesn't matter the story. You don't put your hands on a child.
(0)
Reply
(0)