What always made the United States Army special to me, was people, Soldiers. From young Soldiers to the most experienced General or Sergeant Major, people are what made our Army. Since my service has retired, I have been lucky enough to meet people who possess the same Army values whether they served in our Army or not. The values of loyalty, duty, respect, selfless service, honor, integrity, and personal courage still lead my decision making process and I know, through exposure and experience with others, these values are still tantamount in your lives also.

Since 14 June 1775 our Army has grown, matured, and been the last line of defense to our Republic. From the Battle of Fort Ticonderoga, the War of 1812, the Civil War, D-Day, the Korean War, the Vietnam War, Grenada, Panama, The Gulf War, The Iraq War, and to the Afghanistan war along with all in between and facing us in the future, our history has been shaped by our values, the blood shed and lives lost to maintain the freedom of our Republic.

Thank you all for your service to the United States of America and the United States Army. Further, thank you for allowing me to know the values I have embraced for 23 years are still being embraced and respected.
Posted in these groups: 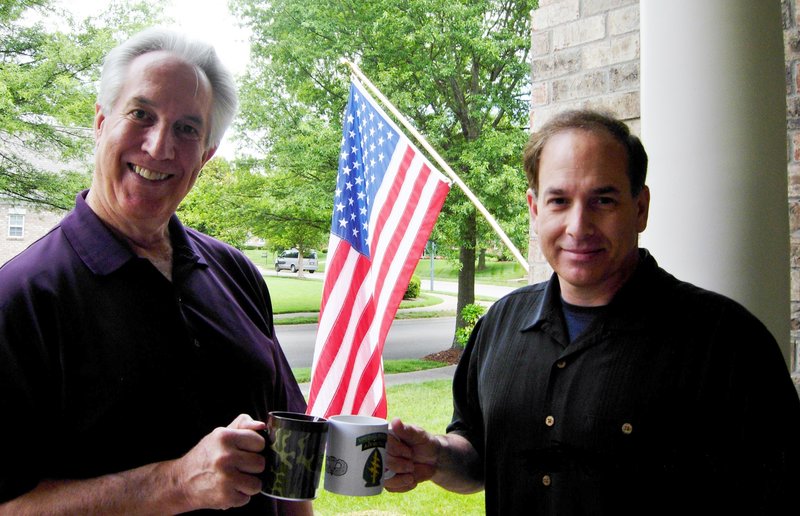 SFC Dr. Joseph Finck, BS, MA, DSS, I celebrated the birthday of the Army and Flag Day with my good friend, COL(ret) Charles Keith, USA! Here we are with our celebratory toast (morning coffee only)!
(4)
Comment
(0) 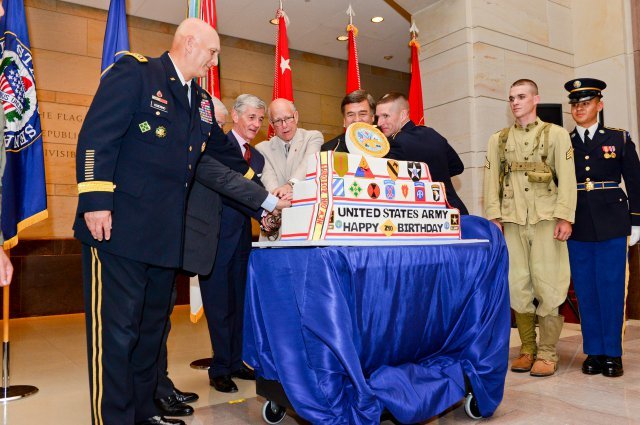 WASHINGTON (Army News Service, June 11, 2015) -- Senior Army leaders gathered in the U.S. Capitol Visitor's Center, June 10, for the first of several cake-cuttings throughout the week in celebration of the Army's 240th birthday, which falls on June 14.

Army Chief of Staff Gen. Ray Odierno kicked off the cake-cutting, making several points to the audience of congressional and senior Army leaders and their staffs and guests. He emphasized that the Army was born before the country's independence had even been declared.

"I believe the Army is the one service that truly represents the diversity and strength of our nation," he said. "Our regular Soldiers, our citizen-Soldiers, our dedicated Army civilians … represent what is best about our country … our diversity and our ability to understand why our nation is different from any other nation in the world because of the freedoms and liberties we fight for."

Odierno thanked Congress for its continuing support and dedication in ensuring the Army has the "right capabilities, equipment and manpower to do the jobs" the country calls upon it to do throughout the world, adding that presently the service represents the United States on all but one continent.

Army Secretary John M. McHugh also thanked Congress for continuing support and praised what he called the unbroken line of great Americans, who donned the cloth of the U.S. Army, which stretches back 240 years. He reflected on the chief's words about the steadfastness of those serving, the dedication of diversity of countrymen, scattered in some 40 nations at some 150 locations worldwide.

"… Doing as they've always done, protecting us, defending freedom and ensuring our way of life … and that's why we're here … that's not a surprise … we're gathered to celebrate that history and that tradition and remember how unbreakable that long line has been."

Before the traditional champagne toast, Senators Jim Inhofe of Oklahoma, Pat Roberts of Kansas and Rep. "Dutch" Ruppersberger of Maryland also spoke, recalling personal and professional relationships with Odierno and McHugh, who will both retire later this year.

Inhofe thanked the Army leaders for their candidness during their years of testimony on Capitol Hill. With a smile, he added "the Army's 241st birthday won't be as happy as the 240th."

Following the cake-cutting, Sgt. Maj. of the Army Daniel A. Dailey spoke about how the country received its "credentials" by the founding fathers as they were creating the U.S. Constitution and calling for a standing Army, an Army, which would protect the interests of the nation.

"Our credentials became the American Soldier," he said. "I remind Soldiers all the time that they are the nation's credentials - that they're one year older than the nation you serve and you must be here and forever endure because that's our job: to always endure."

SFC Russell Campbell
Posted 7 y ago
Amen to all the above. In house whether retired or active, we grumble amongst each other inside the "fortress", but that said, we are still all brothers and sisters under the flag and have all either been on the line of fire, next to it or in line to go. Whether you did one hitch, a career, were in the Guard, Active or Reserve component, you must always know that you became all you can be "CITIZENS" of the republic the moment you took the oath and no matter what other non-serving hacks and sheeple say, you will never be a civilian again. God Bless You All, You Real Americans, past and present! All Accounted For Sir!
(2)
Comment
(0)

LTC Stephen F.
Posted 6 y ago
I concur with you SFC Dr. Joseph Finck, BS, MA, DSS
I served in the US Army from November 11, 1974 to May 28, 2008. While I certainly did not enjoy every minute of my enlisted and commissioned officer time, I am thankful that I was able to wear the uniforms of the US Army and serve my nation in peace and war and all point sin between.
(1)
Comment
(0)
Show More Comments
Read This Next
RallyPoint Home